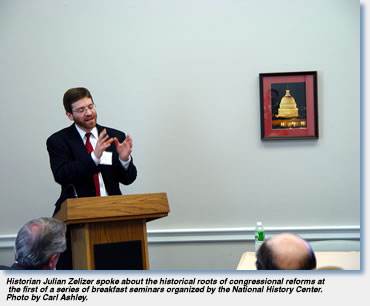 The National History Center's Congressional Breakfast Seminar Series got off to an impressive start on April 18, 2005, with a lively presentation by Julian E. Zelizer, professor of history at Boston University and the author of On Capitol Hill: The Struggle to Reform Congress and its Consequences, 1948–2000 (Cambridge University Press, 2004). The congressional staffers, members of the public, and historians who turned up on Capitol Hill to hear Zelizer were not disappointed. In his talk entitled "The Politics of Reform in Congressional History," Zelizer provided an engaging and thought-provoking discussion of the origin and consequences of congressional reform efforts. The talk thus set the scene perfectly for the new series launched by the National History Center for fostering a heightened historical awareness among policymakers on Capitol Hill.

In his talk, Zelizer described how the reform movement that helped create the Congress we know started out in 1948 as a "liberal coalition" that aimed particularly at promoting civil rights legislation. Made up of Representatives Hubert Humphrey and Eugene McCarthy as well as such groups as Americans for Democratic Action, the Democratic Study Group and the Leadership Conference on Civil Rights, the liberal coalition targeted procedural rules—the filibuster in particular—they saw as the principal tools used by conservatives to block civil rights reforms.

Zelizer pointed out that the reform movement made another great stride during the 1970s when a large class of new legislators—known as the "Watergate Babies"—came to Washington with the intention of changing the way Congress operated. The reforms implemented during the 1970s included stricter campaign finance regulations, securing rights for public interest groups in the administrative process, improving access to information about government, and creating the Office of the Independent Counsel. One of the primary goals of the reformers, according to Zelizer, was to boost the power of the parties relative to committee chairs, increasing the influence of the majority in the legislative process.

Despite the legislative success of such reforms, the changes did not produce all of the outcomes the reformers desired. Zelizer said that increasing the influence of parties contributed not to fostering an environment of bipartisan compromise, but rather to the "fierce partisanship" characteristic of current politics. Moreover, liberals in Congress have not been the only beneficiaries of the reform movement. Since the 1970s, conservatives have proved adept at using the changes to their advantage.

The core of Zelizer's argument is that reforming government is not as easy as most observers imagine. It is "the work of the tortoise, not the hare," Zelizer said, pointing out that individual pieces of legislation cannot change how government functions. The historical process of reform is "messy, slow, and involves multiple institutions coming together at the right time," Zelizer declared.

Making a compelling argument for the study of reform, Zelizer suggests that an understanding of this chapter of our nation's history can help us "improve the institutions that compose our democracy so that they better fulfill the ambitious promises that were articulated in the Constitution."

The second program in the National History Center's Congressional Breakfast Series will be held on on May 23, 2005; Edward Berkowitz (George Washington Univ.), and Alice Kessler-Harris (Columbia Univ.), will speak about the history of the Social Security Administration and the decision-making process that led to its creation. The program will be moderated by R. Bruce Craig, executive director of the National Coalition for History. For details about the breakfast series, contact Miriam Hauss.

*Text corrected in this online edition, 5/12/05. The print version contained an error.