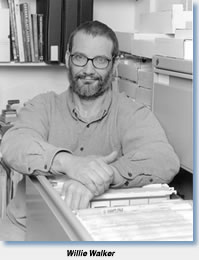 Willie Walker, a founding member of the Gay, Lesbian, Bisexual, Transgender Historical Society (GLBTHS), died of cancer and complications from Hepatitis C at 6:40 a.m. on September 29, 2004. Though Walker had been living at Coming Home hospice in the Castro, at the time of his death he was visiting his sister, Barbara L. Estinson, in Spokane, Washington. Barbara and Kezia and Jesse Vernon, his niece and nephew, were with Walker when he passed. His San Francisco family, many of whom were part of his care circle during his final years of illness, and his many friends across the country mourn Walker’s passing.

Walker was born in Fort Worth, Texas, on February 11, 1949. He spent much of his youth on the move, living for short periods in South Carolina, Tennessee, Missouri, and West Texas. In 1967 Walker moved to Three Forks, Montana. After graduating from Three Forks High School he enrolled at the University of Montana, though he dropped out before finishing. Walker spent a number of years working odd jobs including a stint in the forestry service. During this time he contributed articles to RFD and other gay liberation papers and helped put out Borrowed Times, a New Left publication. In the late 1970s, Walker helped establish and run the Butte-Silver Bow Archives in Butte, Montana. After returning to school in the mid 1970s, Walker earned a degree in nursing; he eventually worked on Ward 5A at San Francisco General, the so-called “AIDS Ward.”

In 1981 Walker moved to San Francisco where he became a member of Solidarity and a served on the board of the Pride Parade. A year after arriving in the Bay Area, Walker joined the San Francisco History Project, a group that included Alan Berube, Jo-Anne Castillo, Jeffrey Escoffier, Eric Garber, Gayle Rubin, and several other scholars. Over the next two decades Walker continued to contribute to the field of gay and lesbian studies, including writing several articles on the history of gay male erotica. His last publication was an introduction for Thomas Waugh’s Lust Unearthed: Vintage Gay Graphics from the DuBek Collection. At the time of his death, Walker was working on a book entitled Male Beauty: Great Photographers of the Physical Culture and Physique Movement, 1920–1970. Always ready to share his knowledge and insight with others, Walker is thanked in countless book and article acknowledgements.

Walker was among the founders of the GLBT Historical Society (www.glbthistory.org), which was established in 1985. When few other institutions, public or private, were collecting GLBT materials, Walker and his colleagues devoted themselves to that task. “We believe,” Walker would later write, “that if queer people do not preserve our own history, most of it will simply disappear.” Walker’s dedication to the GLBTHS was remarkable. In fact, for the first five years of the organization’s existence the GLBTHS archives were housed in Walker’s apartment.

When the archives moved out of Walker’s apartment he followed, serving as the organization’s archivist for a number of years. In the late 1980s, Walker earned a Masters in Library Sciences from the University of California at Berkeley, with a focus on archival management. His accomplishments as an archivist are legion: he helped plan and wrote the guide for a microfilm collection of Bay Area GLBT publications including The Sentinel, the Bay Area Reporter, The Ladder, The Mattachine Review, Vector, Amazon Quarterly, Sonoma County Lesbian and Gay News, and the Bay Times; led workshops in archival methods; developed a database (in conjunction with his friend Eric Garber) of GLBT sites in San Francisco; assisted thousands of researchers; and played a key role in curating a number of GLBTHS exhibits including “Making a Case for Community History” and “Queer and Kinky Danger: Art of San Francisco’s Leather/SM/Kink Worlds.” Walker was forced to stop working in 2000 due to illness. Walker’s papers, which include his research files, photograph collection, letters, journals, and other personal papers have been deposited in the archives that he devoted so much of his life to. Walker has requested that memorials be sent to the GLBTHS.

Walker leaves behind a large number of friends and family. His sister in Spokane, a brother, his mother, and several nieces and nephews survive him. His father and one sister predeceased him as did his partner, Enrique Hermosillo, who died of complications from HIV in 1997. In addition to his biological family, Walker leaves behind hundreds of friends in the Bay Area and beyond.