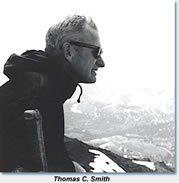 Thomas C. Smith, Ford Professor of History emeritus at the University of California at Berkeley, died in his sleep on April 3, 2004, in Danville, California. He was 87 years old.

Smith was a distinguished historian of early modern and modern Japan; indeed, writes Kenneth B. Pyle of the University of Washington, a former student of Smith, "the Western world has produced no finer historian of Japan." In four major books, Political Change and Industrial Development: Government Enterprise, 1868–1880 (1955), The Agrarian Origins of Modern Japan (1959), Nakahara: Family Farming and Population in a Japanese Village, 1717–1830 (1977), and Native Sources of Japanese Industrialization, 1750–1920 (1988), Smith changed our understanding of the trajectory of Japanese economic development and social change in the early modern and modern eras. In The Agrarian Origins of Modern Japan, he ascribed a major role in the shaping of Japan's modernization to the gradual evolution of the Tokugawa agrarian economy (1600–1868), the change in the village from subsistence production to production for the market and the transformation of family farming. As Kenneth Pyle observed, "his research and writing are critical to our understanding of how it was that the Japanese became the first non-Western people to achieve an industrial society." What was often crucial to Smith's historiography was his willingness to write as a comparative historian; often, in fact, his explorations in Japanese history suggested the necessity of re-examining the assumed universality of the Western mode of industrialization. Yet at the same time, Smith's work could also confirm such universality, but one more broadly conceived. Thus it was, as Smith's colleague Irwin Scheiner recalls, that the Princeton historian Arno Mayer used to assign Smith's Agrarian Origins to his classes in European history in order to explain best the transition to modernity.

Smith's books and articles ranged over a wide span of Japanese history, and his analytical contributions spanned an extraordinarily diverse set of problems in Japan's social and economic history: they included a micro-study of the techniques of population limitation and sex-selective infanticide in a single village in the Tokugawa period, an examination of the seeming paradox in which the samurai aristocratic caste led a revolution to oust itself from power, and the apparent historical anomaly in which early modern economic development in Japan took place in the countryside rather than in urban areas (the assumed site of development in most studies of the Western historical experience). As Osamu Saito of Hitotsubashi University, Tokyo, notes, in addressing this broad range of issues, Smith marshaled an "amazingly wide range of methodologies," and with singular effectiveness "brought the covert structure of the past to light."

Smith's skills as a historical craftsman are legendary, and attested to by generations of former students, colleagues, and scholars. Mary Elizabeth Berry, another of Smith's Berkeley colleagues, describes his published work as "unrivalled in our field and as close to immortal as scholarship gets. The hallmarks of his style are economy, diamond-cutting words in otherwise quiet sentences, and a magisterial union of evidence and argument." Mario Oshima, an economic historian of Japan and translator of Smith's Native Sources, captures well Smith's distinctiveness as a historian when he notes "the coexistence in his work of quantitative, highly statistical analysis with a warm eye for ordinary people."

Born in Windsor, Colorado, Thomas Smith was raised in Santa Barbara, California, graduated from Santa Barbara State College, and received his master's degree in French history from the University of California at Berkeley. He began pursuing doctoral studies in French history at Berkeley, but when World War II broke out, he enrolled in the U.S. Navy language school in Boulder, Colorado, and was subsequently assigned to serve as a Japanese language officer with the Fourth Marine Division.

With the end of the war Smith refused an immediate return to the U.S. and lobbied for an assignment in the occupation. He later would write that his curiosity about Japan and his "generally humane view of the enemy" were partly due to his year-long study of Japanese. "It also occurred to me," he wrote, "that I might improve my postwar employment chances, as well as my qualifications as an historian by taking up the comparative historical study of a problem linking Japan and either France or the United States. I had no concrete idea of what I would compare and slight appreciation of the intellectual problems I would encounter."

Ultimately, Smith had "the incredible good luck to be assigned to the headquarters of the Sixth Army in Kyoto." With minimal duties and the permission of his commanding officer, he had the opportunity to wander the streets, visiting shrines, temples, and gardens; taking in the sights of Kyoto; and talking to Japanese. "I was wonderfully happy and imagined that I might stay in Kyoto permanently."

" Then," he wrote, "things changed unexpectedly." Smith was asked to be an interpreter for two officers from the Navy Department in Washington who had arrived to oversee the dismantling of the cyclotron at Kyoto University, and (however inadvertently) aided in the confiscation of professor of physics Arakatsu Bunsaku's notes on the use of the cyclotron. This invasion of the scholarly activities of Arakatsu so disturbed Smith that his joy in remaining in Kyoto dimmed. Several months later he requested a return to the United States where he was quickly demobilized from Marine service.

Determined to study Japanese history, Smith entered Harvard University, completing his doctoral thesis in 1947. He then was appointed assistant professor at Stanford University, where he remained until his appointment at Berkeley as Ford Professor of Comparative History in 1970. Smith retired in 1987.

Thomas C. Smith was honored with election to the American Academy of Arts and Science. He also was one of the few westerners to be selected for membership in the Japan Academy. He is survived by his wife, the poet Jeanne Melville Smith, two children, Zachary Smith of Loomis, California, and Rachel Smith of San Diego, California, and four grandchildren.