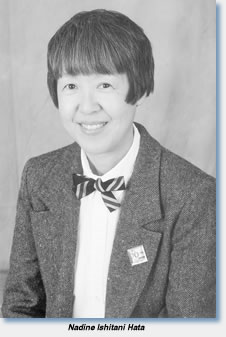 Nadine Ishitani Hata, vice president for academic affairs and professor of history emeritus of El Camino College in Torrance, California, and a former member of the Council of the American Historical Association, died at her home in Redondo Beach, California, on February 25, 2005, after a long struggle with breast cancer. She was 63.

Nadine, a fourth-generation Japanese American or Yonsei, grew up in Honolulu, where she was born in 1941. She took a BA in history from the University of Hawaii (1963). She financed her undergraduate education in part by working in a pineapple cannery. As an undergraduate she noticed that most of U.S. history focused on male Euro-Americans living in the eastern third of the United States. Doing something to change that became one of her life objectives. She went to the mainland and earned an MA in Far Eastern studies from the University of Michigan (1965) and then spent a fellowship year in Japan.

Nadine began her teaching career at California State University at Long Beach in 1967 and also taught at California State University at Dominguez Hills before her move to El Camino Community College as professor of history in 1970. There she became a divisional dean (1984), an acting vice president (1992), and in 1993, vice president for academic affairs. She continued her graduate education in history at the University of Southern California where she earned a PhD in 1983. Her dissertation examined the development of historic preservation in California which, after revision, was published as The Historic Preservation Movement in California, 1940–1976 (Sacramento, 1992).

Her major postdoctoral research and publication centered on the history of Japanese Americans in the continental United States, usually in collaboration with her husband, Donald Teruo Hata, also a historian. Their major joint publication is Japanese Americans and World War II: Exclusion, Internment, and Redress (Wheeling, Ill., 1995). She once assured me that there would be time for more research and publication after she retired and no longer had the heavy teaching and administrative burdens she bore at El Camino and was less heavily involved in various professional activities.

What needs to be understood about Nadine's wide-ranging professional activities is that they were driven by the same concerns about race and class that inspired her other historical interests. She worked hard to create space for community college historians within the historical profession both in her service on the AHA Council and as chair of the Organization of American Historians' ad hoc Task Force on Two-Year and Community Colleges and as the first chair and member of the resultant Committee on Community Colleges between 1993 and 1999. She also served on numerous California state boards concerned with both history and historic preservation, and on the California Advisory Commission of the U.S. Commission on Civil Rights.

As chair of the State Historical Resources Commission she supported securing historic preservation status to the purpose-built World War II U.S. War Relocation Authority concentration camps for Japanese Americans at Manzanar and Tule Lake and to numerous temporary assembly centers located at existing facilities such as racetracks and fairgrounds throughout the state. She closed her statement on "Why Study History" for the AHA's web site with the following words:

Contemporary American society is a multicultural mosaic with enormous resources that can enrich us all. Unfortunately, too few of these diverse dimensions are represented in the ranks of professional historians. And therein lies both the need and opportunity for you to join in making American history and America's historians realistically reflective of all people of the United States.

She is survived by her husband of 38 years, Donald Teruo Hata.

Nadine Ishitani Hata was a scholar and a teacher, a top-flight administrator, and a tenacious advocate of civil rights and educational causes, as well as a wonderful colleague, mentor, and friend.

Nadine Iku Ishitani was the eldest of four sisters in a hard-working family in Wahiawa, an agricultural town near Honolulu. Her parents never finished high school because they had to work to support their families. Yet they believed that in order to succeed in life, Japanese American women would need a solid educational foundation, and the entire family worked to support the daughters' schooling. Nadine herself worked on the assembly line of a pineapple processing plant where she hand-trimmed fruit for export. She was the first member of her family to complete a college education.

Reflecting on her early years, Nadine later said that her "grubby and exhausting job" in the pineapple plant "did more than simply pay for books and tuition. It served as a reality check that alerted me to the omissions and distortions that made American history irrelevant to me." She entered graduate school to discover a past that was more relevant to her experience as an American woman of Japanese ancestry.

While in Japan on an academic fellowship, Nadine met a dashing young man named Donald Teruo Hata Jr., a Japanese American historian from Los Angeles who had also won a fellowship supporting study in Japan. The two budding scholars soon became fast friends. Departing from Japan they traveled together aboard a Soviet freighter to Siberia, then took the Trans-Siberian Railroad across the Soviet Union. After returning to the United States, they married in Los Angeles (1966) and began a joint career of teaching, research, and public service.

Nadine Ishitani Hata was a woman of many talents. That she was an unusually effective administrator is clear from her two decades of deeply appreciated administrative service at El Camino College. Indeed, when she retired from the college in 2004, the board of trustees of the college not only designated her emeritus professor of history, they also bestowed upon her the unprecedented title of Emeritus Vice President of Academic Affairs.

Even as she devoted increasing portions of her time to administration and public service, Nadine remained active as a scholar. Most of her publications followed from the sense, which she developed early in her career, that historical scholarship had largely overlooked the experiences of minority groups. For three decades she collaborated with her husband Donald to redress the balance and contribute to a more inclusive understanding of the past through writings that explored Asian American and Japanese American experiences. Their coauthored works include a book on Japanese Americans and World War II: Exclusion, Internment, and Redress (1995) as well as numerous shorter writings. Their essays focused both on colorful individuals such as "George Shima, the Potato King of California" and on serious issues such as racism, discrimination, and the wartime internment of American citizens of Japanese ancestry.

I first met Nadine when we both worked on a project to build model syllabi for world history and Western civilization courses in the two-year college. She was chair of the world history section, and I was chair of the Western civilization part. We had many delightful exchanges of ideas on the subject, and I remember too her rueful good humor when the project collapsed for reasons unconnected with us. We worked together again, later, when we collaborated on the book, Community College Historians in the United States.

Nadine, who always went the extra mile to encourage community college faculty, set the best example for what one could do despite punitive teaching loads and near invisibility in the larger academic world. Indeed, when Lee Formwalt asked her in a recent interview to look back over her career and say which of her accomplishments gave her the most satisfaction, Nadine said that it was her advocacy of the cause of community colleges, urging that their faculty be treated as equal partners in the academic world (see the complete interview in the February 2005 OAH Newsletter).