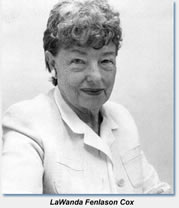 LaWanda Fenlason Cox, who passed away February 2, 2005, in her home in New York City at the age of 95, was one of the most distinguished, respected, and influential historians of her generation. Her books and articles on Abraham Lincoln, emancipation, and Reconstruction had a profound impact on historical scholarship and became classics that are read by historians in the 21st century.

Born in Aberdeen, Washington, on September 24, 1909, LaWanda Fenlason earned her BA at the University of Oregon in 1931, her masters from Smith College in 1934, and her PhD from the University of California at Berkeley in 1941. At Smith, she studied with Merle Curti, the pioneering social historian whose commitment to social justice deeply influenced her. Curti became a lifelong friend.

In 1940, Cox came to New York City, where her husband, John Cox, accepted a teaching position at City College and she a position at Hunter College. Except for a brief stint at Goucher College in Baltimore (1944–46), she was a member of the history faculty at Hunter and the City University of New York's Graduate Center until her retirement in 1971. She was a legendary teacher at Hunter, influencing two generations of students there.

As a doctoral student at Berkeley, Cox studied with John Schuster Taylor, the economist who collaborated with the great documentary photographer Dorthea Lang to study of the plight of the impoverished agricultural workers who migrated to California to escape the ravages of the Dust Bowl and Great Depression. Taking up Taylor's challenge, Cox completed a pioneering study of agricultural labor in the United States as her dissertation.

Cox's work on agricultural labor led her to study the plight of former slaves in the post-Civil War South and, ultimately, Reconstruction policy and politics. Her scholarly writing dramatically revised understanding of Reconstruction. Civil rights was the era's defining issue, she demonstrated, not merely a product of Republican vindictiveness toward the South or a smokescreen to obscure the party's efforts to advance the interests of big business.

The most complete and eloquent statement of her position came in Politics, Principle, and Prejudice, 1865–1866: Dilemma of Reconstruction America, which was published in 1963 by the Free Press and won the American Historical Association's John H. Dunning Prize. Subsequent work, including Reconstruction, the Negro, and the New South, published by Harper & Row in 1971, extended the argument to emphasize the far-reaching—if hotly contested—changes Reconstruction era civil rights policy effected.

Cox was also a highly influential Lincoln scholar. In Lincoln and Black Freedom, which appeared in 1981, she boldly challenged the reigning scholarly consensus that held that Lincoln was, at best, a reluctant emancipator. Cox argued that Lincoln's circumspect and indirect style of leadership—while highly effective in advancing the cause of black freedom—had misled historians about his commitment to emancipation and critical role in achieving it. While acknowledging the role African Americans themselves played in ending slavery, her characteristically meticulous research and careful reading of the sources made a compelling case for Lincoln's pivotal role in emancipation and commitment to civil rights for the former slaves.

Throughout the 1980s, Cox remained an active scholar, conducting research and publishing essays that examined the demise of Reconstruction and the nation's failure to achieve substantive freedom for former slaves. She also conceived and guided the Symposium on Emancipation and Its Aftermath, which met annually in New York City from 1979 to 1989. A lively forum, it offered an opportunity for scholars to present work-in-progress and served as an incubator for a number of important studies that appeared in the 1980s and 1990s.

Failing vision brought an end to Cox's historical research and writing in 1989. Nevertheless, in a career that spanned almost 50 years, she left an indelible imprint on the fields of Reconstruction, Lincoln studies, and American history more generally. While some of her contemporaries published more, few produced scholarship that equaled hers in its originality, depth of research, analytical power, and enduring significance. Few historians of any generation can equal the crisp lucidity of her writing and analysis.

And perhaps no historian was as generous in nurturing the work of young scholars.

She was preceded in death by her husband, John Cox, and is survived by her niece, Joan Mason of Los Angeles.