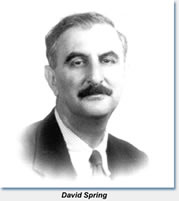 David Spring (1918–2004), professor of history at Johns Hopkins University for 40 years, died November 12, 2004. Born in Toronto, Canada, Spring was educated at the University of Toronto and received his PhD at Harvard University in British history. He came to Johns Hopkins in 1949 and was a member of the history department until his retirement in 1989. He was the recipient of numerous awards, including fellowships from the Ford Foundation, the Guggenheim Foundation, and the NEH. He was also a fellow of the Royal Historical Society of Great Britain.

Professor Spring was a historian of the social and economic history of Great Britain in the 19th century, with a special interest in English landed society. His publications include The English Landed Estate in the Nineteenth Century (1963); European Landed Elites in the Nineteenth Century (1977), with Eileen Spring; Ecology and Religion in History (1974); and numerous articles on his "Lords of Bladesover," whom he brought to life with the skill of a Victorian novelist. The dukes of Bedford, Northumberland, Buckingham, the earls of Fitzwilliam and Durham, the Grahams, Grenvilles, not to forget "Ralph Sneyd, country gentleman" were not only improving landlords and shrewd accountants, but also the most versatile and quirky group of English men and women of an elite known for its eccentricity.

Spring trained 16 completed PhDs, eight of whom published their dissertations in British history and three of whom became leaders in the field. As one of his first graduate students, I can attest to his reputation as an exacting and meticulous mentor, giving attention not only to the organization and argument of the dissertation, but also to the quality of evidence and clarity of style. Spring always kept abreast of the latest issues and techniques of socio-economic history ranging from demography and prosopography to social mobility and professional identity, treated with the proper dose of skepticism. With his wife, Eileen Spring, David developed a keen interest in legal history and the family settlement, so crucial to the survival of the British aristocracy.

David Spring was urbane, a witty and ironic lecturer, the perfect Victorian gentleman.