The Trouble with Film 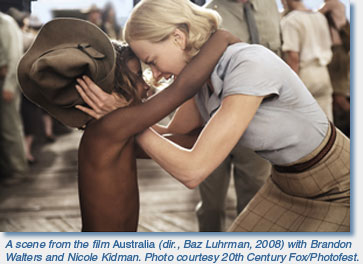 I’m wary of film. That’s not to say that I don’t enjoy film. On the contrary, I use film in my classes, and I use it to relax. I’m not film-averse, just film-suspicious. Why so? The visual and narrative power of film, the sheer grandness of the film aesthetic, the compression necessary for something that generally lasts no more than a couple of hours brings in its wake a fair few problems. Reason and film are not always comfortable partners. There are times, of course, when that’s just what’s needed: the willing suspension of disbelief can be a welcome respite from time to time. But the visual seductions of film can have a reductive effect, and perhaps especially in historical films. The brevity of a film necessarily compresses, forcing the viewer to grasp and grab everything on offer with little time for reflection, caution, or skepticism. The vividness of a gripping film comes too often with a concomitant loss of subtlety, the price we pay for the driving narrative and grand intensity that are so often the delight of a movie. Film, I would argue, tends to rely on the visceral.

It would be easy to dismiss film on such grounds but I don’t see that as an option, not in an age in which the medium is so dominant, and where the verity of film’s historical depictions often goes unchallenged. The loss of subtlety I’m describing above does not, for a minute, mean that film does not convey messages and values, more that as a medium it tends to over-simplify. That’s where my wariness comes in—the intensity and sheer opulence of the medium can have a blurring effect. Film fashions contemporary debates even as it entertains us, but its influence can drain such debates of complexity, offering up such beguiling simplicities as “good” and “evil,” and other binaries in an attractively simple package.

My intent here is to look at a few major box office successes where skilled technique, superb acting, and seriously gorgeous cinematography threaten to eclipse recognition of a permeating self-congratulatory liberalism, in which the actions of key individuals signal larger concerns. My particular interest is in tracing attitudes to race, since this issue has become commonplace in what we might call “conscience films.” I’m deliberately concentrating on mainstream films for these are the visions and views of history that most people will see. The very success of these films (none of them Hollywood productions, but all of them box office hits) makes them an important part of modern culture.

Take, for example, the 2002 German film Nirgendwo in Afrika (released in English as Nowhere in Africa), directed by Caroline Link. The film won a slew of awards in Europe and the United States, including an Oscar and a Golden Globe for best foreign language film. The narrative is fascinating, telling the little-known story of Jews who fled from the Nazis in the 1930s for colonial Kenya. The narrative revolves around one such family’s efforts to run a farm. The film is beautifully made, the acting is excellent, and the story is absorbing. The film did fabulously at the box office. Yet ultimately it falls back on two of the most powerful—and frequently unchallenged—of Western stereotypes: one, the racist white woman whose presence in the colonies disrupts an ostensible interracial harmony among men, and two, the good but essentially untamable noble savage who is, needless to say, the central African character in the film. Juliane Köhler plays Jettel Redlich, the spoiled bourgeois beauty who slowly sheds her racism and learns to love Africa and Africans. The intent here is, of course, to ironize the hounded Jew blithely treating Africans in a manner not so far removed from the Nazi anti-Semitism that drove her from her natal land. But there is a history here, a long history, which lays the blame for interracial tension on the arrival of women in the colonies. It was female disapproval of racial mixing—social as well as sexual—that many blamed for the rigid social codes that came to define colonial sociality, and the film uncritically replicates that assumption. The character of the family’s sometime cook, the Kenyan, Owour, played by the late Sidede Onyulo, combines the uncomfortable archetype of the noble savage with the fidelity of an Uncle Tom. The cook is a sage and patient figure who knows that Jettel will come around, who returns to help when the family is near destitute, and who conveniently removes himself before dying. The portrayal is, I assume, supposed to be ennobling, contrasting Jettel’s petty prejudices with Owour’s ability to see, and ultimately produce, good. But both characters reproduce stereotypes that allow the film to end in a dramatically satisfactory way with Africa and Europe now symbolically understanding one another.

David Lean’s 1984 adaptation of E. M. Forster’s influential novel, A Passage to India, falls into traps Forster manages to avoid in his critical, if ambivalent, reading of colonialism. The 1924 novel, often hailed as one of the early modernist novels in which uncertainty replaces resolution, does not offer us an easy happy ending. Lean’s version, on the other hand, rewrites the final scenes of the novel to bring about an East-West reconciliation read through male friendship (of Fielding and Aziz) but brokered by women (the late Mrs. Moore essentially channeled through her daughter, Stella). Both this and Nowhere in Africa boast seriously good acting, unforgettable cinematography, and much else to praise besides, but their inability to dispense with long-held Western stereotypes lurks disturbingly beneath their beauty.

These films attempt to combine their aesthetic with a liberal humanism critical of racism and blind prejudice, one that yearns for reconciliation between cultures that have historically misunderstood one another. The viewer is supposed to come away with a feel-good glow, helped along by all that beauty and visual sumptuousness, and it’s this that brings me back to my guardedness about film as a medium. It’s easy to be lulled, to be persuaded by films like these, that a smidgen of individual good will can wipe away long-held historical mistrust. The compression of complex events, the necessarily swift building of plot and character and circumstance flatten and reduce history, and in the case of films such as these, evoke what Geoff Eley has memorably called an “incorrigible whiteness” in their evasion of the harsh consequences of colonial power.1

Two recent films powerfully exemplify this valorization of white individualism. Baz Luhrmann’s 2008 epic, Australia, has a hard-bitten white cattleman—the hero of the film, Drover, played by Hugh Jackman—worrying about the distinction between the terms “native” and “aborigine.” The idea that a cattle herder working in the Australian outback in 1939 would attend to such niceties is about as likely as the scene toward the close of the film where Drover’s Aboriginal brother-in-law (another unlikely scenario), Magarri, risks his life so that Drover can rescue a group of marooned children from the horrors of Japanese internment. The faithful black sidekick dies heroically while the white hero gets the girl and a whole lot more.

White heroism is also the subject of Michael Apted’s recent film, Amazing Grace. The film focuses on the life of the abolitionist William Wilberforce, and while it minimizes Wilberforce’s particular brand of Christianity, its portrayal of the politics of the day is lively and gripping. It is, however, disturbing that a film about abolitionism released in 2006, can muster only one black character, and that it presents the cause of abolition as forged almost exclusively in a parliamentary framework. There is no doubt that Amazing Grace is a powerful indictment of slavery, just as the other films discussed here decry prejudice. And perhaps for some viewers they succeed, but insofar as they do, it is at the expense of a more nuanced and complex exploration of colonialism, of racism, of the historical variants of divisiveness.

These four films (and many more besides) are tied together by their intent to offer a critique of white cruelty, white indifference, white inhumanity. The convoluted arguments of politicians in favor of the slave trade, the casual brutality visited on Aboriginal Australians, the racial exclusivity of Anglo-Indian society—all these are portrayed unflinchingly in these films and yet, in the end, it is individual honor or vice that drives their narratives—at least when exploring the personalities of white characters. For the relatively few black and Indian characters that people these films, stock depictions are far more the norm. They are permitted no character arc: not for them the development, the evolution, the progress we witness in Wilberforce, Jettel, or Sarah Ashley (Nicole Kidman’s central role in Australia). For all their good intentions, the box office realities for films such as these demand that the bulk of the attention and interest remains on the white faces. Film, it would seem—in all its glory and gorgeousness—voices a pervasive liberal individualism.

Could this be different? Yes, of course. But the economic realities of the modern film industry—whether viewed in terms of production or consumption—make radical change in mainstream filmmaking unlikely. The very success of the industry lies at the heart of the matter: easy sentimentality reproduces as well on screen as the photogenic faces and landscapes that also bolster its success. The heroic or villainous figure is an easier fit in a 90-minute production than a complex examination of systems and structures and that, for me, is the trouble with film. History will always be malleable and always marketable; that potent combination frames the historical film as much as it continues to frame a good deal of our historical practice.

Philippa Levine is the Mary Helen Thompson Centennial Professor in the Humanities at the University of Texas at Austin. She is the author, among other books, of The British Empire: Sunrise to Sunset and Gender and Empire (a companion volume to the Oxford History of the British Empire).