Putting Academic History in Context: A Survey of Humanities Departments

Before the present economic crisis, history departments were hiring more tenure-track faculty than they were losing by attrition, and they were conferring tenure on their faculty at a much higher rate than counterparts in other humanities fields.

These are some of the key findings from a just-released 2007–08 survey of departments in eight humanities disciplines released recently by the American Academy of Arts and Sciences (AAAS). The survey was conducted by staff at the American Institute of Physics as part of the AAAS Humanities Indicators Project (available online at www.amacad.org/projects/indicators.aspx).

The numbers reported are based on a sample survey, however, so they represent statistical estimates, and should be read as approximations of reality. Nevertheless, by comparing these results to other available surveys from the federal government and the AHA, we can have a high level of confidence in their findings.

Comparing History to the Other Humanities

The authors of the study calculate that as of fall 2007, there were 929 history departments in 4-year colleges and universities with 15,360 faculty. Among the humanities departments surveyed, history was smaller than the departments of languages (which had approximately 30,680 faculty in English language programs and 23,320 in foreign language departments), but significantly larger than the other disciplines and subjects surveyed—religion, art history, linguistics, and the history of science. Religion departments, for instance, had just 5,019 faculty.

The survey shows the wide variations among the different departments that comprise history in higher education. Broken down by highest degree conferred (Figure 1), a majority of history departments (554 of the estimated 929) confer the baccalaureate degree as their highest degree. In comparison, only 171 confer a doctorate as the highest degree. 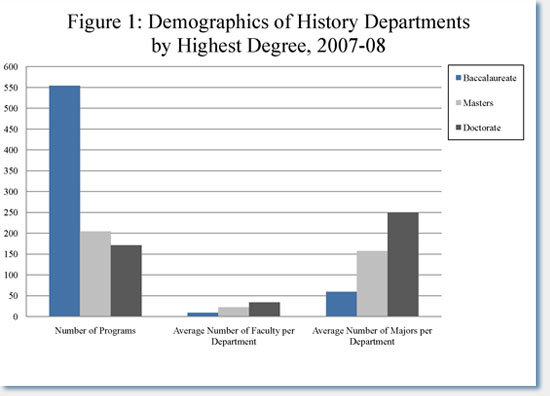 The survey indicates that the proportion of history faculty employed on the tenure track in four-year colleges has been essentially unchanged—and has perhaps improved—since the last significant survey of faculty. A federal survey conducted in fall 2003 indicated 69 percent of history department faculty at four-year institutions were employed on the tenure track or with tenure. The more recent survey estimates that 74 percent of the history department faculty are employed in tenure-eligible positions. Two-thirds of the faculty working off the tenure track (18 of 26 percent) were employed part time. Because the data for the new survey was gathered using a different method, the apparent differences between the survey results should be read with some caution. Nevertheless, it is clear that history has done well in retaining tenure-track positions. 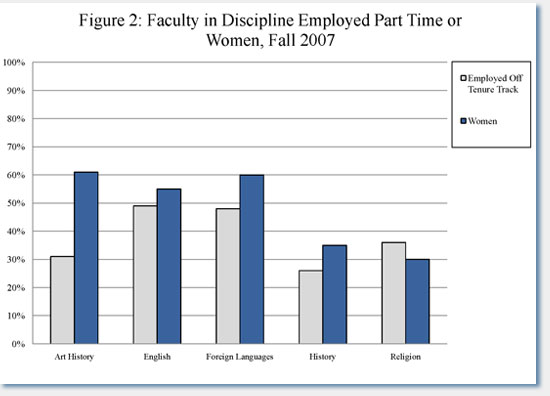 The recent gains bring the proportion of women faculty in departments into closer parity with the ratio of women among those receiving history PhDs over the past decade (currently running at a little over 40 percent of all new history PhD recipients).

Despite these recent increases in the proportion of women faculty, the gender composition of history departments remains very different from the other humanities. In the languages and art history, for example, 55 percent or more of the departmental faculty were women.

Happier Times for Hiring and Tenure

The survey indicates that just before the economic crisis hit higher education, history departments hired more faculty than they lost through retirement, death, or other causes. The survey reports a turnover rate of almost five percent of all history faculty in the two years prior to the survey.

The authors of the report estimate that an average of 430 faculty left their departments in the previous two years, but the departments recruited an average of over 640 new faculty (for the 2007–08 and 2008–09 academic years). Of course, not every position advertised resulted in a hire, but it still reinforces the evidence from our other surveys that there was a net growth in hiring to history departments prior to the recent round of budget cutbacks and hiring freezes.

Among those faculty already hired, the survey shows an exceptionally high rate of tenure in history departments, as around 98 percent of the historians coming up for tenure received it. This is a higher rate of tenure than indicated in an earlier AHA survey, which had found that 94 percent of history faculty coming up for tenure received it. In comparison, other humanities disciplines had a tenure rate of close to 90 percent, and in the case of the foreign languages, as low as 84 percent (Figure 3). 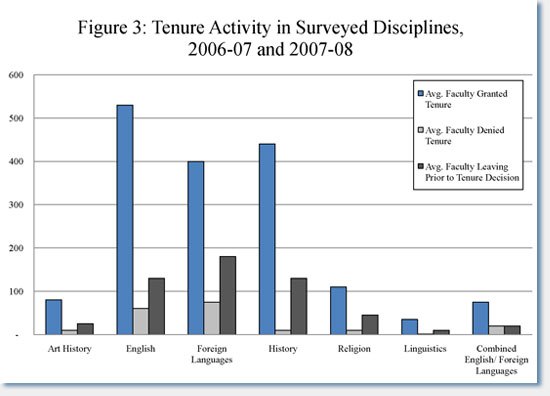 Unlike the AHA study, this survey also asked departments to report on the number of faculty who left before they came up for tenure. The departments reported that almost 22 percent of the faculty coming up for tenure left prior to the start of the tenure process.

This brings the success rate for junior faculty closer to the norm in the other humanities disciplines. Among most of the surveyed disciplines, between 18 and 22 percent of the tenure-eligible faculty left prior to tenure. Religion and foreign language programs were the exception here, as 27 percent of their junior faculty left prior to the start of the tenure process.

The survey offers some modest information on the number of students in the different departments. Unfortunately, the questions about enrollments in undergraduate classes did not elicit a valid set of responses (due to an effort to distinguish between upper- and lower-division courses). But the study does provide useful comparative evidence about the number of bachelor’s degrees completed, the number of majors in each program, and the number of graduate students. 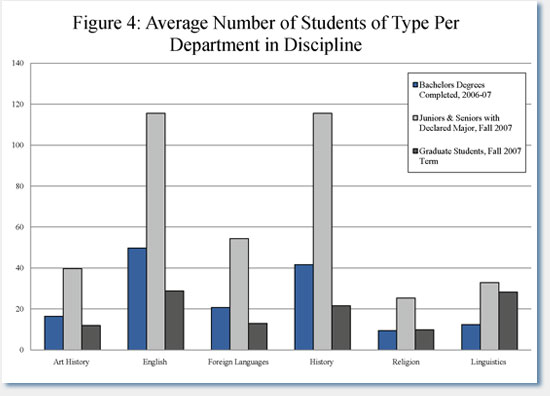 Curiously, the authors of the report estimate an almost equal number of students majoring in the subjects of history and English. The number of students earning degrees in history has been growing much more rapidly than English in recent years, but it remains a long way from surpassing English in the number of degrees conferred. (As of 2006–07, English programs conferred 55,122 degrees, as compared to 34,446 in history.)

Note that the total estimated number of undergraduate degrees conferred was more than 10 percent higher than the number reported by the U.S. Department of Education for the same year. This is explained by the variety of other specialized degrees conferred by many history department, such as teaching degrees, which are classified elsewhere in the federal government’s tabulations.

Robert B. Townsend, the AHA’s assistant director for research and publications, served on the steering committee for the survey of humanities departments. Some of the figures accompanying this article were prepared for a report published on the AAAS web site.