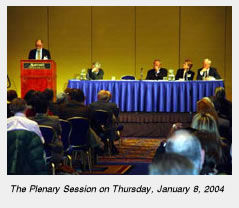 Washington, D.C., with its myriad monuments, research centers, universities, archives, libraries, and art galleries, is always a particularly attractive destination for the visiting historian. Add the intellectual pleasures of an AHA annual meeting to the mix, and the attraction becomes even stronger. Thus it was that more than 5,300 historians, braving the winter cold and occasional rain, turned up to attend the 118th annual meeting of the AHA, held January 8–11, 2004. The meeting hotels—the Marriott Wardman Park, the Omni Shoreham, and the Hilton Washington—filled up fast, and some had to stay in more distant hotels (but with the convenience of shuttle buses to ferry them to the sessions).

The meeting, although formally scheduled to start on Thursday, January 8, commenced a day earlier this year with a new (for the AHA) concept—the pre-meeting workshop. The first of these focused on online history scholarship, and brought together content producers, editors, publishers, and other experts, as well as acolytes of the new media. The well-attended workshop explored—over two days—such themes as the impact of electronic publishing on academic writing, challenges faced by journal editors, and the choices confronting practitioners of "e-history." (A detailed report on this workshop will appear in the April issue of Perspectives.) The second pre-meeting workshop, held on Thursday, was on the theme of graduate education in history, and revolved around the report of the AHA's Committee on Graduate Education, published as The Education of Historians for the Twenty-first Century. A detailed report on this workshop appears in this issue.

The meeting proper got off to a glittering start on Thursday evening at 7:30 p.m. with a plenary session that began with the conferral of the AHA's inaugural Theodore Roosevelt–Woodrow Wilson Award for Public Service upon Senator Robert C. Byrd (D-W. Va.). Senator Byrd, whose untiring efforts on behalf of the discipline of history were recognized by the award, said that history has been a constant inspiration and guide to him. Senator Byrd regaled the large gathering with anecdotes about the impact of history upon his rich and varied life. After the award ceremony, the plenary session continued, with presentations on the theme, "Thought on War in a Democratic Age." Peter Paret (Institute for Advanced Study, Princeton), Isabel Hull (Cornell Univ.), and Michael Geyer (Univ. of Chicago) explored the many dimensions of war in modern times, ranging from the genealogies of theoretical discourse about war to the implications of total war. Charles Maier (Harvard Univ.) chaired and Suzanne Marchand (Louisiana State Univ. at Baton Rouge) commented upon the papers.

The main attractions on Friday were the awards ceremony and the presidential address. Jonathan Spence, president-elect for 2003 announced the prizes, and President James McPherson gave away the honors and prizes (see citations starting on page 33). After the presentation of the awards, McPherson delivered his presidential address entitled "No Peace without Victory, 1861–1865, "in which he examined the question why nations find it harder to end a war than to start one—thus setting up resonances between his investigations of that period and contemporary events. Meticulously detailing in measured tones the roles played by the chief actors—Abraham Lincoln, William Seward, and Jefferson Davis, among others, McPherson discussed the reasons why there could not be a negotiated settlement of that conflict (see the February 2004 issue of the American Historical Review for the text of McPherson's address).

The most important element of any annual meeting is, of course, the academic session. Not surprising;y, the majority of the panels this year revolved around the meeting theme, "War and Peace: History and the Dynamics of Human Conflict and Cooperation." But there were others too. From the intriguingly titled panel, "Sex in the Service of Society," to the more traditional sounding "North America in the Gilded Age and Progressive Era," or panels that focused on practical matters—on responding to plagiarism in the classroom, for instance, or on the role of historians in contemporary political debate—there was a wide variety for the discerning scholar to choose from. Well-attended presidential sessions and a host of sessions organized by the various affiliated societies provided even more options for the attendees.

Despite an early starting hour, the breakfast meetings held during the annual meeting attract large numbers every year because of the speakers or because of the theme. The meeting of the AHA Committee on Women Historians, held on Saturday, January 10, at 7:30 a.m., with Alice Kessler-Harris of Columbia University as the speaker, for example, attracted a large crowd. In her moving speech entitled "Coalitions of the Imagination," Kessler-Harris examined the tensions between the imagined coalitions that built the unifying forces of feminism on the one hand and the practices—based as they were on fragmented identities—that created fissures of division on the other. The breakfast meeting of the Committee on Minority Historians (held on Friday), a mentoring get-together with minority graduate students and first-year faculty, also drew a large gathering.

At the AHA's 118th Business Meeting, held on Saturday, January 10, 2004, the reports of the executive director, the division vice presidents, the nominating committee, and the editor of the AHR were presented. Two resolutions were presented to the meeting and were adopted (see page 19 for the text of the resolutions). The first, affirming the rights of free speech and open access to records, was adopted unanimously; the second resolution, regarding the Graduate Employee and Students Organization at Yale University, generated some discussion, and required a vote (which was preceded by a quorum call). Michael Les Benedict, AHA's Parliamentarian, ensured—referring to Robert's Rules of Order when necessary—that the proper procedures were followed. 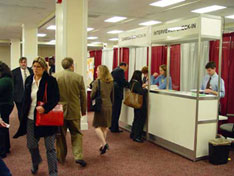 The Job Register managers, Liz Townsend and David Darlington, drew upon their cumulative experience in running Job Registers, and with the support extended to them by the Local Arrangements Committee staff, ably ensured that the entire process was smooth and efficient. 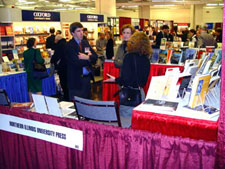 More than 100 publishers and booksellers participated in the book exhibition (held in the Marriott's Exhibit Hall A). A large number of casual browsers, authors with manuscripts in search of acquisition editors, and eager booklovers taking advantage of the special discounts and collecting totebags full of bargains—especially on the last day—thronged the exhibit hall through the entire time it was open.

A Meeting to Remember

No massive undertaking such as this can escape the inevitable hiccup and so it was with the 2004 annual meeting: a flooded hotel corridor on the last day, a fire alarm, the occasional missing panelist or chairperson; but these were all minor glitches in a complex operation which was—judged from any angle—altogether a successful one. It was made so by the work, mostly behind the scenes by Sharon K. Tune, the AHA's convention director; her colleague, Debbie Ann Doyle; the able and unstinting support of the rest of the AHA staff (who all cheerfully take on different roles and responsibilities during the annual meeting); the 2004 Program Committee chairs, Joe W. Trotter (Carnegie Mellon Univ.) and John Thornton (Millersville Univ. of Pennsylvania); and Robert Griffith (American Univ.), chair of the Local Arrangements Committee, and his colleagues; and, above all, Arnita A. Jones, the executive director of the AHA.