History as a discipline remains at the forefront of contemporary culture wars, and many historical organizations are just beginning to recover from the impact of COVID-19. James H. Sweet (Univ. of Wisconsin–Madison) faces daunting challenges and exciting opportunities as he leads the Association and the history discipline as 2022 president of the AHA. 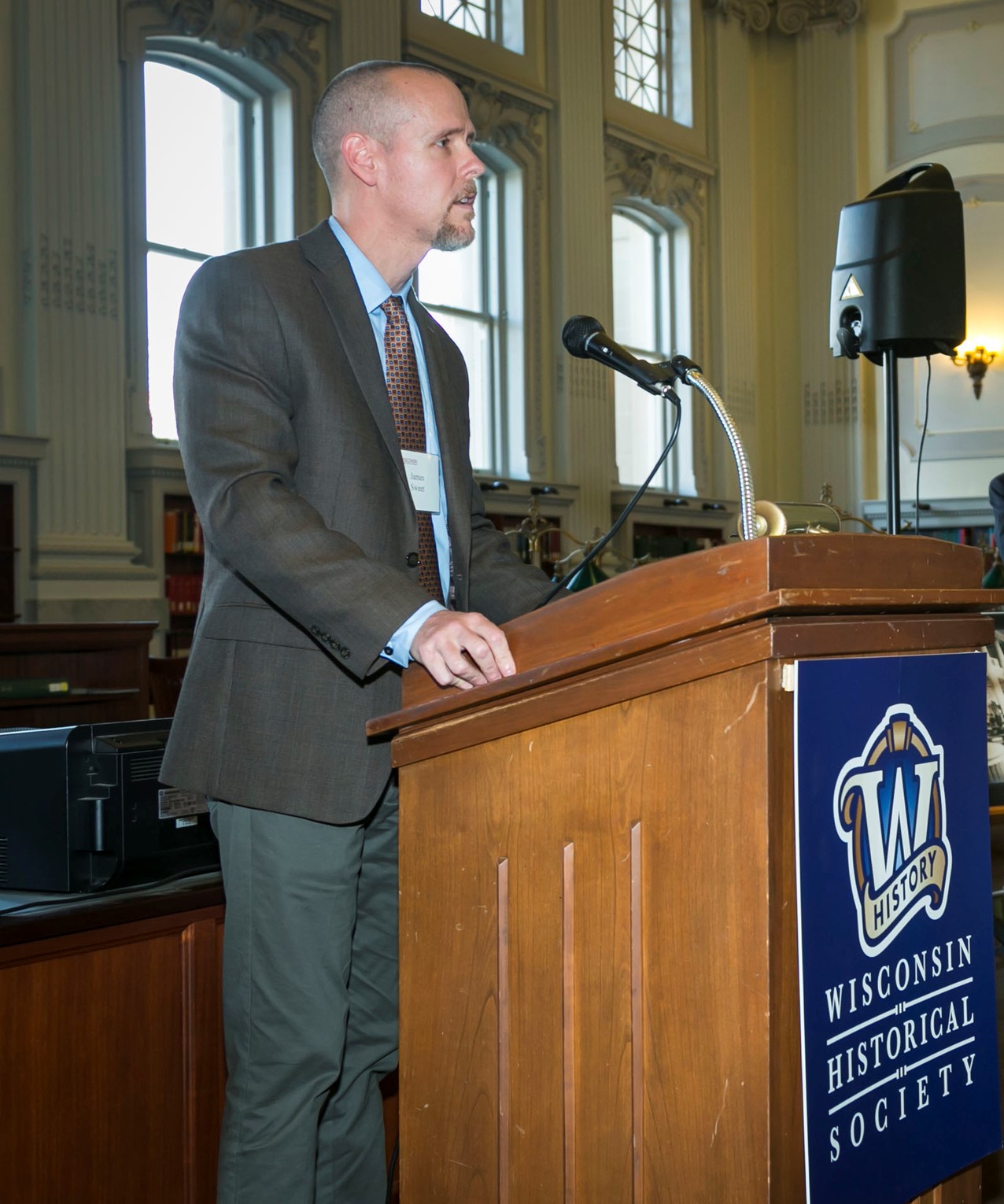 A scholar of Africa and the African diaspora, Sweet earned his BA and MA from the University of North Carolina at Chapel Hill and his PhD from the City University of New York. He is the author of two prizewinning books. Recreating Africa: Culture, Kinship, and Religion in the African-Portuguese World, 1441–1770 (Univ. of North Carolina Press, 2003) won the AHA’s Wesley-Logan Prize. His second book, Domingos Álvares, African Healing, and the Intellectual History of the Atlantic World (Univ. of North Carolina Press, 2011), won the Gilder Lehrman Center’s Frederick Douglass Book Prize and the AHA’s James A. Rawley Prize in Atlantic History. Additionally, he serves as series editor for Africa and the Diaspora: History, Politics, Culture for the University of Wisconsin Press, and he previously served on the AHA Council’s Research Division (2016–19).

Sweet is an accomplished instructor. At UW–Madison, he has won teaching awards, and students elected him to be 2017 commencement speaker. His undergraduate and graduate courses focus on the Atlantic world, comparative slavery, comparative world history, and the histories of Brazil and South Africa. In his free time, he coaches high school football and volunteers with the YMCA.

Sweet assumes the role of the president at a ceremony during the AHA annual meeting in early January. Perspectives recently spoke to Sweet about his career, his goals as AHA president, and his Netflix recommendations.

I came into the discipline through the side door. As an undergraduate at UNC in the 1980s, I majored in political science, but I was a work-study student in the Department of History. I built bookshelves for Bill Leuchtenburg and delivered mail to Nell Painter. When I graduated, my mentor Colin Palmer convinced me that I would die if I joined the army, so I opted for law school. One year of law school made me profoundly unhappy, so I quit and moved back into my mom’s house. For a couple of years, I took history courses at UNC Charlotte; worked full-time at the airport; and used my earnings to travel to Europe, the Caribbean, and South America. It was during this time that I discovered a passion for history, and Colin encouraged me to apply for graduate school. He opened the door for me, and I haven’t looked back.

What first interested you in the African diaspora and the Atlantic world?

An accumulation of life events and broader intellectual interests drew me toward these topics. My stepmother was Venezuelan and a Spanish teacher, and she stoked my interest in the Spanish-speaking world from a young age. I took courses on Latin American history and politics as an undergraduate, in addition to courses in African and African American studies. Colin Palmer was Jamaican born but forged his career in the United States as a historian of the African diaspora. His influence on me was profound. Then, just before grad school, I married a South African.

When I applied to graduate school, the African diaspora and the Atlantic world were not discrete fields as they are today. I wanted to study slave societies in 19th-century Cuba, so I was considered a Latin Americanist. I cobbled together an individual plan of study, taking everything on African and African American history I could. Annual trips to Africa to visit my wife’s family enriched my perspective on what I learned in the classroom. When I started reading in the archives for colonial Brazil, a lot of the African ritual and linguistic materials that others had overlooked made sense to me. I knew I could write a good dissertation.

Colin Palmer clearly made an indelible mark on you. Tell us about his influence on you.

When I worked in the history department, Colin at the time was department chair—the first African American chair of a major department at UNC. I sat at a table in the department office, and he would walk through and poke fun at me. One day, I was laboring over a research paper, and he just grabbed it and walked into his office with it. I waited a few minutes and then followed. He said, “You’re not as dumb as you look.” He took an interest in me—he would read my papers, and he asked me what I was interested in. He really saw me. And when I decided to attend graduate school, I returned to UNC to work with him, then followed him to CUNY.

Colin is still the primary role model for everything I do. I find playfulness really important in learning—something he reinforced. He also had an eye for the quiet student at the back of the class who has something to say. He would help pull them out of their shells. I gravitate toward those students too, especially undergraduates. I do it even more with younger kids in football coaching. He taught me that mentoring is as much emotional as it is intellectual and to make your mark where you can.

Historians across the discipline are inviting our skeptics to understand how we do what we do.

How does your scholarship influence your teaching?

I try to bring my scholarship into the classroom every opportunity I get. At the most basic level, I integrate my richest archival stories into lectures to raise questions or illustrate important conceptual points. In research courses, I assign methodological exercises that employ different kinds of sources—linguistic, artistic, material, and archival—drawn from my own research. I encourage students to think creatively about what constitutes a source and then to come up with innovative ways to interrogate those sources. Thinking about research through the prism of the classroom also facilitates my writing. If we can’t make our research comprehensible for our students, we miss out on the full potential of our work.

How do you see historians, regardless of their professional role, having a positive influence on the newest “culture war” around history curriculum?

The culture wars have been a proxy for political divisions for a long time. I came of age during Ronald Reagan’s presidency, and one of my senators was Jesse Helms. I rejected the dominant politics of my youth, but I sought to understand the anger and anxiety that generated them. The people who raised me held the same ethical values as me, yet we disagreed on some fundamental political issues. I still hold fast to the belief that people can agree to disagree on these fundamental issues, while still talking, maintaining friendships, and even loving one another. I have never viewed politics as a zero-sum game.

That said, today’s culture wars transcend the mere political. What is at stake are the foundations on which we conduct historical research. In a world where our political leaders (and others) question the veracity of the most basic scientific data, historical evidence is often rejected out of hand. Over the last five years, historians have been fighting to protect our discipline from denialists and political provocateurs. The AHA has been especially proactive in opposing attempts to censure or control historical scholarship in public schools and universities. By explaining the importance of evidence and argument, we shine light on the processes of truth seeking at the heart of our discipline. I am optimistic that historians across the discipline—teachers, museum curators, archivists, editors, and others—are embracing this challenge, inviting our skeptics to understand how we do what we do.

What goals do you have for your term as AHA president?

First, I want to help the organization continue to grow its public presence. I’m particularly interested in bridging the political divide by inviting prominent Americans—both Republican and Democrat—to engage with the AHA at its meetings, in its publications, and in its advocacy. As department chair, I presided over a board of visitors—all former undergraduate history majors, now bankers, lawyers, and CEOs, as well as educators, journalists, and human rights workers—who represented a broad spectrum of political views. What they shared was a passion for history, often kindled by their undergraduate professors, and they were some of our staunchest defenders against political attacks. They also opened their pocketbooks to support us financially. Colleagues at other public universities like UCLA and UT Austin have told me about similarly enthusiastic history boards of visitors. I believe these boards can be scaled up to help us address some of our most pressing national issues.

Second, I want to grow the AHA’s endowment. A portion of the Association’s annual budget is dependent on grant money. In fact, the salaries of several crucial staff positions rely on funds that could easily evaporate. I would like to see us fill this gap and shore up the administrative capacity of the organization. Increasingly, historians rely on the AHA to protect our intellectual interests, as well as our professional ones, and there is no stronger advocate for the future of our discipline. We need to better fund these efforts through yearly giving, bequests, and so on. Beyond the immediate membership, I also hope to generate gifts from prominent Americans interested in the kinds of critical inquiry and debate generated by historians’ work.

Finally, we ask everyone, “What can’t you get enough of?” Any books, hobbies, or other pop culture obsessions that you’re turning to right now?

I’ve always been a sucker for bad TV. During COVID, I discovered Netflix for the first time. After reading and writing all day, I looked forward to vegging out on my couch with a beer to watch shows. I binged everything from Ozark to Bridgerton to Umbrella Academy, including some truly horrible shows like Tiger King. The most recent series I watched was Squid Game. I should probably be embarrassed, but I’m not!