Core of the Matter

The Complex Roles of History Courses in General Education

In the beginning, there was the curricular core, and the core included history. My land-grant institution, founded in 1889, required History 1: Europe and History 2: The United States among classes all students took until 1915. By then “career education” had begun eating into the old core, and our current general education was born. Ever since, historians have been defending the distinct place of history in general education curricula. The importance of general education to history enrollments makes it crucial that we understand the changing general education landscape and can articulate the value of historical study for students within that framework. 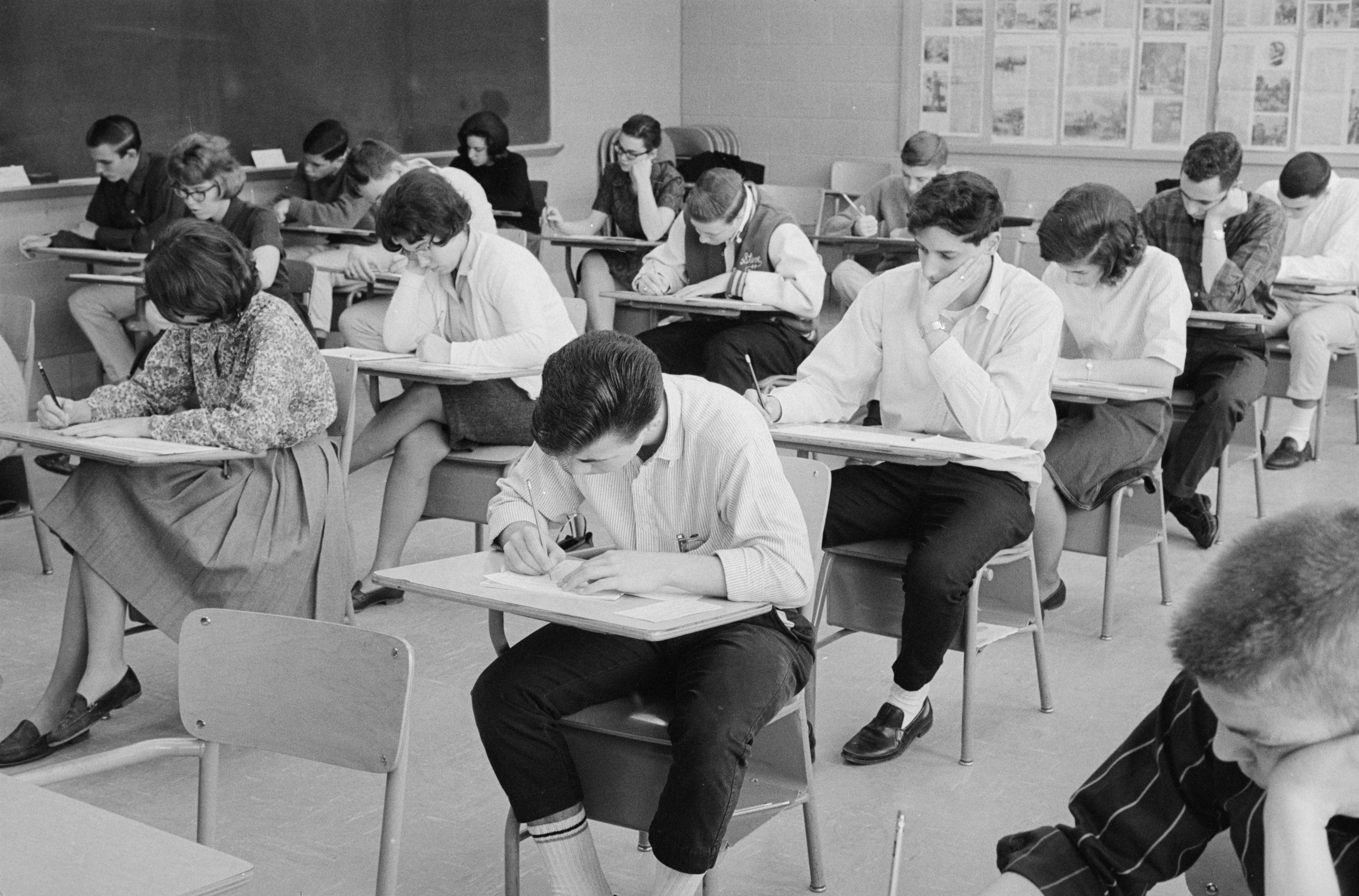 The place of history in general education has changed substantially over the course of the 20th century. Warren K. Leffler/Library of Congress

When the AHA’s Teaching Division began looking closely at the issue of declining enrollments, many historians reported a sense that changes to general education requirements were driving enrollment declines at their institutions. So when the AHA revived its undergraduate history enrollment survey in 2016, it asked respondents (usually a chair or other department administrator) whether there had been recent changes to the general education curriculum, and what place history held in any institutional requirements. Over the five years the survey has run, there have been 487 responses to the prompt “Describe briefly history’s current role in the required general education program for your institution, if any.”

The answers paint a picture of how history is used in a wide range of general education programs. Respondents include large two-year schools like Bergen Community College and Salt Lake Community College, liberal arts schools like Kenyon College, religious institutions of all sizes such as Brigham Young University and the Catholic University of America, land grants such as Texas A&M University, techs like Massachusetts Institute of Technology and Virginia Tech, elite private schools like Harvard University, and multicampus systems such as the California State University. Geographically, every region of the United States has been represented, along with a few Canadian schools.

Having worked with general education programs across the country, I used the survey to discover the place of history in general education. The departmental responses to the AHA’s questionnaire reveal history’s multiple roles in general education and history’s many services to non-majors. Unsurprisingly, history is all over the place, though there are general patterns. These patterns show us that history’s function in curricula is poorly defined. History seems to belong to all sorts of categories at once—humanities, social sciences, globalization, diversity, critical thinking, writing intensive, core subjects, noncore subjects, preparation for citizenship, something students can avoid, and more. It appears that schools use history reflexively, according to their curricular customs. There are multiple models of general education, each using history in different ways.

In the core model, the oldest form of general education, history is usually required as a distinct, didactic part of a college education. Like classical languages, history was thought to prepare students for life in the educated elite. Which field of history, of course, varies from campus to campus, but it is assumed to be foundational. In these cases, history does not have to define itself, since it is assumed that some is good for everyone. American and world histories are the main credit producers, mandated in many schools. However, many core programs allow choice between several history courses without specifying content. All histories are equal to all other histories: just take one; all are good for you.

The most common general education models use “distribution” systems. These became especially popular in the 1960s and 1970s as prescriptive curricula went out of fashion. In these, students choose from a menu of courses within breadth areas, such as “humanities” or “social sciences.” Here, history is classified equally as either a humanities discipline or a social science discipline. This division is an artifact of the old debates over history’s purpose. Does history civilize or does it predict human behavior? This cleavage in definition continues, according to local custom. For instance, in the Utah System of Higher Education’s eight schools, history is a humanities subject in four and a social science in the other four. Historians do not care, since they do what historians do no matter how their classes are categorized, but when it comes to general education enrollments, it matters deeply.

Schools use history reflexively, according to their curricular customs.

In many places, the humanities are conflated with the arts and seen as teaching self-understanding, empathy, and expression through textual analysis. This cultural literacy goal is fulfilled by history or any other equivalent discipline, such as literature. On the positive side, being in the humanities often brings higher enrollments because there are fewer humanities disciplines, but all are treated as equals—one or two generic humanities classes will give the student all the exposure to the humanities that is needed. There is seldom an institutional distinction made between various humanities disciplines.

Where it is a generic, history is just a choice among many. In distribution systems, however, history often has a niche as part of the so-called “education for citizenship,” especially in state systems. During the early Cold War, many states introduced a distinct requirement of US history and sometimes state history. This is a significant source of history enrollments in states like California, Texas, Tennessee, and Utah, but what is taught in such citizenship courses may vary a great deal. History often creates its own smorgasbord within this requirement, treating everything from the US pre- and post-Civil War, the history of a state, and the histories of particular minorities, such as Mexican American history in Texas, as equivalents when it comes to meeting the general education expectations. Some states also mandate American Institutions courses without naming which courses fulfill the mandate, so history competes with political science, economics, and others for students.

Sometimes these citizenship courses spill into another general education goal, preparing students for life in diverse communities. The AHA survey revealed that some schools are dropping American history in their general education frameworks in favor of generic diversity education that can be met by courses not offered by history departments. In many places, American history is being replaced by a range of courses that introduce cultural and global studies and diversity. The definition of diversity varies enormously, campus to campus, but the general idea is to introduce students to an understanding of the “other” and prepare them for life in plural societies.

It will help to have a clearly articulated explanation for what history does for students.

Another general education pattern has history departments participating in “threads” or “clusters” that map skills across groups of related courses that students are required to take. Overlapping goals, content, and skills, such as research and writing, create a coherent mini-core while providing students with choice. The thematic clusters often include history courses, united under titles like Humanity and Culture, Social Thought and Tradition, or Civilizations.

More complicated general education programs sort courses by student outcomes and goals rather than content or discipline. These may appear labyrinthine to outside and inside observers, requiring departments to code their courses according to complex rubrics. At one major land grant, students choose four courses from five rubrics: Historical Analysis; Knowledge, Cognition and Moral Reasoning; Literature and the Arts; and Social and Behavioral Analysis. This means that students need not take any history courses at all. Or they might take several. At another land grant, history meets the “social scientific thought” requirement, the “historical reasoning” requirement, and the “writing” requirement, but history is not required of anyone. The designations are generally earned course by course, so history per se is not assumed to do anything.

I suspect readers of Perspectives have by now found their general education experience within one or more of these models. The good news is that history is in demand for many different reasons, but why it is in demand is less certain.

As the AHA continues to think about gateway courses and history’s place in the larger curriculum, it will help to have a clearly articulated explanation for what history does for students in the rest of their studies, their future professions, and their civic lives. History deserves an essential place in the curriculum, but we need to work less from our inherited roles and more from our strengths as a discipline. The AHA’s Discipline Core is an excellent place to start. If your school is thinking of “reforming” general education, you need to be ready to articulate what history’s role in the curriculum should be.

Norm Jones is emeritus professor of history at Utah State University and an advisor to the AHA’s History Gateways initiative.