Going Where the Archives Lead

Mary Lindemann takes the presidential gavel at the AHA annual meeting in New York City this January. A historian of early modern Germany, Lindemann was the first person on her mother’s side of the family to graduate from high school and the first in her family to earn bachelor’s and graduate degrees. Since earning her PhD from the University of Cincinnati in 1980, she has taught at Carnegie Mellon University and the University of Miami, where she is currently professor of history and chair of the history department. 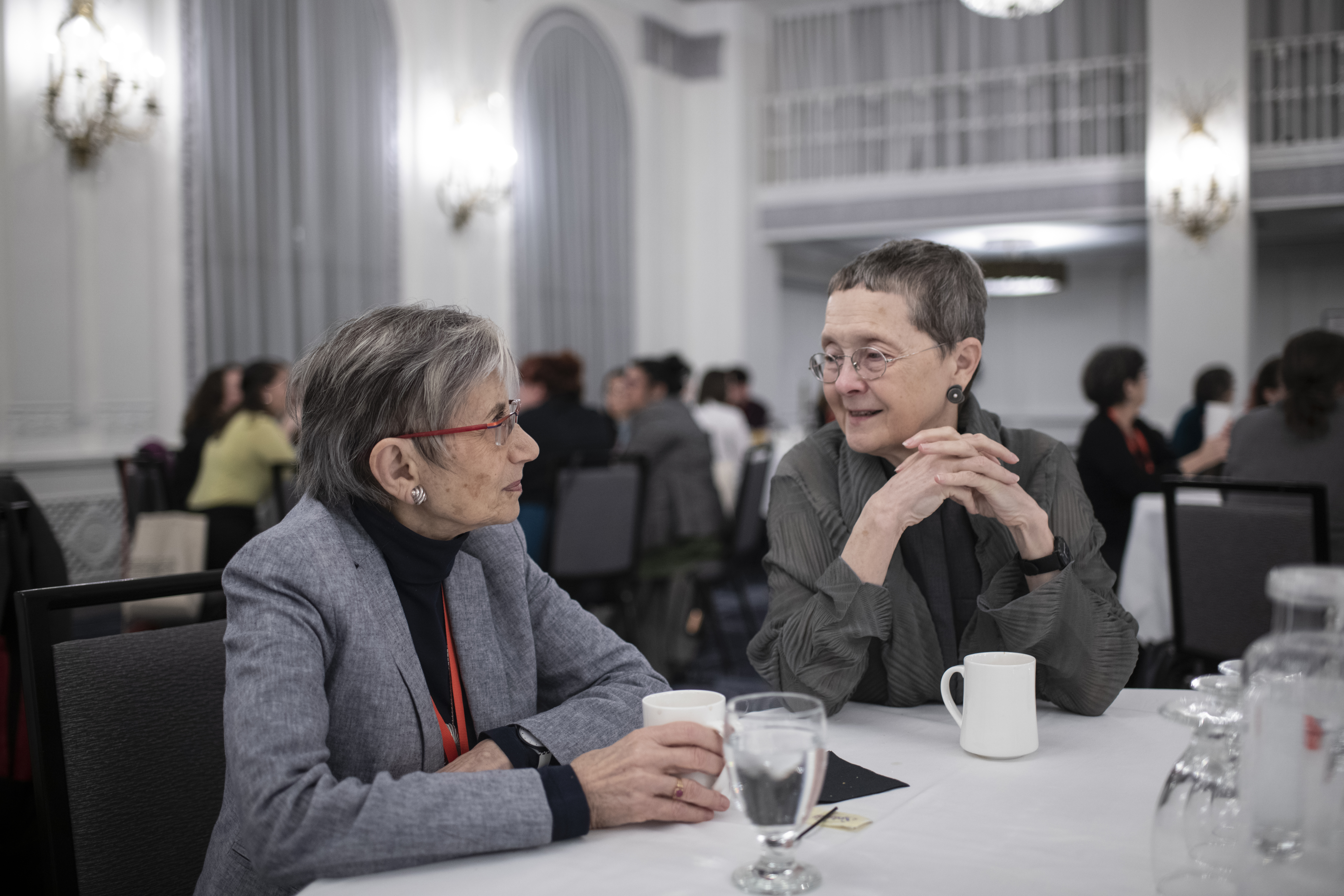 Her award-winning books on medicine, law, and politics and numerous fellowships mark her as one of the top experts in her field. Her books include Patriots and Paupers: Hamburg, 1712–1830 (1990); Health and Healing in Eighteenth-Century Germany (1996); Medicine and Society in Early Modern Europe (1999); Liaisons dangereuses: Sex, Law, and Diplomacy in the Age of Frederick the Great (2006); and The Merchant Republics: Amsterdam, Antwerp, and Hamburg, 1648–1790 (2015), along with several edited collections. She has also served as president of the German Studies Association and co-editor of Early Modern Women: An Interdisciplinary Journal.

Lindemann spoke with Perspectives in November 2019 about her career and her plans for her tenure as AHA president.

I had a good history teacher in high school, which is not the response I normally get from my students, who usually say they hated history in high school. I don’t remember specifics, but I have a very pleasant, warm memory of that class. Then at the University of Cincinnati, perhaps because I couldn’t do calculus, I tried a couple of things and did history courses as a part of distribution requirements. I had good history professors there—I went to the same place for my bachelor’s, master’s, and doctoral degrees—and one of them, the undergraduate professor I had in renaissance history, Guido Ruggiero, was still around when I was in graduate school. He stayed with me all through my graduate program. He was not my adviser, but he was the person who first made me understand what it was to be a professional historian.

What drew you to working on Germany?

People often ask me if I got interested in German history because of my German name and ancestry. After having said no for many years, I realized that there were some influences. I grew up in a very Germanic town—Cincinnati, Ohio, has a very strong German heritage, and I think now it probably did strongly influence me. The other factor was academic. I took a readings class on early modern German history with only four students, who were all very animated, and we read a lot of interesting things. The German department at Cincinnati was also excellent, and I took a German literature course with Guy Stern that was just astonishing. The combination of the German history and literature professors I had made the difference.

I got a job working in a konditorei, in a bakery behind the counter. That’s where my German improved tremendously.

Early in your career, you spent time researching in Hamburg and Wolfenbüttel, Germany. How did living abroad impact your studies and your career?

When I arrived in Germany, my language skills were just adequate. I could make myself understood. But when I ran out of money from my research stipend, I got a job working in a konditorei, in a bakery behind the counter. That’s where my German improved tremendously, because customers don’t care if you understand. They’re ordering their chocolate cake, and you have to learn how to respond and respond quickly. I also taught English to Russians in Hamburg, which meant that I was able to stay for two years and continue to improve my German. Working meant that it took me longer to do my research, but it was worth it.

Spending so much time living in Germany was absolutely invaluable. Working these jobs gave me a vision of the world that most academics don’t get in another country, and it gave me a better feel for Germany and the Germans. I think this is a critical experience for anyone who wants to do research outside of the United States—or, for that matter, in a different part of the US. I bet Idaho would have been just as different to me from Ohio as Germany, except for the language. Those two years in Hamburg and then another two on a postdoc transformed my life; that sounds trite, but it is true.

Your books reflect diverse interests—medicine, trade, politics, war. What drew you to these topics?

My first book, Patriots and Paupers, was based on my dissertation and included medical relief as an essential part of poor relief. I had taken graduate courses in the history of medicine, and I thought, “Hmm, this is interesting. Maybe I should pursue the poor-relief angle in a different way.” I looked around Germany for postdoctoral fellowships, and I received one at the Herzog August Library in Wolfenbüttel to do research on medicine and medical care, which led to my second book, Health and Healing in Eighteenth-Century Germany.

My next book involved a cause célèbre in Hamburg that I originally encountered during my dissertation research. Through pure luck, I ordered up the papers for a case that appeared interesting, and a foot-high file was soon plopped on my desk. And that research, much later, became Liaisons dangereuses. As I turned to a new comparative project on urban crime, I realized I wasn’t looking at crime so much as merchant republics, which resulted in my fourth book.

You can see how it’s all connected. I don’t define myself as a political historian or a medical historian, or as any particular “type” of historian at all. I just go where my archival nose leads me at any particular moment. Right now, I’m doing something with an environmental aspect. After I finished The Merchant Republics, I wanted to do another big German archival project. I became focused on how Brandenburg-Prussia rebuilt after the Thirty Years War, and the documents led me to look at not only political and social redevelopment, but also landscape redevelopment; that second aspect is now taking over a lot of the current project.

Who have been your mentors over your career?

At Cincinnati, I have already mentioned Guy Stern and Guido Ruggiero. I met two people in Wolfenbüttel who had a tremendous influence on me through their sheer generosity. I met Natalie Zemon Davis at a conference there. We sat and talked during the conference, and later on, she wrote letters for me—it was very nice and gave me a good idea of what mentoring an early career scholar was all about. Michael MacDonald did virtually the same thing after we met there.

There are others who have been extraordinarily kind and helpful, often people who reviewed my manuscripts for publishers. They identified themselves at the time or later on, and people like Mack Walker, Geoff Eley, Jo Whaley, and Richard Evans were extremely helpful. There are other friends I know I can trust to say, “Lindemann, this is really not good work. Do it again,” and vice versa. It’s become a wide circle.

And now that I’m something of an ancient historian myself (though I don’t do Greece or Rome!), I’ve become a mentor for others. And though it’s not the direction we normally think mentoring goes, by some strange alchemy, they’ve become mentors for me too. I can turn to them for information and assistance. Graduate students ask how they can repay us as mentors, and they can’t—but they can pay it forward.

Graduate students ask how they can repay us as mentors, and they can’t—but they can pay it forward.

Do you remember attending your first AHA annual meeting?

At Cincinnati, we had a job search, and I was a graduate student member of the committee, and they paid to fly us to the annual meeting in Atlanta in 1975. The book exhibit sent me into a tizzy of greed and also generated considerable fear—how many books are there to read? I remember my early conferences as alienating experiences. I found it very hard to talk to people and network. But I gradually came around to the knowledge that the best way to develop those networks is to sit at a panel and talk to people afterward. I remember purposely going to a lot of panels at my first AHA on subjects about which I knew virtually nothing. And that was fun!

What goals do you have for your year as president?

Not to embarrass myself too much! Seriously, I want to feel that I’ve contributed something to the AHA—not only in terms of professionalization and administration, but also intellectually. I’m not sure how I’ll achieve that, perhaps through setting up panels at the 2021 annual meeting. I’d like to mix and match scholars with big reputations with others possessing great expertise but who have never had a platform to share it.

I also hope I can make some contribution in helping the AHA and the profession rethink the academic job market. Right now, we all know the AHA no longer sponsors interviews, but as John McNeill wrote recently, the landscape has become ever less easy to negotiate. For all the good and bad, the annual meeting was a temporal anchor for the market. Now I have students being offered jobs in October and wishing they had the opportunity to consider other jobs before accepting. And that can be tremendously unfair. They should have a chance to make an informed choice. My sympathies are with the job candidates, and I think we do the profession, the departments, and ourselves a disservice by trying to get candidates to make quick decisions they and we may regret. With graduate applications, we agree now that prospective students don’t need to make a decision before April 15. Is there some way to do that with job offers? You’re never going to lasso all of them, but in the interest of fairness, we can do better.