"A Great Tradition That Was Not Ours"

Mo Moulton (Univ. of Birmingham) picked up Dorothy L. Sayers’s mystery novel Gaudy Night “on a whim,” they told Perspectives. “I found myself taken with this portrait she created in this ostensibly cozy mystery novel of a women’s college in the . . . late 1920s, early 1930s,” and how it portrayed a “powerful community of fully realized, dimensional female scholars.” The novel is set in the fictional Oxford college of Shrewsbury, drawing on Sayers’s own experience at the real women’s college of Somerville at Oxford.

The Mutual Admiration Society would have spent time at the Somerville College Library, built in 1903; it was the first library for women at the University of Oxford. Wikimedia Commons/Aivin Gast/CC BY-SA 4.0

Moulton found themselves fascinated by the networks of female academic friendships at the heart of the novel, and became curious about the real Somerville College. “At first I thought it was going to be a fun little reading expedition,” they said. “I’d read a biography of Dorothy L. Sayers to find out about these women and then move on, and instead it raised nagging questions—who were these women? And why didn’t the biographies of Dorothy L. Sayers mention them?”

The more Moulton investigated the tight-knit group of friends Dorothy L. Sayers made at Somerville College, the more they seemed like an ideal sample group for a study of the first female graduates of Oxford University. In their first year at Oxford, Sayers and her friends established a literary workshopping group called the Mutual Admiration Society (MAS for short), and kept in touch with the other members throughout the rest of their lives, creating an accessible archive of letters and shared creative work. This name, as Moulton writes in The Mutual Admiration Society: How Dorothy L. Sayers and Her Oxford Circle Remade the World for Women (Basic Books, 2019), “both captures the spirit of the group and misrepresents it.” The members did collaborate on projects and support each other’s literary endeavors, but they were also often at odds with each other. But at the heart of the group was the wish to offer and receive serious criticism on their work. Moulton focuses on four main members of this group:

These four women began their studies at Somerville College in 1912 and entered the workforce during World War I. However, they didn’t receive their diplomas until 1920. Though many women-only colleges in the UK had begun granting degrees to graduates in the 19th century, says Moulton, female students at Oxford colleges “got pieces of paper that said so-and-so has completed the examinations, and the residence requirements, and all the requirements that would entitle her to a degree. They just had certificates that proved that they had done all of the work.” This meant that they could not call themselves Oxford graduates. They were merely students of Somerville College.

The tight-knit group of friends Dorothy L. Sayers made at Somerville College seemed like an ideal sample group for a study of the first female graduates of Oxford University.

This distinction left lasting impressions on the Mutual Admiration Society. In 1934, at a speech at Somerville, Sayers characterized her time at Oxford as “the simulacrum of a great tradition that was not ours.” She and her fellow female students had hoped “that by assiduous make-believe we might somehow end by making the belief come true.” For five years after “graduation,” they existed in this state of limbo, as former attendees of Oxford without being actual graduates.

Then, in 1919, British Parliament passed the Sex Disqualification Removal Act, allowing the members of the Mutual Admiration Society and many other female students of Oxford colleges to receive the diplomas they’d longed for. This act, according to the copy in the National Archives, outlawed discrimination on the basis of sex in “admission to any incorporated society” as well as “holding any civil or judicial office,” or “assuming or carrying on any civil profession or vocation.” “That legislation,” Moulton told Perspectives, “became the reason that people at Oxford University used to justify making the switch.” (This did not apply to female students at Cambridge University; women did not receive Cambridge degrees until 1947.) In the same 1934 speech at Somerville, Sayers recalled receiving her degree as “the queerest ceremony of degree-taking that can ever have been held in any university.” A vast number of female former students of Oxford, of all ages and graduation years, returned to pay their fees and received their degrees, academic caps, gowns, and hoods, and the right “to be addressed for the first—and for many of us the last—time by the title Domina.”

The titles bestowed on this new generation of Oxford graduates seem to have meant a great deal to Sayers. In Gaudy Night, her heroine Harriet Vane has a master of arts degree from the fictional Shrewsbury College, and her love interest Lord Peter Wimsey proposes by asking, “Placetne, magistra?” or “Does it please you, mistress?” Magistra was the appropriate Latin title for a female master of arts.

Once these female Oxford graduates received their degrees and were released into the wilds of 1920s Britain, society didn’t know what to do with them or how to integrate them. As Moulton phrases it in the book, the members of the MAS were “on the front lines of the struggle for independence . . . they faced a job market that actively favored men returning from the war,” and they had two paths open to them: teaching or marriage. “Nearly every MAS member taught secondary school at some point,” Moulton added. The only exception was Charis Frankenburg (née Barnett), who instead became a nurse in France thanks to the outbreak of World War I. 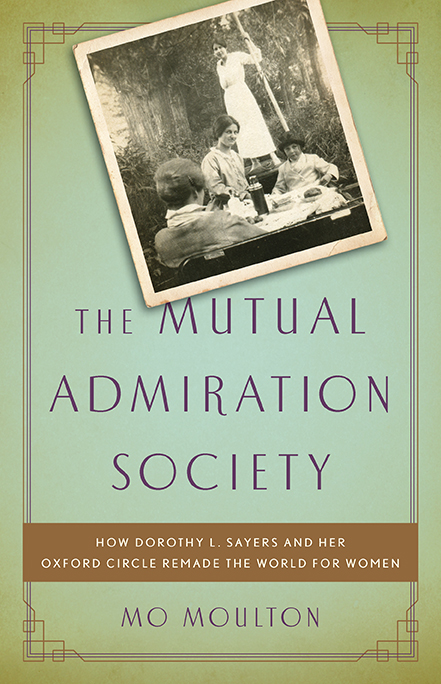 The members of MAS struggled to find jobs, independent lodgings, and markets for their literary work. And they struggled too with the expectation that they should marry. Nurse Charis went on dates with men she characterized as “on leave from the front anxious for companions for dinners and theatres,” and when she did marry, she approached motherhood with the same medical eye as she did her war work. She ended up writing Common Sense in the Nursery and several other advice manuals on childhood development, later translating this into work in a birth-control clinic in Manchester.

Sayers, on the other hand, had a more fraught relationship with marriage and motherhood. She had an affair with a married man that resulted in a then-scandalous pregnancy out of wedlock. A cousin raised the child, and Sayers kept it such a secret that it is unclear if even the members of MAS knew about it at the time.

Two members of the group never married. Dorothea Rowe was an educator “in an era,” as Moulton writes, “when teachers were usually barred from marriage.” Whether out of professional obligation or personal inclination, Rowe stayed single.

So did Muriel St. Clare Byrne . . . albeit for other reasons. Moulton discovered Byrne had kept “letters from her lifelong partner, Marjorie Barber, and also another lover who she was with in the 1930s and 1940s, Susan Collis.” The letters from Susan had been gathered together in a large envelope marked, “To be burned unread.” Moulton says that “throughout the letters themselves, there are discussions of their relationships, their feelings.” “There’s this kind of tango they do around writing stuff that’s explicitly about a romantic relationship between two women, and it’s clear that they feel pressure to be discreet and keep this secret. It’s also clear that these letters meant a lot to both of them.” The letters don’t match the postmarks of the envelopes Moulton found them in, which suggests to Moulton that these letters were “an archive of love letters” that Muriel reread throughout the course of her life.

There was a tension for all members of the MAS over reconciling high art and mass culture.

There was likewise a tension, for all members of the MAS, over reconciling high art and mass culture. As Moulton told Perspectives, “All of them, in different ways, were engaged in the project of trying to write for a broad audience, trying to mix popular genres like detective fiction and advice manuals with serious ideas.” In her amateur theater, Rowe produced one of the first modern-dress productions of Richard Brinsley Sheridan’s The School for Scandal. Frankenburg’s advice manuals, though engaging with serious academic debates on childhood psychology and development, were meant for trade presses and working-class readers. Byrne wrote general nonfiction books on the Tudor era, as well as producing a serious scholarly edition of the Lisle papers. Sayers wrote detective novels, but also translated Dante. All four MAS members were determined, as Moulton writes, to bring “the critical training they had received at Somerville” to their creative and intellectual endeavors, and to bring the difficult intellectual concepts they wrestled with to “the ordinary person through clear writing and popular culture.”

Moulton, inspired by her subjects, decided to write their book for a trade press instead of an academic press. “It felt important to me,” they said, “to carry that idea forward into my actual writing of the book as well.” To those academics likewise hoping to write for a trade press, Moulton’s top piece of advice is to start small. They began with a series of pieces for the online publication The Toast on the historical context of the TV show Downton Abbey. Pop culture—whether period dramas or detective stories—can offer a way into more complex understandings of history for the ordinary person. The MAS, as Moulton characterizes it, insisted that “the biggest ideas were property of every human being.” These women’s own difficulties in being recognized for the scholars they were made them determined “to put the tools of learning, which they had won for themselves with such difficulty at Somerville, into everyone’s hands.”