New Perspectives on Histories of the Slave Trade

Intertwined. Overlapping. Interconnected. The complicated entanglement of slave trading, geographies, and ethnicities was the focus of the Thursday night plenary, “New Perspectives on Histories of the Slave Trade,” at the 2018 AHA annual meeting. In papers ranging in focus from trade routes in the western Indian Ocean to forced treks across Brazil’s interior to mangrove slave trading ports, the panelists revealed how histories of slave trading offer opportunities to rethink the construction of race and ethnicity from a global perspective, the broader theme of this year’s meeting. 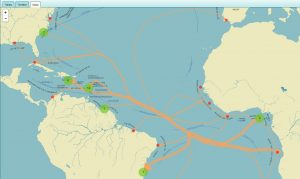 A map on Voyages shows estimates of enslaved Africans transported across the Atlantic between 1501 and 1866.

Understanding the complexity of the slave trade—or, more accurately, as became clear in the plenary, slave trades—requires responding to the panelists’ general call to look beyond the Atlantic Crossing. The American public’s understanding of the slave trade is largely situated in the horrors of the Middle Passage and New World slavery. Indeed, as Gregory E. O’Malley (Univ. of California, Santa Cruz) pointed out, this is the typical narrative recounted in textbooks. But the Atlantic Crossing is just one segment of larger, overlapping circuits of slave trading routes that shaped identities and experiences within the African diaspora and the African continent.

Geography, and the ethnicities and trade practices that overlay it, is central to these emerging perspectives on histories of the slave trade. Asking the audience to shift away from a focus on Atlantic slavery to consider the Indian Ocean, Janet Ewald (Duke Univ,) reflected on a map from Voyages: The Trans Atlantic Slave Trade Database offering an overview of the slave trade from 1500–1900. She noted that, while useful, the map is a simplified view of slave trading interactions. The northern and southern circuits of the trade were incredibly entangled and shifted over time. Considering not only the port cities, but also the hinterlands, as areas of interaction, she argued, reveals the interconnectedness of trade routes involving ivory, gold, and people, and the impact of industrial capitalism on political economies, which “gave the slave trade its dynamism.”

O’Malley, too, called for a reconsideration of geography in the contexts of the Americas. Approaching captives’ experiences as “multi-staged journeys,” he argued, provides new perspective on the pervasiveness of the slave system, as well as an understanding of the much longer, dangerous journeys of captives. The intra-American trade, for example, was even deadlier than the Middle Passage. Captives were forced to walk and sail staggering distances—thousands of miles—from Africa’s interior to the coast; from ports along the eastern coast of South America and into the Andes Mountains; from the Caribbean islands to Virginia.

David Wheat (Michigan State Univ.), too, highlighted the importance of shifting geographical perspectives. Long before the rise of ports like Cartagena and Buenos Aires, he argued, 16th-century slaving networks based in the Canary Islands, Cape Verde Islands, and São Tomé converged in Sierra Leone and then fanned outwards. These overlapping slaving networks, he argued, “evolved, fed into, and sometimes competed with one another.” These networks not only linked Iberian colonies and established new Iberian settlements; they also provide a critical entry point to understanding the complexities of the “Zape” diaspora in the context of the Upper Guinea coast.

Emma Christopher (Monash Univ. & Unshackled Media) also explored geography’s effect on the experience of captives by revealing shifts in slave trading following the trade’s illegalization in 1808. Old, coastal slave ports were replaced by new operations hidden away from the coastline among mangrove trees—a practice that had significant consequences for how enslaved people were grouped together and sold to plantations in the Americas. More microstudies of the western coast of Africa, she suggested, would help us “figure out much more about the grouping of ethnicities and self-identities and how those shifted in the Americas as a result of new business practices.”

Dale Tomich’s (Binghamton Univ.) paper, too, embraced a microstudy (of Jesuit António Vieira) to understand how the nexus of race and slavery was continually remade across time and space. Focusing on the dynamics of racial formation in the Portuguese Atlantic, Tomich argued that religious thought provided a rationale for Portugal’s systematic enslavement of Africans. It “formed the fundamental of the political, social, and ideological culture of control that secured domination over enslaved Africans and legitimated the institution and brutal practices of the slave trade and slavery.”

The broader knowledge to be gained from such microstudies of particular locales was made clear by each panelist. Yet their presentations raise the question of how to undertake such research. Highlighting some of their research tools and methods, the panelists spoke about using the Transatlantic Slave Trade Database, reading documents in conversation with oral traditions, and working collaboratively to transcribe and translate documents written in multiple languages.

Scholarly collaboration will indeed be central to historians’ continued efforts to probe the complexities and interconnectedness of the slave trade, its consequences and its overlapping geographies. In efforts to gain new perspectives on old questions about “roots and routes,” scholars must consider the intra-American, intra-African, and transnational slave trades within the same frame.

Sarah Jones Weicksel is a historian of 19th-century United States. She is the author of several articles and is currently at work on a book manuscript entitled, “The Fabric of War: Clothing, Culture and Violence in the American Civil War Era.” She earned her PhD in history from the University of Chicago, an MA in American material culture from the Winterthur Program at the University of Delaware, and a BA in history from Yale University.