Inside Higher Ed: College-in-Prison Programs Flourish, but for How Long? 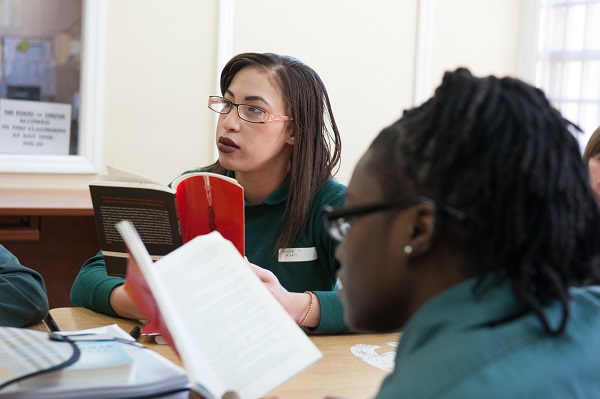 The very first credit-bearing course toward a bachelor’s degree that Tyrone Harvey Muhammad took—Islamic Architecture—ignited a new passion. “It started my love for history,” he says. But Muhammad wasn’t a typical undergraduate; he was incarcerated at the Danville Correctional Center in Danville, Illinois, and the course was offered through a college-in-prison program called the Education Justice Project (EJP).

Muhammad had taken credits toward an associate degree at the prison but quickly exhausted all his educational options. He took general education courses and received certifications in horticulture, cosmetology, and substance abuse education, among others. “After I completed just about everything I could,” he says, “they told me that I couldn’t take any more classes.” So when the EJP came along in 2006, he was one of the first to enroll.

Muhammad is one among many students who have earned transfer credits, or even bachelor’s degrees, while incarcerated. The Bard Prison Initiative (BPI), for example, one of the most successful and well-known college-in-prison programs, has awarded nearly 450 Bard College degrees since it began in 1999. Another program, the Hudson Link for Higher Education in Prison in New York State, has awarded over 500 college degrees in less than 20 years. As BPI’s associate director of national programs, Jessica Neptune, says, there is tremendous interest today in teaching in prisons and in ensuring that courses inside are credit-bearing. Historians have been at the forefront of initiating, teaching in, and preserving these programs. But despite success stories and enthusiasm from students and teachers alike, many college-in-prison programs today are on shaky ground. Concerns about funding, as well as renewed focus on “law and order” by some of the nation’s top officials, have put many programs on the defensive.

The idea of providing education to incarcerated people is as old as the nation itself, writes Ellen Lagemann, a scholar of the history of education and a former dean at Harvard, in her book Liberating Minds: The Case for College in Prison (2016). The first “penitentiary house” in the United States, the Walnut Street jail in Philadelphia, offered “instruction in morals and religion through Bible reading,” and its model was “quickly copied in other states,” she writes. In the early to mid-20th century, prison reformers succeeded in extending education to the incarcerated, but students often resented these programs for being mandatory. In 1965, the Higher Education Act made incarcerated people eligible for Pell grants, but as Neptune explains, the 1971 Attica uprising was “the turning point in gaining concessions around education” in prison. Hundreds of college-in-prison programs subsequently emerged and flourished across the country. In some states, like New York, nearly every prison had a college program by the 1990s.

In 1994, however, President Bill Clinton signed an omnibus crime bill, making those incarcerated in state and federal prisons ineligible for Pell grants. States followed by further blocking access to funds through regional programs. The sudden withdrawal of public funding proved a death knell for college-in-prison programs around the country; with ordinary citizens struggling to pay for college, the case for college-in-prison simply could not pass political muster. By 2005, according to American Public Media, “just 12 college programs, in 12 prisons, remained.”

Yet people in prison and on the outside started taking matters into their own hands. In 1998, for example, a group of incarcerated men at Sing Sing Correctional Facility in Ossining, New York, set out to create a college program after theirs shut down due to lack of public funding. They wrote to incarcerated women at the nearby Bedford Hills Correctional Facility, who had, with local volunteers, set up a degree-granting program involving 13 area colleges. The women wrote back with a playbook, and eventually, with the help of local religious and academic volunteers, Sing Sing’s men founded Hudson Link. Today, the organization enrolls 588 students and operates in six correctional facilities. Its executive director, Sean Pica, was a member of its first graduating class, and over 50 percent of the program’s staff now consists of formerly incarcerated men and women.

Around the same time, Max Kenner, a history major at Bard College, organized fellow student volunteers to offer tutoring in local prisons. By 2001, largely due to the efforts of Kenner and other Bard students, tutoring had become a fully accredited college program, and by 2005, Bard had awarded its first degrees to incarcerated students. The initiative now leads a consortium of about a dozen colleges throughout the country focused on teaching liberal arts in prison.

Several other college-in-prison programs were initiated by humanists, including historians. Rebecca Ginsburg, co-founder of the EJP at the University of Illinois at Urbana-Champaign, says that this might be because faculty in humanities disciplines often show significant interest in teaching in or about prison. After meeting at a new faculty orientation at the University of Mississippi, Otis Pickett (a historian) and Patrick Alexander (an English professor) started the Prison to College Pipeline program at the Mississippi State Penitentiary at Parchman. (Pickett is now at Mississippi College.) Margaret Garb, a historian at Washington University in St. Louis, had followed the work of BPI and eventually co-founded the Washington University Prison Education Program. In each instance, the founders were interested in doing something about the problem of mass incarceration and looked for institutional resources to help.

But teaching in prison comes with challenges. Stephanie Rolph (Millsaps Coll.), who teaches history at the Central Mississippi Correctional Facility for women as part of the Prison to College Pipeline, explains that at prisons, teachers must abide by stringent rules. Often, teachers can’t carry big bags, cellphones, or electronic devices; there is usually no access to audio-visual equipment; and prison guards usually review all material for content when it enters or leaves the prison. Students might not have access to computers, the Internet, or sometimes even books.

History instruction, which necessitates research and the evaluation of sources, is more difficult than might be expected. Lila McDowell, development director of Hudson Link, cautions those interested in college-in-prison programs to think about what it means to teach incarcerated students to evaluate sources when most don’t even have access to Google. The BPI is able to make the college’s library catalog and JSTOR available on prison servers, but programs with fewer resources often rely on low-tech scanning and printing of primary and secondary source materials.

Historians have been at the forefront of initiating, teaching in, and preserving these programs.

High-quality research from inside the system is indeed possible. While she was still incarcerated, Michelle Jones wrote a 2015 Perspectives article describing the work of the Indiana Women’s Prison History Project. Filtering their requests through undergraduate and graduate students on the outside, the incarcerated women accessed sources from the Indianapolis Public Library and the Indiana State Archives to produce original scholarship. Jones, who was released from prison earlier this year, is now a PhD student in New York University’s American studies program. (Kelsey Kauffman, volunteer director of the Indiana program, is this year’s AHA Nancy Lyman Roelker Mentorship Award winner.)

Despite challenges, incarcerated students earn high praise from instructors. Most programs require students to have GEDs or high school diplomas, and to be within a few years of release. “The students are some of the best I’ve ever had,” says Rolph. And they bring experiences to the classroom that are often absent in a university setting. She recalls a particular session in which students read Jubilee, a 1966 novel by Mississippi author Margaret Walker chronicling the life of a mixed-race woman from enslavement to freedom. “I’d just sort of prepared to do my regular spiel on Reconstruction and Redemption,” says Rolph, but the students started making connections between their lives and the novel. “They became really animated and started relaying a lot of specific experiences they’d had with prison administrators and the general lack of respect that they confront on a daily basis, and the lack of humanity that is extended to them.” The students, Rolph said, empathized with the struggles of the novel’s protagonist.

“The headiest day in the past 20 years” for anyone working in the field, says Ginsburg, was the announcement of Second Chance Pell. “Now no one knows what’s going to happen.” Many college-in-prison programs that were operating before the announcement of Second Chance Pell did not apply for the grants and continue to rely on private and university funds. The EJP recently received a $1 million grant from the Mellon Foundation; Hudson Link, which began as a response to losing Pell in the first place, relies only on private funding to support its $1.5 million budget; and BPI ran exclusively on private funds until very recently, when it was awarded grants from the Manhattan District Attorney's office. Both the Washington University Prison Education Program and the Prison to College Pipeline at the University of Mississippi rely exclusively on support from their universities and regional humanities councils to continue the work they do. These programs are unlikely to be affected, but Ginsburg believes that those started as a result of the Pell grants—as many as 40 percent of the recipients—are likely to shut down if funding isn’t renewed.

Besides funding and the issues surrounding instruction, college-in-prison programs face other challenges. Logistical and administrative issues often arise when dealing with correctional facilities, and there’s the question of changing the public’s attitude toward those who are incarcerated. Notions about inherent criminality are still widespread and, as Rolph explains, there is a lot of stigma attached, especially to those who have committed violent crimes. As McDowell says, incarcerated people are not a “popular service demographic.”

In an age when college is increasingly unaffordable, spending money on college-in-prison programs is still unpopular. As Muhammad says, work needs to be done to change societal attitudes toward the incarcerated. With help and assistance, the formerly incarcerated can become active, contributing members of their communities, he says. The prison system in the United States is broken, he adds. “Maybe it’s time to do something different. And programs like EJP are models to do something different.”

Kritika Agarwal is associate editor, publications, at the AHA. She tweets @kritikaldesi.