Changing the Narrative: “The State and Future of the Humanities in the United States”

“Are the humanities in crisis?” For the past decade, this question, and answers to it, has been posed in numerous articles and opinion pieces nationwide. Underlying it is an unspoken lament for a former, halcyon state of humanities education and research. “The State and Future of the Humanities in the United States”—a plenary session at the 2018 AHA annual meeting—however, looked decidedly toward the future: a future that certainly draws upon lessons from the past, but one that must be prepared to tackle and embrace different approaches to education, professions, and the place of the humanities in public life. The plenary featured William Adams, former chair of the National Endowment for the Humanities, and Earl Lewis, president of the Andrew W. Mellon Foundation, with Claire Potter (The New School) moderating the conversation. 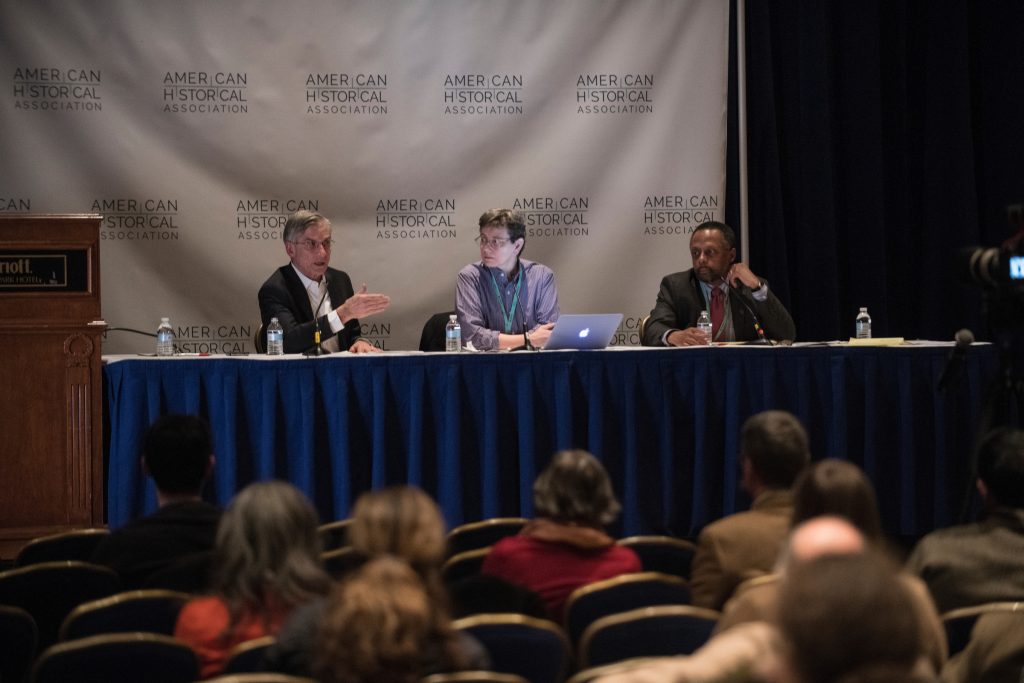 A plenary session at the 2018 AHA Annual Meeting on “The State and Future of the Humanities in the United States,” featured William Adams, former chair of the NEH, Earl Lewis, the president of the Mellon Foundation, and Claire Potter of The New School as moderator. Marc Monaghan

Potter began the session by asking Lewis and Adams to reflect on the contemporary university’s role in promoting a new vision for academic work. “What forms of evolution have we seen and what limits to evolution are we encountering in the academy?” she asked. The pace of change when it comes to graduate education in the humanities, according to the panelists, has been glacial. Adams noted that universities have made progress, but that “those steps have been modest.” The slow progress is partly due to perceptions of what “success” entails and partly due to uncertainty within departments regarding how to train graduate students differently and how to reimagine graduate education. In some cases, the panelists noted, more than uncertainty, there is resistance to change.

For decades, graduate students have been trained in highly specialized fields and expected to pursue tenure-track research positions. Indeed, Lewis acknowledged that the Mellon Foundation had previously focused on evaluating its programs’ success by determining whether or not students entered the professoriate. We need a different way to measure success, Lewis argued, and not simply because the number of tenure-track positions continues to decline. Rather, as the panelists suggested, humanities PhDs flourish in all kinds of professional contexts and their training as humanists is often central to that success. How, then, Potter pressed, do we create an atmosphere in which people know that getting a PhD and working outside academia is “an excellent use of that PhD—and of one’s life?”

We must change the narrative and create new opportunities, starting with the way we mentor students at the undergraduate level, the panelists suggested. As Adams put it, “We need to develop the language, the stories, and the success scenarios” that are both anecdotal and backed by statistics. Yet the panelists cautioned that compelling, powerful narratives about the relevance of humanities education must be supplemented with a strong message to funders and politicians that what we do cannot solely be measured in terms of economic worth. Cultivating that narrative is particularly important—and challenging—at a moment when the undergraduate degree, as Lewis suggested, is viewed as a consumer experience that will ensure “a certain lifestyle and mobility later on.” Adams explained, “We have to do better than talk about the workplace consequences of a liberal education.” Indeed, Lewis argued that the ability to imagine oneself “as a knowledge producer is critical to sustaining the democratic project that is America.”

Rethinking how we measure success also has implications for the tenure process. As modes of scholarly communication change and scholars are challenged to work in interdisciplinary teams, how should we evaluate tenure? Do we continue to focus on monographs? Or could tenure be based on articles, blogs, or other forms of scholarly work? Lewis emphasized that those in the academy must grapple with a critical question: “Are we comfortable abandoning some of the hierarchies of privilege and power that have governed us for the last 100 years?” These kinds of questions must be tackled, he noted, before change can occur.

Despite the pall that frequently hangs over discussions about the future of the humanities, the panelists offered encouragement: the humanities have continued to thrive in academic, social, and civic life in America. They pointed the audience to the Humanities Indicators project of the American Academy of Arts and Sciences, which seeks to “provide a nonpartisan, objective picture of how the humanities are faring in the United States today.” Studies conducted by the project, they suggested, will be useful in forging a path forward.

The humanities are relevant. What we face, however, is the challenge of compellingly articulating and demonstrating that relevance to a broader range of publics; to insisting on the importance of a broad education for the benefit of public life. But the question remains: how? Potter, Adams, and Lewis pointed to a series of potential answers: collaborating across disciplines, encouraging scholars to engage in a national research agenda, rethinking what scholarly communication looks like, reassessing the tenure process, and redesigning curricula at both the undergraduate and graduate levels. Despite such solutions, there was a sense that we are continuing to speak in generalized terms. Change can only materialize through a combination of developing specific solutions and breaking down resistance within academe. Indeed, the question—and challenge—voiced during the question-and-answer period by Julieanna Richardson, founder of The HistoryMakers, bears considering: “What would it take for those of us in the humanities to have a large, bold vision” of the future?