Why Is William Bradford Smiling?

Like so much about “colonial America,” the importance attached to the Pilgrims at Thanksgiving is properly located in the 19th century. Abraham Lincoln only declared the last Thursday of November a national holiday in 1863, though there had been scattered Thanksgiving days in North America before this, including the approximation at Plymouth, when the Pilgrims hosted their Wampanoag neighbors for a harvest feast in 1621. “Thanksgiving” as we know it came about in large measure due to the tireless advocacy of 19th-century author, editor, and New Englander Sarah Josepha Hale, who in 1837 began to write about the importance of a second national holiday (July 4 being the first). In combination with a rising generation of New England historians and antiquarians, these regional partisans attached the history of a small band of religious radicals to an ideal of American national origins and celebration. 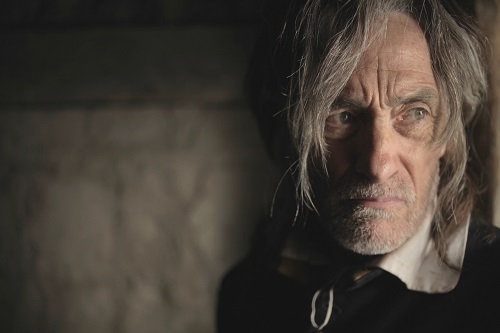 Despite this hardly hidden history, we are annually reminded to unlearn the Pilgrim mythology. On cue arrives The Pilgrims from Ric Burns, which premiered Thanksgiving week on PBS’s American Experience. The film’s promotional materials promise that it will “tell the true story of the Pilgrims, a small group of religious radicals whose determination to establish a separatist religious community planted the seeds for America’s founding.” Burns relies heavily on two recent popular histories, Nathaniel Philbrick’s Mayflower (2007) and Nick Bunker’s Make Haste from Babylon (2011). This is “a story universally familiar in broad outline, but almost entirely unfamiliar to a general audience in its rich and compelling historical actuality.”

There is an obvious ambivalence at the heart of this film. Burns wants to expose the reality of the Pilgrims’ experience, which is decidedly not the American origin story, even while he capitalizes on its outsize place in American history. Jill Lepore of Harvard University gives away the game early on in the film when she notes that what is astonishing about the Plymouth story is the way that centering the account of this small group of “religious nutters” (so termed by Pauline Croft of Royal Holloway, University of London) for so long marginalized other histories, including those of Native Americans and the more than 10 million enslaved Africans. Responding to the historical construction of the Pilgrims is at least as important as recounting the history of their colonial venture. The Pilgrims doesn’t do this, however. The film is really telling three stories. First, it is an account of a small separatist congregation from the English village of Scrooby, an even smaller group of which migrated first to Holland and then to a colony on Cape Cod. Secondly and more briefly, The Pilgrims is the tale of their often but not always violent encounters with the native people of New England. Third and most profoundly, it is the history of a single text, William Bradford’s Of Plymouth Plantation, which frames the film.

Bradford was not the leader of the Scrooby separatists, nor was he the first governor of the Plymouth colony or its only chronicler. But it was Bradford’s Of Plymouth Plantation, a deeply personal journal about the Pilgrims and the Plymouth colony’s first three decades, that came to dominate 19th-century New England historians’ accounts. Unlike some other contemporary depictions of the English colonies in North America, Bradford’s history was not published, let alone popular. The manuscript circulated in the late 17th and 18th centuries among a small group of early historians of New England, then disappeared in the years following the Revolution and was finally found in England.

Nineteenth-century New Englanders’ assertions of Plymouth’s centrality to the founding of America get a quick five minutes at the end of The Pilgrims.

A version was published in 1857, and the original was returned to Boston in 1897, to great acclaim. Its restoration was greeted, Kathleen Donegan of the University of California, Berkeley, tells us, as “a scriptural event.” In the wake of the post–Civil War assertions of New England as the seat of American identity, Of Plymouth Plantation helped cement Plymouth as the American origin story. Plimoth Plantation opened as an outdoor historical museum in 1947. This critical piece of the myth’s construction— how 19th- and then 20th-century New Englanders asserted the centrality of Plymouth to the founding of America— gets a quick five minutes at the end of The Pilgrims.

The late Roger Rees, a distinguished stage actor perhaps best known to American audiences as the love interest of Kirstie Alley’s character on the sitcom Cheers, portrays Bradford—mostly by reading from Of Plymouth Plantation. With stringy hair, straggly beard, and haunted eyes and tone of voice, Rees prompts viewers to understand that the Pilgrims struggled and suffered a great deal. We don’t see much of any other historical figures, and then mostly around corners, through windows and behind fauna, and in fuzzy crowd scenes. We also don’t see much religious fervor. (During a family viewing of The Pilgrims, I was asked why “being religious means staring off into the middle distance with misty-eyed melancholy.”) Actually, we don’t see much energy at all. In this sedately paced film, even running happens in slow motion.

The violence and intensity of early colonial New England is mostly left to the deep bench of commentators to narrate. Donegan, the author of Seasons of Misery: Catastrophe and Colonial Settlement in Early America (2014), becomes The Pilgrims’s Shelby Foote, its interpretive center. She tells us what the enormity of death, first from plague and then in war, meant for Native Americans and, though in numbers pale by comparison, for the colonists. She tells us what William Bradford would not, which is, within a few years of colonization, the meaning of beheading an Indian and putting his head on a pike at Plymouth, where it would remain for decades. She suggests that Thanksgiving, which is so much about bounty and community today, was in its first Plymouth iteration a cover for incredible loss and the utter absence of human fellowship.

Ric Burns was not the only one who offered to reintroduce us to the Pilgrims last Thanksgiving. The National Geographic Channel teamed with Sony to produce a two-part, four-hour drama, Saints & Strangers, which the AP called “the Game of Thrones version of the first Thanksgiving.” What is most disappointing about these and other efforts that reinforce the importance of the Pilgrims even while they wink and nod to the mythology, is the subject position they require the reader/viewer to take. “We” are still oriented from the east, coming west. The story is still the Europeans’ story. The protagonists are still the colonizers. Donegan remarks at the very end of The Pilgrims that “somewhere, William Bradford might have smiled,” and though she is referring to the triumphal return of his manuscript history of Plymouth to Boston in the late 19th century, and though throughout the film he is portrayed as resolutely morose, one suspects she is right.

Karin Wulf is director of the Omohundro Institute of Early American History and Culture and a professor of history at the College of William & Mary.