Why Americans Get to Talk So Much: The Making of Free Speech Law

“To justify suppression of free speech there must be reasonable ground to fear that serious evil will result if free speech is practiced.”

Some things never seem to change. Speech was under attack in the United States in 1798 when Congress passed the Alien and Sedition Acts. It was targeted again during and immediately after World War I and during the McCarthy era of the 1950s. It is threatened once more today. 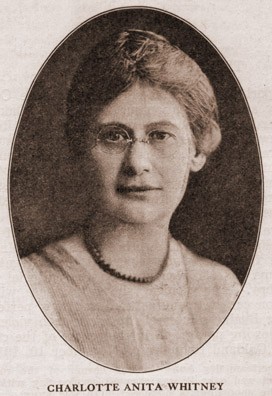 The US Supreme Court case in which Justice Brandeis penned the words above was Whitney v. California. Anita Whitney (1867−1955), a social worker, was the descendant of five Mayflower pilgrims. Her dismay at the poverty she encountered and the power of the huge trusts that dominated so much of the American economy in the early 20th century led her to become first a socialist and then a communist. In 1919, she helped create the California Communist Labor Party. The party eschewed violence, calling instead for labor action such as strikes and demonstrations, and for involvement in the political process. Nonetheless, later that year, the state of California put Whitney on trial for advocating and helping organize action for political and economic change. She was sentenced to up to 14 years in San Quentin prison.

Whitney was tried during one of the United States’ periodic bouts of national hysteria. Americans in the post-World War I years were certain that communists were running rife and were about to wreak havoc on the nation. One victim of that period was free speech. President Woodrow Wilson had declared in 1917 that “censorship … is absolutely necessary to the public safety.” Congress agreed, and enacted the Espionage Act of 1917. As amended in 1918, the act outlawed “any disloyal, profane, scurrilous, or abusive language about the form of government of the United States, or the Constitution of the United States, or the military or naval forces … or the flag … or the uniform of the Army or Navy.” American states were quick to enact their own variations on the Espionage Act, and Anita Whitney was tried under the version California passed in 1919.

1919 was also the year in which the Supreme Court declared that the federal Espionage Act was constitutional, in spite of the First Amendment’s pronouncement that “Congress shall pass no law … abridging the freedom of speech.” Justice Oliver Wendell Holmes Jr. wrote three unanimous Espionage Act case decisions for the court that year, penning the soon-to-be-famous “clear and present danger” test but failing to define the legal meaning of “clear” or “present” or “danger.”

Brandeis initially signed onto Holmes’ formulation. By 1924, however, he had begun to rethink, and admitted that in 1919 he had “not then thought the issues of freedom of speech out—I thought at the subject, not through it.” His thinking “through” resulted in an opinion in the Whitney case that laid out the importance of free speech in a democratic society and effectively eviscerated the vague “clear and present danger” rule.

Citizens cannot participate intelligently in the political process if they do not have access to all the ideas that others hold about the day’s issues, Brandeis declared in Whitney, no matter how heinous those ideas may seem at the moment. Additionally, citizens must be able to test their own ideas in the court of public opinion. “If there be time to expose through discussion the falsehood and fallacies, to avert the evil … the remedy to be applied is more speech, not enforced silence”—or, in other words, speech must be allowed unless serious danger is imminent. It is the responsibility of citizens to counter bad speech with good speech. Speech that is repressed merely goes underground and so cannot be challenged. Convinced that democracy would make no sense if we did not have faith in the ability of citizens to reject bad ideas, Brandeis shaped a doctrine that has made American speech freer than that in any other country of the world.

That is seen by some people today, at another moment of societal anxiety, as a problem. Is it wise to allow unfettered speech in the Internet age, they ask, when it includes phenomena such as cyber-bullying, revenge porn, and terrorist recruitment? Could the harms done by them outweigh the danger of government censorship? Internet platforms such as Facebook, Reddit, and Twitter have adopted policies designed to minimize such speech on their sites, but the federal government wants them to do more. Such corporate censorship might help solve the problem but raises concerns of its own. Another challenge to free speech comes from college campuses, where students who are understandably distressed at what they see as hate speech seek to impose their own form of censorship both in and outside of the classroom.

If the history that produced Whitney v. California is any guide, today’s fears will pass but other challenges to speech will appear in the future. Perhaps it is time for a serious conversation about what this nation’s speech policy should be in the 21st century and beyond.

Philippa Strum is a senior scholar at the Woodrow Wilson International Center for Scholars and professor emerita of the City University of New York. Her writing is primarily about American government and constitutional law with an emphasis on civil liberties and human rights. Her most recent book is Speaking Freely: Whitney v. California and American Speech Law (University Press of Kansas, 2015). Her author page on Amazon can be found here.