Can the South Asian Academic Speak from Abroad? Colonialism and Anticolonialism in Modi’s America

Today’s India produces news of peaceful protesters killed, mob lynchings of Indians suspected of violating beef bans, and shootings of rationalists (critics of idol worship and superstition). Public opinion in India and abroad is increasingly aghast at the regime of Prime Minister Narendra Modi of the Hindunationalist BJP party. Indian writers, artists, and scholars have returned prestigious government awards to protest the government’s promotion of violence and a politics of hatred. Scholars of India abroad have joined in these actions—most recently, a letter of protest by 50 Indian historians was echoed by an open letter from their overseas colleagues. But this international solidarity revealed another facet of the regime’s intolerance: it turns out that in Modi’s India, the South Asian academic cannot speak from abroad. And this has important implications for how the global academy, anchored as it is in the United States, thinks about its role in politics around the world. 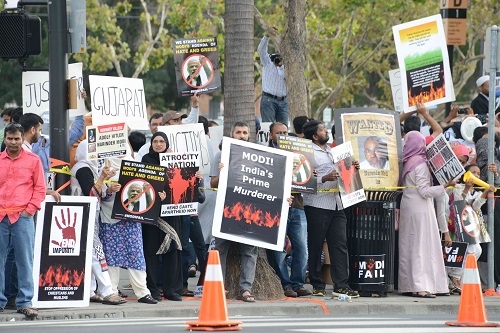 Modi is popular, in and outside India. Last fall, tens of thousands of Indian Americans in the United States received him enthusiastically during his high-profile visit to Silicon Valley, where he also met with the CEOs of Google, Facebook, and other major corporations to promote his Digital India initiative. He also faced protests from many South Asian minorities, for many of whom the United States is a refuge from an India in which national community is routinely forged through violence against minorities. Academics also stirred controversy: some 130 US-based faculty working on South Asia–related matters from different disciplines and institutions signed an open letter registering their concerns about the potential privacy abuses of Digital India, particularly in light of Modi’s record of policing dissent and curbing religious freedom.

I signed the letter, following it up with an op-ed in the Huffington Post. I and the other signers of the letter immediately received a stream of hate mail accusing us of sabotaging India’s development and threatening to blacklist us (even while ironically asserting Hindus’ particular “tolerance”). To these self-appointed defenders of India, many writing from addresses outside India, those speaking critically from perches at American universities wittingly or unwittingly do the work of Western imperialism in undermining India’s progress.

Most of the scholars who signed the letter about Digital India have unquestionably anticolonial credentials. Many position themselves as scholarly ambassadors of India, seeing their role in the American academy as partly one of correcting centuries-old Western misperceptions deeply embedded in scholarship on the region. Moreover, the universities they speak from are hardly exclusively “Western” but have long since evolved into “global” institutions in terms of student body and faculty. Indeed, many of them—Oxford, Cambridge, UC Berkeley, Columbia—served as critical sites of anticolonial intellectual ferment and organization in the last century, attracting key figures in the making of independent India, from Mahatma Gandhi and Jawaharlal Nehru to the founders of the Ghadar movement and B. R. Ambedkar, none of whom seemed any less patriotically Indian for their sojourn abroad. These universities, elitist though they were and are, also promoted intellectual and political connections among anticolonialists from different parts of the world, and proved critical to the “third world” bonds of the 20th century.

Leaving aside the matter that Modi’s followers eagerly denigrate figures like Nehru for their relative secularism, the view that humanists at American universities are tools of imperialism seems absurd given the continual evidence (including events of last fall) that American humanities departments remain bastions of antiracism and anticolonialism. But, as a letter to me from one angry Gujarati man revealed, the 2003 invasion of Iraq provides critical legitimacy to that seemingly paranoid view, proving that Western media can propagate enough misinformation to generate support for regime change wherever the United States likes. “Western media” and its scholarly authors seem sinister in a new way. To Modi supporters, any criticism of him risks triggering an American call for regime change in India. There are no critics, only saboteurs. It does not matter whether the academic abroad is ethnically Indian and bearing an assuredly Hindu name, like myself. Because I am employed by Stanford University, Modi’s social media minions consider me an agent of American imperialism.

So where does this leave us? Can a South Asian scholar of South Asia in the West speak critically about India without it backfiring? Presumably, Modi’s supporters would be content for such scholars to continue to speak out against Western misperceptions of India’s history and religions. But what if they stray from criticizing the colonial to the postcolonial record, while, say, commenting on state use of caste or linguistic categories or policing powers? After all, Modi himself is all about pulling India out of its colonial hangover.

Still, I am sympathetic to the notion that, even for the most well-meaning scholar, a position in the West might distort her criticism of India and fuel old Western habits of denigrating the subcontinent. Much of Western media’s coverage of much of the world is problematic, and ultimately it is up to Indians in India to sort their political future—the wave of protests by writers and scholars in India has clearly had enormous impact. Meanwhile, those of us in the West can continue to correct the record on South Asia’s past in our Western context.

But for these distinct roles to be maintained, two conditions must hold. First, Indians within India must be allowed to speak, so they can shape their political future. The scholars in American universities spoke up during Modi’s visit partly to point out how the regime has routinely quashed dissenting views within India. It compiles blacklists, threatens nongovernmental organizations focused on human rights and the environment, and periodically shuts down Internet communications (even while promoting Digital India). As long as Indian rationalists can be gunned down for expressing their ideas, Indians abroad must continue to speak along with those who are speaking at home—not least because the bonds of scholarship and art transcend national borders in too many ways to draw a clear line between those at home and abroad, practically speaking.

The second condition is that Modi must contain his own political acts within India. When he brings Indian politics out of India, he must expect the debate to follow him. Despite his anticolonial rhetoric and suspicion of Western media, he seems incapable of resisting the pull of the West. This is partly because of the cult-like support for him and his right-wing Hindu nationalism among many Indians abroad; the Modi phenomenon is as international as the protests against him. That global enthusiasm is fueled by Hindus’ own bitter experiences as minorities abroad. Modi’s trip to Silicon Valley sought to capitalize on this celebrity and wounded national pride. And this makes his concern about South Asians’ criticism in Western media entirely illegitimate. His own trip was a PR event for the consumption of Western as much as Indian media, to detract from criticism of his policies at home. His supporters have no problem with his use of the media to manipulate Indian politics from the West (while expecting unquestioning assent from South Asians who receive him there). They have no problem with his allowing Facebook to use a Government of India initiative to promote the controversial Facebook product internet.org. Who indeed is the stooge of Western imperialism in this picture?

The problem with Modi’s Western strategy, apart from this odorous corporate sponsorship, is that the West is home not only to fervent Hindu nationalists but to victims of their majoritarian ideology. As long as the Indian government continues to treat its citizens in a manner that forces many of them to seek refuge in places like California, an Indian PM abroad must expect to hear harsh words when he ventures to their adopted homeland. They are the disowned; they do not have the option to go back to India to speak. So they will speak here. The only way to silence their public shaming of today’s India in Western media is for Indians in India to abandon Hindu chauvinism and begin to make restitution for the past. The PM’s trip showed that today, Indians abroad who hold even mildly contrarian views are no longer immigrants, but exiles, castoffs, refugees. It is a new India, indeed.

Priya Satia is professor of history at Stanford University. She is the author of Spies in Arabia: The Great War and the Cultural Foundations of Britain’s Covert Empire in the Middle East (Oxford University Press, 2008) and is completing a new book, Empire of Guns.