You would be hard pressed to find a large public audience as interested in history as video game players. Games with historical settings make up some of the most popular video game titles, particularly in the action-adventure and strategy genres. Moreover, gamers often use development tools to add or improve historical material in previously released games (called modifications, or mods). Yet this enthusiasm for history often lacks any connection to historical scholarship. Most game development studios use history as mere window dressing, and the few studios that do research the past often use inhouse research teams that do not employ a professional historian. Players who create modifications base their additions on a quick reading of Wikipedia rather than use that decidedly un–gamer-friendly place, the library. Should we assume that this lack of connection between gamers and scholarship means gamers lack interest in the work of historians, or might we see it as due to the absence of a compelling way to deliver scholarship to players? 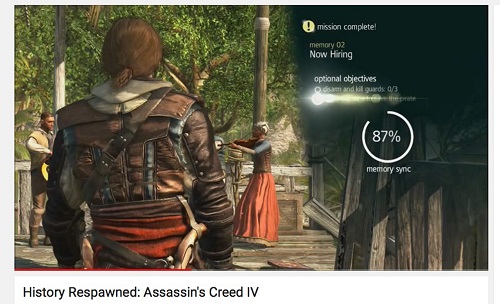 I have been grappling with this question for the last three years. As a gamer and historian, I have always looked for opportunities to bring the two fields together. I admired many of the historical video games I played, but I felt knowledgeable criticism could greatly improve them. I also believed the popularity of historical games meant that players themselves would welcome this type of analysis. I began to test these theories in fall 2012 with a series of essays about historical video games for the website Not Even Past. I enjoyed writing these essays, but I became frustrated with my inability to accurately describe the experience of playing these games for my readers, particularly academics without gaming experience. At the same time, I wanted to provide nonacademic players with the best historical analysis possible. I knew that despite my years of study there was no way I could authoritatively discuss every single historical topic portrayed in these games.

I hemmed and hawed about what to do about these problems throughout the summer of 2013 until I settled on the idea of attempting a “let’s play” video series featuring historians, to be called History Respawned. “Let’s play” is a popular genre of Internet video in which gamers broadcast footage of themselves playing a game while providing commentary. These videos offer viewers an excellent sense of the gaming experience, but they often lack critical analysis. I decided that I would capture footage of myself playing historical video games, and then overlay that footage with a recorded conversation between me and a historical expert on the time period in question. My goal was to provide the viewer with background information without being entirely dismissive of the game’s use of history, and to keep the conversation at a level that would be accessible to a wide audience. Furthermore, I decided to focus the series on the most popular video game titles in order to give my videos the biggest possible impact.

The release of Assassin’s Creed IV: Black Flag in November 2013 provided an excellent opportunity to put these ideas into practice: the game was well reviewed by critics and incredibly popular with players, and it dealt with the so-called golden age of piracy, a period of history constantly drowning in public misperception. When the first History Respawned video with Bryan Glass (Texas State Univ.) on Assassin’s Creed IV debuted, however, I worried that the gaming public would find the content too academic or that they would be turned off by the length of the video (46 minutes: brisk by academic standards; glacial by anyone else’s). Bryan and I felt that we would be incredibly lucky if the video received a few hundred views. Instead, the episode got the exact opposite reaction. Not only was the response to the show overwhelmingly enthusiastic, but the comment section for the video was filled with hopes that future episodes would be longer and include more in-depth historical analysis. The video reached over 11,000 views in three weeks and has been featured on several prominent video game websites, including Gamasutra, Kotaku, Machinima, PC Games, and Rock Paper Shotgun.

The comment section for the first History Respawned video was filled with hopes that future episodes would be longer and include more in-depth historical analysis.

The comments to the first video (over 200, spread between YouTube and other sites) revealed two things that I had long suspected. First, players love historical settings but want to know if these settings are accurate. Second, they want to learn about the accuracy of the game’s history from professional historians whenever possible. The sudden appearance of historians on YouTube discussing video games made some viewers immediately suspicious. One commenter on Reddit wondered if the show’s experts were actual professional historians or self-proclaimed “historians.” Rather than taking this response as an insult, I saw it as an encouraging sign. It confirmed that many players were not willing to accept historical knowledge from just anyone, and that genuine historical expertise would be valued so long as it could be delivered in such a way that players could comfortably and readily consume it.

History Respawned now includes 17 videos covering a number of different time periods and historical topics. Through its interviews with professional historians, the series has given gamers background on piracy in the 18th century (Assassin’s Creed IV: Black Flag), dynasties in feudal Japan (Total War: Shogun 2), slavery in the Caribbean (Assassin’s Creed: Freedom Cry), everyday life in the Eastern Bloc (Papers, Please), and the contested memory of the French Revolution (Assassin’s Creed: Unity). Despite this breadth of history, the series has only scratched the surface of historical content in video games. There are dozens of non-Western history games that the series has yet to tackle, as well as a number of older historical video games that should be considered because they remain popular and relevant despite their age. Moreover, there has been a push among the series’ viewers to include a more diverse set of historians and historical approaches to the show’s analysis. This point was a major topic of interest when I presented at a panel on history and video games in March 2015 at PAX East, one of the biggest annual video game conferences in the world. Talking with my fellow panelists and the audience, we agreed that those involved with video games—developers, critics, and players— need to do more to encourage game developers to tell stories that go beyond popular Anglo-American subjects or themes. This point seems particularly pressing for the video game community, which is so often rife with racism and sexism.

This final issue is where I think historians are well placed to lend their assistance. The game developers and players that I met at PAX all want historical games that are not only compelling, but also accurate and diverse. Yet these two groups will often be the first to admit that they lack the necessary knowledge to make these games. I believe that historians who pursue this audience will not only find an enthusiastic reception but also may come away with new tools with which to tell new types of interactive historical narratives. Historians, however, need to reach this audience where they are currently located. Perspectives on History (November 2014) published an essay in which James Grossman and Jason Steinhauer called for the emergence of “history communicators” to help translate historical scholarship for the public. I agree that our field needs translators to help the public understand and appreciate our work, but these translators need to use the right mediums to make sure that message is heard. Members of the gaming public may be interested in intellectual thought, but very rarely are they interested in the traditional trappings (such as books, magazines, or newspapers) of that thought. We need communicators who are willing to engage the public, but also able to use the 21st-century mediums the public engages with. I believe that video games will prove to be one of the most popular mediums of the 21st century, and that it is well past time for historians to actively engage with that medium and its audience.

Robert Whitaker is a research fellow and visiting assistant professor with the Waggonner Center at Louisiana Tech University. His research project “Policing Globalization” analyzes the relationship between the British empire and international police organizations, such as Interpol. He serves as an editor for the British Scholar Society and is the creator of the video series History Respawned.