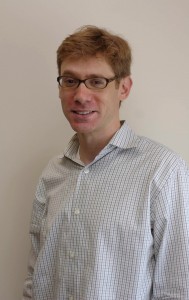 Jacob Kramer is associate professor of history at Borough of Manhattan Community College. He lives in New York City and has been a member since September 1, 2003.

When did you first develop an interest in history?
At first in high school through books such as The Grapes of Wrath. I was struck by the limits placed on individuals due to larger historical forces. But my first introduction to history as an interpretive story, rather than a chronological narrative, came at Columbia University during my freshman year, when I took European history from 1919 to the present with Robert Paxton. Professor Paxton explained much of the 20th century in terms of the impact of World War I, including fascism, communism, the Depression, and World War II, as well as European postnationalism. He also raised the difficult issue of collaboration under fascism, which has continued to be a key problem in my thinking. I remember he asked, “Is simply delivering the mail collaboration?”

What projects are you currently working on?
I recently finished a book, The New Freedom and the Radicals: Woodrow Wilson, Progressive Views of Radicalism, and the Origins of Repressive Tolerance, out in 2015 from Temple University Press. This book examines how early 20th-century progressives—those who wanted to ameliorate urban poverty, regulate business, help workers organize—thought about those who wanted to overthrow capitalism altogether—socialists, syndicalists, and anarchists. Since then, I have been working on publicity for the book and several book reviews. I am also starting another book, which will examine how liberals understood radicalism during the New Deal and World War II.

Have your interests changed since graduation? If so, how?
As a graduate student, I focused on the rationalizations of those in power toward resistance and disorder. There was something of a structural angle to that approach. Since then, I have become more interested in people: documentaries like Eyes on the Prize that focus on individuals’ testimony, biographies of prominent women, and writings of compelling intellectuals such as Randolph Bourne. As a graduate student, I was around historians all the time. But I have been struck by the general lack of historical consciousness in many of our public debates, and I have been preoccupied with trying to get students interested in history. Theoretical issues tend to assume an interest in the substance, so I have been more interested in getting at the substance of issues in a clear and accessible way, and learning more about new subjects.

Is there an article, book, movie, blog, etc. that you could recommend to fellow AHA members?
I would actually recommend the biography of Helen Keller by Dorothy Herrmann (Helen Keller: A Life). I had read a review of this book some years earlier in the New York Review of Books, but one of the nice things about revising my book was that I could take the time to read a little more deeply in some of the topics that were not immediately in my purview as a graduate student. Helen Keller gave the impression of being a well-to-do lady in the bourgeois mold, but I became aware as I was writing my dissertation that she was a socialist. What I did not know was that her teacher, Annie Sullivan, had been desperately poor, and was left with her brother in a decrepit poorhouse when her mother died. There is a heartbreaking description in Herrmann’s book in which Sullivan recounted watching her brother die of tuberculosis. This experience appears to have shaped Sullivan profoundly and perhaps, by extension, Keller. The book is profitably read in conjunction with Philip Foner’s volume of Keller’s socialist writings, Helen Keller: Her Socialist Years. Keller is probably one of the most famous people in the world, but most people do not know that she was a socialist. In fact, she joined the Industrial Workers of the World, which endorsed sabotage. That is how compelling the anticapitalist point of view was in the early 20th century.

What do you value most about the history profession?
I like the way the profession is run on principles of engagement with meaningful material rather than business principles. Of course this orientation has been changing, but I still feel that when I can sit down and read a book, or have a discussion in class, and by doing my work, that I am achieving something meaningful that also contributes to the social good as well as making a living. That is a unity of the ideal and the practical that I aspired to achieve as an undergraduate, and it is still serving me well.

Why have you continued to be a member of the AHA?
The AHA is a critical connection to the rest of the historical profession. Even if I am immersed in teaching and family responsibilities, I still receive the journal, e-mails, and the newsletter, and I know generally what is happening in the profession. I also like the programming you have for community college professors and affiliated societies at the annual meeting.

Do you have a favorite AHA annual meeting anecdote you would like to share?
I was at I believe my second AHA meeting, and I was one year away from finishing my degree. I did not have any interviews set up, and my executive officer had advised me not to go for the purpose of seeking a job, but I went anyway. I made use of the resume drop, and sure enough I got an interview for a public history position. It turned out that someone interviewing there had gone to CUNY, and also that my relevant experience at Foreign Affairs, where I had worked as an editor, had caught his eye. This led to a second-round interview and a job offer. This was a valuable experience because it showed me that it is not possible to know what those conducting interviews are looking for, so do not take it personally if you do not get an interview, and apply broadly.

Other than history, what are you passionate about?
I spend a lot of time with my children, who are three and seven years old, read to them often, answer all their questions in as thorough and clear a way as I can. Teaching my children I find is very good practice. If I can explain something to them, I can explain it to anybody.