The National Endowment for the Humanities (NEH) announced today that Patricia Limerick, a long-standing member and past vice president of the Teaching Division of the American Historical Association, will be joining its advisory board, the National Council on the Humanities.

Nominated by President Barack Obama in the spring of 2015, Limerick was confirmed by the US Senate in November. She will begin her service on the 26-member panel as soon as she is sworn in. The National Council on the Humanities meets three times each year and makes recommendations on grant applications and advises the chairman of the NEH. 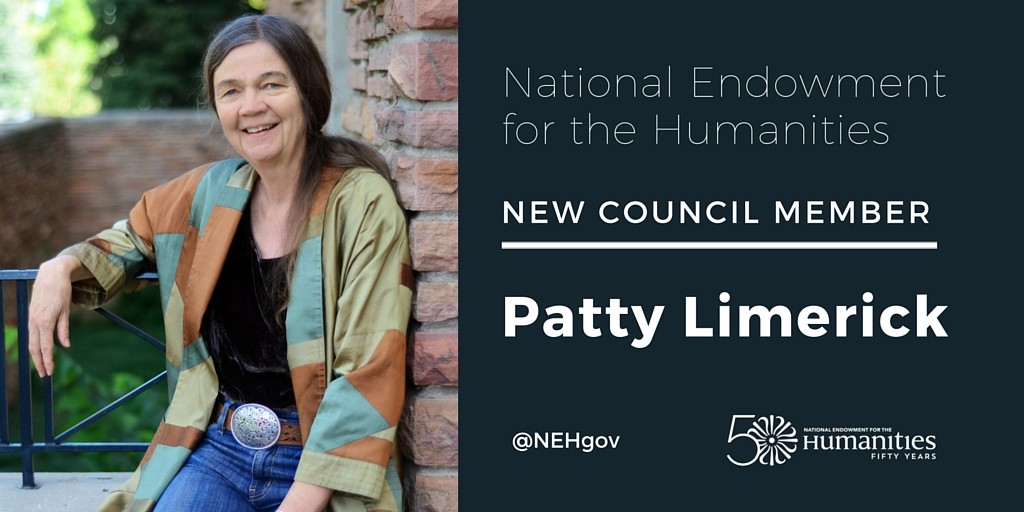 Limerick is the faculty director and chair of the board of the Center of the American West at the University of Colorado, Boulder, where she is also a professor of history and environmental studies. She is the author of the books Desert Passages, The Legacy of Conquest, Something in the Soil, and A Ditch in Time. Everything has a history, and Patty Limerick joyfully explains that history with verve, wit, and clarity, whether as a public speaker or in her frequent columns in the Denver Post and other newspapers. She has also been the recipient of a MacArthur Fellowship and the Hazel Barnes Prize (the University of Colorado’s highest award for teaching and research).

Under Limerick’s leadership, the AHA’s Teaching Division inaugurated the Association’s acclaimed “Tuning” project which has helped history departments in colleges and universities across the country appreciate the wide-ranging implications and value of intentional and clearly articulated outcomes for the history major. In January of 2016, Colorado Governor John Hickenlooper appointed Limerick to the post of State Historian.

Limerick’s response to her appointment to the National Council on the Humanities exemplifies not only her literary style, but also her approach to public service: “My two older sisters were cheerleaders in high school, and I was not.  Thus, this appointment to the National Council for the Humanities gives me a chance to make up for lost time. I am eager to do everything I can to cheer for the under-utilized power of the humanities to benefit the nation and the world. This is a cause I have believed in since the bookcases of my hometown public library provided my habitat of preference, while my sisters were out on the field, energetically rallying our fellow citizens in Banning, California, to a common cause.”

The AHA congratulates Patty Limerick on this well-deserved appointment and looks forward to cheering her continued public service in a new venue.

Portions of the above text have been adapted from information supplied by the NEH. For additional coverage, please visit neh.gov. For Patricia Limerick’s remarks on her appointment, please click here.