Is 3-­D a Game Changer? At the Smithsonian X 3D Conference

The Buddha Vairochana is an impressive,monument- sized limestonefi gure that looms over thegallery space in the Freer Gallery of Artand the Arthur M. Sackler Gallery at theSmithsonian Institution. If you are able to get close, you can detect (although barely) an intricate example of early Chinese script dating back to the Sui and Tang dynasties, depicting early visions of the universe and the Buddhist cosmos. For centuries, scholars have scrutinized these engravings, making rubbings with black ink on whitepaper to provide more contrast, but the results lack clarity. Within the last year, however, the "laser cowboys" in the Smithsonian's Digitization Program Office unveiled a new, 3- D view of the cosmic Buddha,"unwrapping" the engravings into a flat map, allowing us to view the carvings with more clarity and, consequently, new understanding. Alongside the cosmic Buddha, the small team has begun creating 3- D prints of a number of key artifacts in the Smithsonian's collection, including the Wright brothers' first airplane, Amelia Earhart's flight suit, a RevolutionaryWar gunboat, and a set of casts of Abraham Lincoln's face. They are touchable, in some cases wearable, pieces of history many people rarely get to see, much less get their hands on. 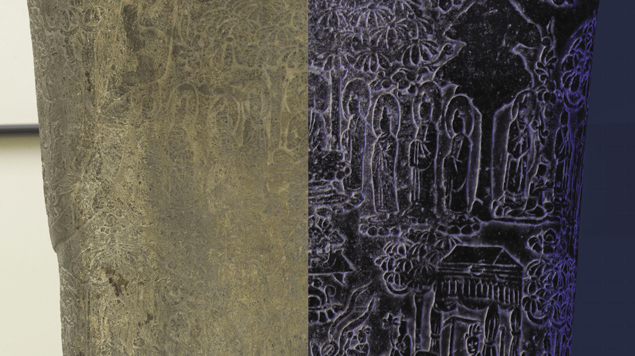 Last week I attended the first-­ever Smithsonian X 3D conference. Technology enthusiasts, government liaisons, journalists, and curious spectators registered for a two-­day 3-­D-­a-­thon that promised to showcase the advances, challenges, and future of 3-­D. The event kicked off with a surprise launch of the 3D Explorer, an online tool that allows users to load 3-­D images, change and manipulate image properties, take measurements, and embed and share their work (via social media, e-­mail, and select software platforms). The project is in beta, and the 3-­D team encourages users to download and play with the explorer and give feedback on the test version (or report any bugs). They have daringly marketed this tool as the end of the “do not touch” barriers preventing patrons from handling and intimately investigating precious artifacts.

According to Gunter Waibel, director of the Digitization Program Office, “Historically, museums have just tried to push data out. It’s been a one-­way street. Now museums are really rethinking their relationship with their audience, and they’re trying to empower their audiences to help them along whatever learning journey they are on.” The 3D Explorer, for instance, allows a user to virtually board a Revolutionary War gunboat, take a guided tour, measure the size and circumference of the deck, and even manipulate the image, including the lighting source, surface properties, and color.

For historians, 3-­D imaging and printing provides an invaluable tool for teaching and storytelling. Most history professionals use material culture in the classroom in some form, but they rarely have access to physical artifacts. While 3-­D imagery will not replace the utility and value of the artifact itself, it offers a complementary approach to viewing and interpreting objects. In the case of the Buddha Vairochana, 3-­D imaging enhances our ability to view intricate details on an object that are too difficult to discern with the naked eye.

Looking toward the future, the Smithsonian, according to its website, is hoping to move 3-­D capture from “pilot to program, and unleash the full potential of 3-­D technology in the museum and research community.” This effort will include reimagining the museum space and the type of exhibits of collection materials it hosts. “Wouldn’t it be great to have Abraham Lincoln walking around talking to people?” Smithsonian Secretary Wayne Clough remarked in his opening speech. “It can be done.” The plan is ambitious, considering the daunting 137 million artifacts in the Smithsonian’s collection alone, but as Waibel pointed out, “This future is not our birthright—­we will have to earn it.” Earning it, as Waibel suggests, includes financial investment and a significant growth in dedicated staff.

Aside from financial and labor costs, 3-­D printing opens the door to a new wave of discussion in the museum community, including questions of access versus preservation (where exactly does 3-­D printing live in these clearly distinct worlds?), copyright infringement (3-­D printing is considered the next intellectual property frontier), and very real concerns about the viability of museums (including visitor statistics). While the conference organizers did not tackle copyright or access issues directly (although a number of attendees represented patent law offices and the US Patent Office), Clough disputed claims that 3-­D printing poses a threat to museums that rely on visitor traffic for funding. According to Clough, the Smithsonian has seen a rise in over five million visitors per year since 3-­D entered the Smithsonian’s purview, illustrating that 3-­D does not inhibit our desire to see the original artifact, but increases our interest and enhances our experience.

What’s next? Smithsonian officials are making a push for museums beyond the Smithsonian system to start 3-­D digitization projects in their own communities. Citing a strategic plan from 1927 calling for the Smithsonian to have an office in every state so it could reach more people, Clough challenged the museum community to build upon the Smithsonian’s pilot project, quoting David Lloyd George, who once said, “Don’t be afraid to take a big step if one is indicated. You can’t cross a chasm in two small jumps.”