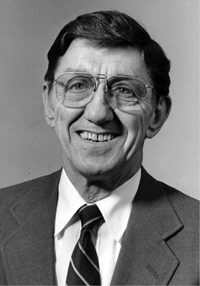 Stanley John Idzerda, a gifted teacher, academic leader, and specialist on the life and work of Gilbert du Motier, marquis de Lafayette, died on August 6, 2013, in St. Joseph, Minnesota, at the age of 93. Known in his early career as an art historian of the French Revolution, Idzerda later became a talented college and university administrator before developing his most distinguished scholarly work as a documentary editor and interpreter of Lafayette’s transatlantic career. In all these roles, Stan remained generous and respectful toward the powerless, as well as honest and unpretentious toward people in positions of power.

Idzerda was born on June 4, 1920, and raised in Brooklyn, New York, during the Great Depression. The son of a lobsterman who had recently emigrated from the Netherlands, Idzerda joined the US Navy, seeking a wider career and intending to become a “lifer.” Those plans began to change on the morning of December 7, 1941, when he survived the Japanese attack on the battleship West Virginia, stationed at Pearl Harbor, Hawaii. Later, he served on the destroyer Drayton, in the Solomon Islands, and at the Battle of Tassafaronga. Identified as having the potential for leadership, Idzerda went to officer candidate school at the University of Notre Dame, where he received a BSN degree in 1945. After the war he attended Baldwin-­Wallace College, developed an interest in history, and received a BA in 1947. The GI Bill provided support for graduate studies at Case Western Reserve University. There his mentor John Hall Stewart, who had studied at Cornell with Carl Becker, was training students to pursue rigorous analysis of French historical documents. After completing his PhD in 1951, Idzerda attended the AHA’s annual meeting, where Stewart had organized a dinner to introduce Idzerda to other Becker students—­Louis Gottschalk, Robert R. Palmer, and Geoffrey Bruun—­who were then reshaping the field of French Revolutionary history in America. Idzerda’s first notable contribution to the field occurred at the 1953 AHA meeting, when he presented a paper that would appear the following year in the American Historical Review as “Iconoclasm in the French Revolution.” That article established his position in the intellectual, political, and cultural historiography of 18th-­century French history.

Idzerda briefly taught at Western Michigan University before moving in 1952 to Michigan State, where he rose from assistant professor to professor in six years. His commitment to undergraduate teaching led to an appointment as the first director of MSU’s Honors College in 1956. Because of his service on the AHA’s Committee for Teaching, he wrote The Background of the French Revolution (1959) for the “blue book” series of the Service Center for Teachers of History. Originally intended for history teachers, it also aided countless graduate students in the field for two decades. In 1962 Idzerda served as president of the Society for French Historical Studies. He taught in the Mississippi Freedom Schools during the summer of 1964.

His ability to work with people from diverse backgrounds and scholarly disciplines propelled Idzerda toward academic administration. He served as dean of undergraduate studies at Wesleyan University from 1965 to 1968, when he accepted an appointment as the first lay (and male) president at the College of Saint Benedict in Saint Joseph, Minnesota. Idzerda immersed himself in the tasks of attracting new students, faculty, and financial supporters to the college; his infectious enthusiasm contributed decisively to the institution’s impressive expansion of enrollments and innovative academic programs.

Idzerda’s career moved in other directions when he returned to his scholarly roots and became editor-­in-­chief of the Lafayette Papers Project at Cornell University in 1974. With primary funding from the National Historical Publications and Records Commission (NHPRC) and the National Endowment for the Humanities, Idzerda organized a diverse editorial team in publishing the correspondence surrounding Lafayette during and immediately after the American Revolution. He wanted to convey Lafayette’s ideas and actions through a careful compilation of the documentary record; he also believed that the documents showed a more complex figure than historians had previously described.

The series Lafayette in the Age of the American Revolution: Selected Letters and Documents, 1776–­1790 (published in five volumes by Cornell University Press, 1977–­1983) received the Gilbert Chinard Prize of the Society for French Historical Studies and the Institut Français de Washington in 1979. These volumes provide a solid foundation for scholarly work on Lafayette and have long served as a model for other historical documentary editions.

Idzerda expanded on his documentary editing in various articles and other interpretive studies, such as his coauthored Lafayette, Hero of Two Worlds: The Art and Pageantry of His Farewell Tour of America, 1824–­1825 (University Press of New England, 1989). He also wrote numerous entries on Lafayette for encyclopedias, historical dictionaries, and the American National Biography. In 1979 Idzerda returned to the faculty at his beloved College of “St. Ben,” where he continued to teach until retiring in 1989. He remained deeply engaged with history and intellectual life, even as he cultivated his garden and cared for his ailing wife Geraldine (“Gerri”) through her last years.

Stanley Idzerda is survived by his seven children and the innumerable students and colleagues who have long admired his integrity, historical knowledge, faith, modesty, gentility, and joie-­de-­vivre.