For a historian with a strong research project, it’s hard to imagine a better venue than the poster session at the annual meeting. Held in a cavernous space off the book expo, Saturday’s poster session was the scrappy underdog of the annual meeting. Participants in this year’s session were rewarded with a steady crowd of interested visitors, including AHA president Jan Goldstein, executive director Jim Grossman, and director of scholarly communications and digital initiatives Seth Denbo, among other senior scholars. 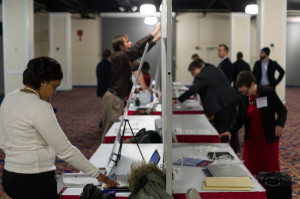 The poster session format has yet to be fully embraced at the AHA meeting, and that’s a shame. The 12 participants, ranging from doctoral students to established scholars with new books, clearly relished the chance to discuss their projects at length with visitors. Several told me that the opportunity to truly talk to people, rather than at them, as one typically does at a panel session, was what drew them to the format. And talk they did, nearly nonstop.

Although there was never an overwhelming crowd, the visitors were steady over the entire two-and-a-half-hour session, and they were always interacting with the participants in some way. Some historians exchanged ideas and sources in conversations that went on at length, while others hung back and waited their turn to ask poster session participants a question or start up a new thread. It’s hard to think of another event in which one would have that breadth of engagement with so many different historians.

The session participants represented a spectrum of research, from exhibitions in the planning stage to dissertations underway to multivolume book series. Although I had imagined this would be primarily a venue for grad students’ works in progress, several canny historians recognized that this was a great opportunity to get newly published work out there. Drew Keeling, who recently published a book on tourism and migration, chose the poster session because he wanted to talk to people and thought this was the best venue for that. I was pleasantly surprised to see that Keeling wasn’t the only one with a mature research project—there were a good number on display. 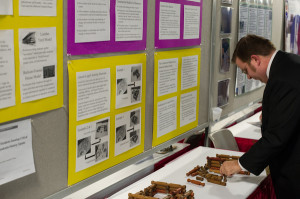 Many presentations lent themselves well to the highly visual format, including  an exhibition on integration in sports, another on resistance to rails-to-trails programs, a teaching exercise using Lincoln Logs, a project on the historical geography of colonization, and one on postwar food rationing and gender. Michelle Iden brought her project on Irish famine memorials because she felt the subject’s complex visual qualities needed a more intensive presentation than a panel paper would allow.

Other participants with less visual material to work with used what they had in inventive and eye-catching ways to get their arguments across quickly. Selah Shalom Johnson brought her dissertation in process on the intersection of the “Free DC” and civil rights movements. Although not dependent on visual evidence, her materials, along with her brief explanation, communicated her argument clearly and succinctly—and she will no doubt make good use of this combination of communicative techniques throughout her career. While many participants confessed to me that they struggled with synthesizing their projects into the brief text and clear design that the format demanded, all agreed that it was an enormously useful exercise in distilling their arguments.

Kathryn Tomasek in some ways had the greatest challenge. Her research project, on creating big data from historical financial records, is entirely digital. Her visuals consisted of tables and lines of code, as did her handouts. I asked her how—and why—she decided to present her work in the flat format of a poster session when her project drew so clearly from the sphere of digital humanities, which often eschews print. She went on at length describing her project, its origins, her various methods, and the audiences she’s presented to, and over the course of our conversation it was clear she was delighted to have the opportunity to talk about her research, no matter where. Every conference, every format gave her the chance to rethink and re-present her ideas, and in the end, her pleasure in doing that made the question seem irrelevant. It’s about the work, not the format.

Given all the benefits of the poster session—the opportunity to get work out there, the utility of refining research into a public-friendly format, the networking and connections the long session affords—it’s hard to see why this type of platform isn’t wildly popular. Long standard in the sciences, the poster session deserves a bigger spotlight at the next AHA annual meeting.