Historical events do not occur in a spatial vacuum; they take place in buildings and landscapes, and are in turn shaped by these environments. Understanding of all history, therefore, necessitates engagement with the history of architecture: the study of buildings, cities, and landscapes, from the smallest to the grandest, as the material documents of history.

Architectural history has continually expanded its boundaries since its founding in the 19th century as a stakeholder in the architect’s aesthetic judgment, and now includes a larger set of questions in the humanities and interpretive sciences. As a result, architectural history in the 21st century is media and methods rich. It has scoped out theoretical and methodological alliances from far afield for a challenging, robust and radical understanding of the production of the built environment. Recent issues of the Journal of the Society of Architectural Historians provide a glimpse of the range of topics and approaches that are defining the field, from the digital modeling of ancient cities and the effect of architectural drawings on the understanding of property markets, to agribusiness and war landscapes.1

Arguably, what constitutes a field or what constitutes the state of a discipline depends on the vantage from which one chooses to view the field and its history. If we assume a panoramic view of the discipline as practiced in colleges and universities in the United States, the developments since the 1940s may be schematized as a series of turns, each introducing new methods and questions to the largely Euro-­American focus of the field. Initially lodged within art history (and its traditional concerns with style and iconography), architectural historians have variously redefined themselves as historians of the built environment (in the 1960s, closely tied to the development of environmental design and planning), as historians of the cultural landscape (beginning in the 1970s, related to the study of folklore and vernacular architecture, and grounded in structuralism and the new class analysis of the 1960s), as cultural historians (influenced by poststructuralism and the cultural/textual turn of the 1980s), and as historians of spatial practice (inspired by the spatial turn in the 1980s and the critique of capitalist production of space). Needless to say, there is much that is overlapping and a large variation in how these approaches have been synthesized by individual architectural historians. It is also fair to say that many in the profession seem perfectly content with primarily iconographic analysis and feel no need to move beyond the scale of the building itself to bring within their purview a larger landscape.

In terms of content, the expansion of what is considered worth studying as architectural history—­from famous buildings and the works of well-­known architects and patrons to an expanded scope that includes a larger chunk of the ordinary landscape of houses, institutions, shops, streets, infrastructure, and public space—­aids this claim on historical understanding. Likewise, expansion of subject matter beyond the Euro-­American core, to include works from Asia, Africa, and Latin America, has energized the field, thanks largely to the critique offered by postcolonial studies. The key turns in the field, however, have not merely added another set of buildings to the canon but have encouraged different ways of seeing the landscape. The traditional panoramic view does not always allow historians to appreciate the significant divergences or radical potential of some of these approaches to the landscape.

One of the outcomes of the expansion of the field is our ability to think of the materiality of the landscape in new and challenging ways. This requires moving beyond the normative assumptions of aesthetic universals, and the individual work, architect, or patron as the focus of study, to make the entire landscape the unit of analysis. Such an analysis approaches the landscape as a product of concrete building activity as well as the result of diffuse imaginations that are, in the words of Dell Upton, “fractured by the fault lines of class, culture, or personality.”2 While this might at first appear to diminish architecture itself as the object of study, it is rather a dispersal of finely honed architectural analyses over a wider terrain of material culture. It jettisons the idea of architecture as a finished work, treats buildings as processes, and evinces a comfort with the idea of smell, touch, and sound contaminating the perception of architecture as a visual phenomenon. Such a method allowed Upton to demonstrate the ways in which an elite republican spatial imagination that sought to control the messy landscape of antebellum US cities by laying down a visual order—­signified by the relentless rectangularity and transparency of the urban grid—­was challenged by competing claims. Sounds, smells, and the recalcitrant glance cut through the orderly intention of the gridded city, making opaque its transparent claims, blurring class and racial boundaries, and allowing subaltern groups to appropriate urban space and the polity.3

Spatial imagination is the process through which social groups work out the relation between social and physical phenomena, establishing links between physical attributes of people, objects, and other sensory attributes such as sound, smell, and the nonphysical dimensions of ideas and ideals. It is possible to think of spatial imagination as the attribute that, according to William Glover, enables the translation of “social and spatial metaphors into actual physical geometries.”4 Beyond such concretization of ideas and plans, spatial imagination may be thought of as the projective act that challenges the dominant plan and exposes the ideologies that support the normative physical organization of buildings and cities. 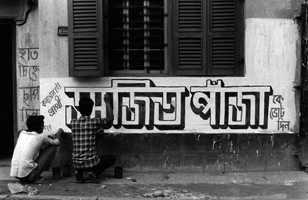 The most effective way of foregrounding the possibilities offered by analyses of spatial imagination is to put architecture through the net of lived experience. Once we do that, myriad ephemeral acts and artifacts that constitute our daily lives come into relief, challenging notions of architectural construction and durability. The permanent acts of building become only one gesture in a much larger set of articulations of habitation.

In a forthcoming article on Chinese urbanism, Cary Liu, reflecting on the contemporary building obsession in China and the emphasis on monumental scale as the demonstration of economic and cultural power, has commented on this bias of permanence that architects and historians share with political authorities. Pointing out the long tradition in China of thinking about architecture’s historical permanence not in terms of the durability of bricks and stones, but in terms of the endurance of words and memories, he notes that “as long as social or even individual memory endures, an edifice’s name and associated poems and inscriptions can outlast its built reality.” Indeed it is the word that sparks the edifice’s spontaneity—­its originality.5

Such problems of durability are not limited to Chinese cities; they take on a poignancy in the rapidly growing cities in the global south. Here, urbanism necessitates coming to terms with ephemerality. And here, everyday practice questions the primacy or apriority of the permanent mark of construction. Every time a poster is pasted on a wall, every time a hawker appropriates the sidewalk, we witness not simply an act that calls into question the original intention of the wall or sidewalk, but also the conditions of the materiality of the wall and sidewalk. A small gesture of appropriation can reveal the multiple meanings inherent in the edifice, most of which are unauthorized. The small acts, in aggregate, constitute the basis of resilient urban formations.

Those activities which we often think of as encroachments on proper space, threatening the social and political order of the public realm, are indeed defiant acts that show up the contingency of spatial meaning and its attendant historical claims.6 Once we make the connection between temporality and materiality, we open up not merely new approaches to understanding the material constitution of the built environment, but new ways of thinking about history and historicity as well.

—Swati Chattopadhyay, professor and chair of the Department of the History of Art and Architecture at the University of California, Santa Barbara, is editor of the Journal of the Society of Architectural Historians JSAH Online.

5. Cary Liu, “Encountering the Dilemma of Change in the Architectural and Urban History of Shanghai,” Journal of the Society of Architectural Historians 73, no. 1 (March 2014, forthcoming).