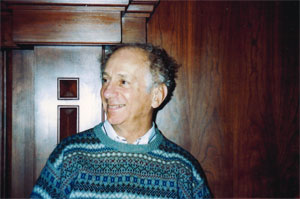 Paul Vanderwood, a distinguished and influential historian of 19th- and 20th-century Mexico, died of cancer in San Diego on October 10, 2011, at the age of 82. Although he did not put much stock in the trappings of academic recognition, he took a quiet pride in his own reputation as a historian. In the last few weeks of his life Vanderwood was unmistakably pleased to be informed that he had won the Distinguished Service Award from the Conference on Latin American History. (It would now be presented posthumously at the annual meeting of the American Historical Association in Chicago in January 2012.)

Born in Brooklyn on June 3, 1929, Vanderwood spent most of his childhood and youth in northern New Jersey. He became interested in journalism in high school, and 1946 began undergraduate studies at Bethany College in West Virginia, majoring in history and journalism, the two career paths he was to follow as an adult. Vanderwood graduated in 1950 and served in the U.S. Army as a lieutenant for three years. He was assigned to Fort Bragg, North Carolina, where he was tapped to be an instructor at the Army's new Psychological Warfare School. Discharged from the Army in 1953, he was hired in 1954 by the Scripps-Howard newspaper organization for a position with the Memphis Press-Scimitar. He was at least twice nominated for a Pulitzer Prize for his reportage on the civil rights movement, including the first trial in 1964 of Byron De La Beckwith for the murder of civil rights leader Medgar Evers.

Vanderwood returned to academia while working as a journalist and completed a master's degree in American history at Memphis State University (now the University of Memphis), during the years 1955–1957. His thesis dealt with the Night Rider movement at Reelfoot Lake in northwestern Tennessee, which broke out in 1908, and was later published in a more developed form as his first book, Night Riders of Reelfoot Lake (Memphis State Univ. Press, 1969). Vanderwood's inclination to pursue history as a career would burgeon fully only several years later when his adventures as an outside program evaluator of the Peace Corps in Latin America in 1963 spurred his interest in the region. He decided to pursue a doctorate in Latin American history, arriving at the University of Texas at Austin in the fall of 1964, where Nettie Lee Benson steered him toward the history of Mexico, and specifically to the little-studied but much mentioned rural constabulary corps, the Rurales, that came to high prominence during the regime of Porfirio Díaz. Vanderwood's doctoral dissertation, "The Rurales: Mexico's Rural Police Force, 1861–1914," was completed in 1969, the year he took up an appointment at San Diego State University (SDSU), where he was to teach until his retirement in 1994.

After a lapse of more than a dozen years, the dissertation, with slight modifications, was published in Spanish in Mexico under the title Los Rurales mexicanos (Fondo de Cultura Económica, 1982). He reconceived and broadened the work under the influence of Eric Hobsbawm's canonical books on social banditry, Primitive Rebels (1959) and Bandits (1969). The result was his widely known, much admired prize-winning book Disorder and Progress: Bandits, Police, and Mexican Development (Univ. of Nebraska Press, 1981; rev. ed. 1992 by Scholarly Resources). In looking more closely at the bandits of 19th-century Mexico instead of the well-mounted but only marginally competent rural constabulary that pursued them, he concluded that they did not have social justice in mind, but sought instead to force their way into "the system" to acquire wealth and social position. What Night Riders, Disorder and Progress, and Vanderwood's later three monographs all share is his clearly articulated concern with the claims of social justice versus legal justice, with the travails of common people and forms of resistance—to the state, to capitalism, to formal institutions—and, increasingly, with the consolations of religion and popular belief systems. Along the way he became interested in nontextual sources of history, publishing prolifically on film, postcards, and photography.

Paul Vanderwood's book on the millenarian uprising at Tomochic, Chihuahua, in the early 1890s, The Power of God Against the Guns of Government: Religious Turmoil in Mexico at the Turn of the Nineteenth Century (Stanford Univ. Press, 1998; Spanish edition 2003), won a major prize like the earlier Disorder and Progress, and is now a staple offering in undergraduate and graduate-level history classes around the United States.

While the writing of The Power of God was in its final stages, Vanderwood dedicated his next large-scale project to the story of Juan Castillo Morales, known as Juan Soldado. He learned about this folk saint in talking with his Mexican and Mexican-origin students at SDSU as early as 1970, when he started visiting the site where a chapel was dedicated to Juan Soldado. His book, Juan Soldado: Rapist, Murderer, Martyr, Saint (Duke Univ. Press, 2004; Spanish edition 2008), demonstrates the same meticulous attention to detailed research and depth of analytic vision as his study of Tomochic, but leans in the direction of a style of writing that Vanderwood believed would make it accessible to a wide nonacademic readership, a goal to which he was more and more committed during his last years. Vanderwood's last published book was Satan's Playground: Mobsters and Movie Stars at America's Greatest Gaming Resort (Duke Univ. Press, 2010), a history of Tijuana and Baja California in the 1920s and 1930s, in which the great casino and resort at Agua Caliente figured heavily. These three books of Paul Vanderwood's "border trilogy" dealt with the disruptive and darker effects of capitalism; with forms of social deviance, violence, and crime; and with the perceptions of common people of the world and their attempts to master that world. His work produced a body of historical writing with a unique authorial voice and an original, highly influential vision of Mexican history and culture. Because of his warm human qualities, he will be missed profoundly by his many admirers, friends, former students, and colleagues in the U.S., Mexico, and Europe.