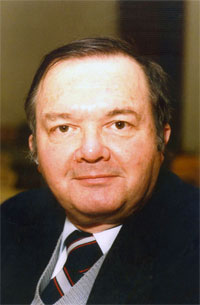 Historian of American Economics and Commerce

Norman W. Smith, who had served in the history department at Rhode Island College (RIC), Providence, Rhode Island, from 1966 to 1996, died on October 21, 2011. He was an Americanist, and a garrulous colleague with a well-focused discursive style. He got to the heart of any historical discussion in a studied way that made listeners sit up and take note. Born in Vermont on September 15, 1930, he was a Vermonter by disposition and understated humor always uttered with an engaging smile, Norman Smith graduated with a BA from Colgate University in 1955, went onto to the University of Connecticut, where he received his history MA in 1957. Subsequently he taught high school for three years in Vermont. His college career was interrupted by Army service during the Korean War for which he was decorated.

A year before defending and receiving his PhD in 1967, Norman, a specialist in the early National Period, began his three-decade service at RIC. He came to RIC during the heady years of departmental expansion and history curriculum growth. Twice he served as department chair, 1974 to 1978, and 1986 to 1990.

At RIC he taught courses on the Age of Jackson, American economic history, the American West, Rhode Island history, U.S. presidential history, and U.S. military history. Very much a student of military sociology, he emphasized in this last course the institutional factors and social psychology underlying policy-formulation and decisionmaking. He was a Ravensky Fellow at the Lincoln Educational Foundation, and received a summer research grant at the Harvard Graduate School of Business Administration.

Strongly committed to community outreach, Norman took many opportunities to promote community understanding and interest in history (local, regional, and topical). He spoke at Rotary meetings, public schools, and senior citizens' groups; promoted History Day in public schools; and traveled around with artifacts to inform and delight young and old. He was a long-time member of the AHA, the Organization of American Historians, the Economic History Association, the Rhode Island Historical Society, the New England Historical Association, and the Society for the History of the Early American Republic.

Being a researcher with many interests, Norman published articles in New England historical journals on, inter alia, "The 'Amhearst Bubble,' Wildcat Banking in Early Nineteenth Century New Hampshire" and the "Ku Klux Klan in Rhode Island." He submerged himself in New England agriculture, industry, labor, and demography from the late Colonial period through the New Deal. One of his most intriguing research projects was the vegetable potash industry and trade in Northeastern North America from 1760 to 1850 to which he brought an econometric perspective. Over the years he presented papers at the Southern New England Historical Association, the Rhode Island Historical Society, the Population Association of America, and the Duquesne History Forum.

Norman loved the world of books and was widely read in scholarly areas across several disciplines. He also loved fiction, particularly American and British fiction of the 19th and early 20th centuries, and donated several collections over the years to RIC's Adams Library and to the University of Rhode Island, Kingston. His last public presentation was a wryly humorous armchair reminiscence, "And Madly Read: Musings of an Amateur Book Collector." An avid newspaper-clipper, Norman by retirement time filled filing cabinets with what had become an enormous amount of news clippings on a variety of subjects that interested him.

He loved learning and believed in its powers to open doors for the individual and by extension to the wider community. Norman was deeply gratified to have played a substantial role in defending the department when, in the early 1980s, the college began shifting faculty positions from the humanities to professional and technical fields, such as business and nursing. He saw increased numbers of undergraduate and graduate students choosing a history major. He firmly believed in personal interaction with students and being available to tutor them should they otherwise be closed out from a required course. These activities, he felt, acted as some of the keys to student and departmental success and to personal fulfillment on the part of the professor.

For years he sung, with his fine tenor voice, in the Mathewson Street Methodist Church Choir in Providence. Norman is survived by his wife, Lola, three children, Warren, Scudder, and Rachel, and three grandchildren.