A Good Year on the Job Market, but Troubles Loom

By most indicators, new and recent history PhDs enjoyed an exceptional hiring season in the 2007–08 academic year, but there is ample evidence that troubles in the economy are now hitting the history job market hard. 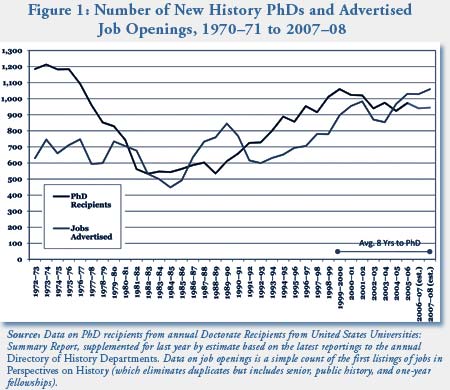 The largest growth in job openings occurred in the public history section of our job listings, which grew by 27.9 percent over the prior year. But there was also modest growth in advertisements from most regions of the country. Admittedly, the numbers are fairly small—an increase of seven positions in both New England and the Mid-Atlantic regions, and four new jobs in the states around the Great Lakes. But given that they were growing from the highest numbers on record, any increase seems very good indeed. Advertisements declined in only two regional sections, the West (down nine openings from the year before), and from foreign employers (which was off by more than 28 percent).

As in years past, openings for specialists in the history of the United States constituted a sizeable plurality of the jobs advertised—almost 30 percent of the total (Table 1). This was markedly higher than the year before in real terms—an increase from 272 openings to 331—and in proportional terms—from 26.5 to 31.3 percent. Some of this growth comes from the expansion in the number of jobs advertised in the public history sector, where the openings are disproportionately in U.S. history, but there was also a real increase in the number of academic jobs for junior faculty.

To get a better picture of the hiring process, we surveyed the departments and organizations who advertised with us last year. In all, 439 advertisers reported on 539 positions that were either filled or cancelled.2 Their responses indicate that there are still large numbers of applicants chasing each position, but the balance between the number of applicants and the number of jobs available has become appreciably closer over the past decade.

Focusing just on the advertisements for new junior faculty (those positions that were open to instructors or assistant professors), the survey respondents reported the smallest average number of applicants per position in the 12 years we have been conducting the survey (Table 2). In the 1995–96 academic year respondents reported an average of 102 applicants per position. This past year, that average had fallen to just 56.

The largest declines were in the fields of European and U.S. history (the fields that have the largest number of doctoral students and openings). Advertisers reported an average of more than 110 applicants for positions advertised in those fields in the 1995–96 academic year; an average that has fallen to nearly 70 applicants per opening in the latest survey. With the exception of African history, the average number of applicants appears to be down by a third or more in all of the geographic and thematic categories.

Needless to say, this tabulation can provide only a very general impression of the potential hiring process for any particular search committee or candidate. As any recent applicant knows, very few advertisements conform to the very broad regional categories used here, as each job listing tends to highlight very specific subspecialties and skills. This creates significant variations in the number of applications for any particular position.

While the long-term trends look quite good for new and prospective doctoral students entering the market, there are a number of deeply worrisome indicators for the current academic year. Even last year, which seemed particularly good, we had a large number of ads cancelled shortly after submission (26). And according to our survey, another 4 percent of the jobs advertised were cancelled after the ad had appeared and applications accepted.

The portents for the current academic year look much more disconcerting. So far this year, advertisements with the AHA are off 15 percent from last year. As of December 1, 2008, we had received 746 advertisements, whereas we had 878 by that date last year.

And an unscientific survey of history department chairs turned up troubling news from coast to coast. Chairs of departments at public and private institutions across the country reported that they were already under pressure from their administrations to pinch pennies and hold off on any new hiring.

Edward Alpers of UCLA reported, for instance, that “the entire UC system is suffering through a major financial crisis and every indication is that it will get worse as the State of California budget crisis deepens.” On the other side of the country, Nancy Tomes at Stony Brook University (part of the SUNY system) reported that “the Wall Street mess has hit New York state very, very hard. Our Stony Brook president has imposed a total hiring freeze, which is not only halting a much needed faculty search but also preventing my department from replacing one of our two professional staff.”

And even where financial exigencies do not stand in the way of a new opening, the effect of the financial situation on faculty members’ personal finances is affecting the job market in other ways. A number of department chairs, both in response to this survey and in communications with staff for the Job Center at the AHA’s 2009 annual meeting, have reported that faculty who had indicated plans to retire subsequently decided to postpone their departure—in some cases, even after their positions had been advertised.
In the long run their decisions to hold off on retirement may be better for their departments, as it may prevent the budget line from disappearing entirely in a hiring freeze. But for applicants coming onto the market this year, it further reduces the number of openings available to them.

It is some measure of the anxiety that departments are feeling that among the 270 respondents to the survey who predicted some retirements from their department over the next five years, 56 expressed some doubt about whether some or all of their positions could be replaced, and another 42 expected to lose one or more lines.

As even casual readers of the Chronicle of Higher Education and Inside Higher Ed know, these problems are affecting academia as a whole, but that does not make the situation any easier for history doctoral candidates who are just finishing their dissertations and are looking ahead to the job market in the coming year.

This also offers cause for caution among those considering doctoral studies, or programs considering taking more students into their PhD programs. Ideally, the current vicissitudes of the market will be as brief as the downturn in 2001–02. But doctoral students and their advisors need to think in the longer term. We know that from admission to degree, doctoral students spend an average of eight years in their studies.3 If you look back at Figure 1, over spans of eight years there have been dramatic fluctuations in the market.

Looking past the immediate financial situation, there are a number of other positive long-term indicators for the employment of history PhDs. In the survey of employers, departments anticipated an average of 2.24 retirements in the next five years—up from 2.14 in 2001–02 and 1.67 in 1995–96. And as we have noted in other recent reports, the proportion of faculty entering (or past) the usual retirement age remains relatively high in our discipline. At the same time, growing numbers of undergraduate students are taking up history as a major field, at a time when the U.S. Department of Education is projecting further growth in the number of students over the next 10 years.

But any optimism needs to be tempered both by the short-term employment picture, and by an awareness of the other employment options that colleges and universities might resort to. For instance, in the 1990s a number of institutions hired growing numbers of part-time and contingent faculty to address rising student demand. As a result of focused attention and lobbying, that trend seemed to stop in our discipline earlier in this decade (though thousands of history faculty are still employed on short-term contracts), even as the growing use of contingent faculty continued apace in other humanities disciplines. Meanwhile other institutions have simply resorted to accepting larger class sizes—a problem cited by history department chairs at a number of state institutions this fall.

So whether we are facing good times or bad, doctoral students and their programs need to take a careful view of the future and be prepared for a wide range of employment options.

—Robert Townsend is AHA’s assistant director for research and publications and a PhD candidate at George Mason University.

1. A large number of candidates come onto the history job market from other departments and disciplines (such as American studies), so the data reported to the annual Directory of History Departments, Historical Organizations, and Historians in the United States and Canada can only provide a baseline for estimates. We will have to wait until the next federal survey of doctorates becomes available for a more precise count of the number of potential candidates entering the market, since it asks new PhDs to self-designate the field in which they earned their degrees. This number generally runs about 20 percent higher than the number reported to the Directory.

2. The contacts for all advertisements submitted were sent the survey in both print and electronic form. In the end, we received responses from just under half of those surveyed, which was slightly higher than in similar surveys conducted in the past. This was the first of these surveys to make it possible to provide information on searches where more than one hire was made, hence the result that information was supplied for more positions than advertised.