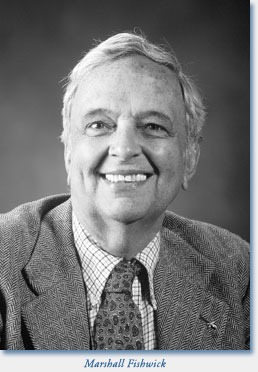 Marshall W. Fishwick died in his home in Blacksburg, Virginia, May 22, 2006, at age 82. Fishwick had enjoyed a successful career as university teacher and curriculum pioneer for over 50 years. He received his BA from the University of Virginia in 1943, served in the Navy during World War II, received his MA from the University of Wisconsin in 1946 and his PhD from Yale in American studies in 1949. Fishwick taught at Washington and Lee (1949–62), directed the Wemyss Foundation (1962–64), chaired the Art Department and American Studies Department at Lincoln University (1964–70), was professor of mass communication at Temple University (1970–76), then moved to Virginia Tech to found and develop the American Studies and Popular Culture programs. He received eight Fulbright awards and was recognized worldwide with honorary degrees from Krakow University, Bombay University, and Dhaka University. He retired in 2003.

Early in his career Fishwick, a lifetime member of the American Historical Association, published widely on Virginia history. His books included Virginians on Olympus (1951), General Lee's Photographer: The Life and Work of Michael Miley (1954), Virginia: A New Look at the Old Dominion (1959), Gentlemen of Virginia (1961), and Lee after the War (1963).

He was an inspiring and deeply informed and innovative teacher. Novelist Tom Wolfe called him "the most magnetic teacher I have ever known," and journalist Roger Mudd praised his teaching dynamism. Having worked with Marshall for 40 years, I can testify to the power and charm of his stimulating discussions. After one of his academic presentations, one of my colleagues volunteered that of the many academic lectures he had heard through the years, Marshall's talks were the best he had ever witnessed.

Marshall Fishwick could not suppress the urge he felt academia needed to fulfill its obligation to students and through them to American society in general. I first met him in 1962 when he was at Wemyss and I was at Purdue University and wanted to hold my first Popular Culture-American Studies Conference. Needing financial assistance, I asked Marshall for Wemyss money. He said he had no money, but enthusiastically approved of the idea and would gladly participate. This was the beginning of our deep friendship and academic association that was to last to the day of his death.

He felt from the beginning of his academic career that new visions, points of view, and energies should be brought to bear on academia. Though he was well trained in American studies, his energy and exploring mind drove him to question conventional tenets. In viewing human societies of the past and present he felt sure that the steady current of the solid ground of the humanities needed to be better understood and appreciated. Economically frugal, Fishwick gave freely of his time and imagination to everyone, especially students and young scholars.

In his effort to revamp the humanities and social sciences, Marshall Fishwick wrote or edited some 40 books. Eight of them were with me, ranging over the vast field of popular culture subjects. For example: Heroes of Popular Culture (1972), Icons of America (1978), The God Pumpers in the Electronic Age (1987), and Dominant Symbols in Popular Culture (1990). He asked me to contribute a chapter for his final manuscript, Cicero, Classicism, and Popular Culture, released in December 2006, but I declined; the topic was beyond my ken.

The last named title demonstrates that he never left home academically and emotionally. He wanted to live the full and rich life in academia, and desired that everyone should join him in its enjoyment. He was sure that this fullest satisfaction was built on knowledge and appreciation of all aspects of popular culture. His was a deep and broad vision.