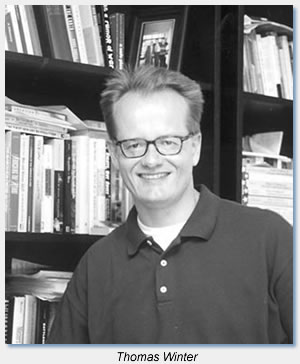 Thomas Winter, assistant professor of American history and acting chair of the Department of American Culture and Literature at Bilkent University in Ankara, Turkey, died of cancer on June 22, 2004.

Born in 1961 in Bremen, West Germany, Winter received his BA from the Universität Hamburg in Hamburg, Germany, in 1987. He obtained his MA (1990) and PhD (1994) in American history from the University of Cincinnati. Joanne Meyerowitz directed his research, which focused on the interaction between constructions of gender and class in identity and specifically on the YMCA and male identity formation in the Gilded Age.

Winter's Making Men, Making Class: The YMCA and Workingmen, 1877–1920 was published by University of Chicago Press in 2002. Through the YMCA, Winter investigated middle-class attempts to harmonize relations between management and labor, and he uncovered fascinating evidence of the use of religion, masculinity, and even song to instill class harmony. The book is one of the most innovative studies in the burgeoning history of masculinity and has received praise in the Times Literary Supplement and the Journal of American History. Winter had also recently begun new and promising research project on the American social hygiene movement and its impact on the state. It was his point that the movement focused on the human body as a way to shape the nation. This research will no doubt shape the development of masculinity studies and will inspire scholars to build on Winter's ideas.

Although young, Thomas Winter had already garnered accolades from some of the most distinguished historians in his field. He had been elected to a three-year term on the council for the Society of Historians of the Gilded Age and Progressive Era and was an editor of the online discussion group, H-SHGAPE (http://www.h-net.org/~shgape/). Recently he was awarded a grant from the American Philosophical Association to pursue research at the Social Work Archives at the University of Minnesota. Among the other grants he received were the Albert J. Beveridge Grant from the American Historical Association (1996), a short-term fellowship at the Newberry Library in Chicago (1993), and a grant-in-aid from the Rockefeller Archive Center (1992). The award of which he was most proud, however, was the Charles Phelps Taft Graduate Fellowship from the University of Cincinnati (1992–93); being the recipient of the well-respected grant indicated the high esteem in which he was held by his mentors and colleagues.

Winter was promoted to acting department chair of the Department of American Culture and Literature at Bilkent University only two years after his arrival. As chair, he pursued the interests of his colleagues and students vigorously and offered his undivided attention to editorial matters, academic promotions, and scholarship needs. Those who worked with him at Bilkent have nothing but praise for his professionalism, kindness, support, and good humor. Winter was a rare kind of academic and administrator; he was open with his ideas and suggestions and enjoyed the challenge of the discussion more than winning the argument. He was both a diplomat and an advocate and was very protective of his department; his colleagues flourished under his care.

Winter relished the special challenges raised by teaching American history and American studies to students in Turkey, and he met them with vigor and talent. Before he secured the permanent position at Bilkent University, he supported his family by teaching as an adjunct professor for four years at three different institutions. When interviewed for a documentary on full-time, “part-time” teaching, he emphasized that he wanted the students to know that even though they were being taught by adjunct faculty, they were not receiving an inferior education. This spirit carried over into his teaching in Turkey; he endeavored to provide the absolute best environment for learning that could be found in any academic program anywhere in the world. His direction and uncompromising dedication to quality transformed what could have been a marginalized American studies department into a relevant and vibrant academic community with an international reputation.

Thomas Winter maintained both a successful career and a rich and loving family life. His commitment to his wife Venitra and sons Rutger and Torbjörn was complete. He was open, funny, engaging, intelligent, serious, loving, direct, and gentle, in short, a man who touched the lives of everyone who ever had the good fortune to have met him. Thomas Winter's death at such a young age is an immeasurable loss to the academic community and to his friends and family, yet the light of his presence in all of our lives will never be extinguished. His absence is profoundly missed.