The Story Doesn’t Fit in a Grid

Remote Research, Curation, and Design in The Land Speaks

Rassawek, the historic capital of the Monacan Indian Nation, juts into the quiet water at the confluence of the Rivanna and James Rivers in Virginia’s foothills. Early American historians know this place, occupied by Native people for thousands of years, from John Smith’s 1612 visit. Today the site has reappeared in the historical record, at the confluence of developments in historic preservation, environmental justice, and tribal history. In 2016, the James River Water Authority proposed construction of a compressor station on the site to support nearby commercial development; after achieving federal recognition in 2018, the Monacan Indian Nation (MIN) fought back. 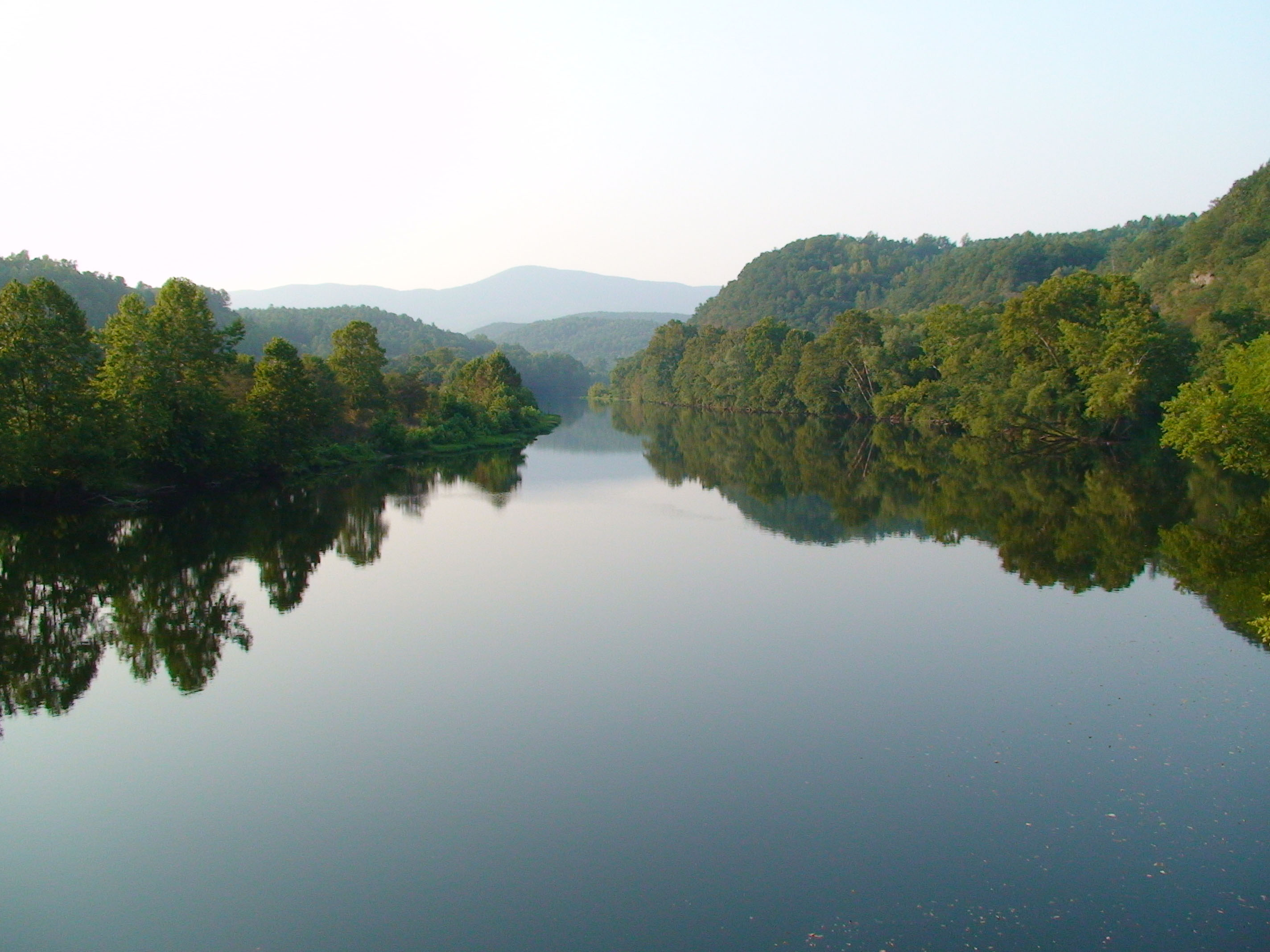 Every campus has a Rassawek, or two, nearby. As educators working at the intersection of public history, politics, and exhibit design, we wanted to work with Monacan people and academics to explore how Native protection of southeastern lands provides context for the Monacan legal campaign for Rassawek. In autumn 2019, faculty in the history and political science departments at nearby Virginia Tech met with Scott Fralin in the University Libraries to develop The Land Speaks: The Monacan Nation and Politics of Memory, an online exhibition launched in May 2020. We wanted to educate visitors about MIN’s history and draw attention to their fight for Rassawek, highlighting Monacan strategies for surviving colonization from early exploration to the Jim Crow era.

Graduate students in Politics of Memory, a class taught by historian Jessica Taylor and political scientists Audrey Reeves and Desiree Poets, collaborated with other scholars and members of MIN to conduct research, draft content, and mount an exhibition. Researching Monacan ancestral land meant researching the region that hosts Virginia Tech and its students. The history of southwestern Virginia features overlapping fights for environmental justice—against pipelines, fracking, and related health disparities. Students grappled with Rassawek’s geographic immediacy, the tangled nature of Virginia politics, and the continued presence of both Native people and colonization in Appalachia and the South.

In January 2020, our team started work on an exhibition that depended on space, a full sensory experience, and visitors. In our early brainstorming sessions, we proposed marking the footprint of a Monacan lodge on the exhibit floor and using 3D-printed artifacts, so visitors could feel the texture of ceramics made by Monacan women hundreds of years ago. We wanted to install headphones so visitors could listen to oral histories and set up touch-screen kiosks featuring the latest news on the Save Rassawek campaign.

Throughout the exhibit’s development, Monacan people and places provided students with insight into the region and controversies. In February, students and instructors took a van to Monacan headquarters in Amherst County. Chief Kenneth Branham led students through the Monacan Ancestral Museum and pointed out contributions from tribal members: photographs, written testimonies, and art that remains central to how their collective story is told. During the ride back, students discussed how the conversation and artifacts resonated with their diverse interests and where the stories Branham shared could fit into the exhibit. They learned that much of the intellectual investment and initial writing in an exhibition occurs during informal encounters and brainstorming sessions.

Every campus has a Rassawek, or two, nearby.

We were committed to stakeholder investment in exhibit development, and members of MIN did contribute their time and expertise to the exhibition. However, we chose to complete the project without requesting formal collaboration with MIN. We made this decision after consulting with non-Native Virginia Tech faculty who already had established working relationships with MIN. They heard our concerns about drawing on Monacan leaderships’ limited time and resources during ongoing litigation as well as our anxiety that the exhibition’s content might unintentionally misrepresent the Nation’s goals for Rassawek. As with concurrent Virginia Tech history projects, the exhibition drew on preexisting conversations between Monacan individuals, faculty, and students. None of our collaborators occupied formal tribal leadership positions at the time. They joined the team as content experts, offering advice to students on sensitive subjects like segregation and burial sites, and pointing out omissions and research avenues. Virginia Tech alumnus and former MIN tribal administrator Rufus Elliott, who consulted on the project, explained, “It is possible to examine an issue, in context, and not consult with the tribal government but rather consult with tribal activists and knowledge keepers. I think academia fails when it does not consult with either.”

Community input reinforced that the exhibit’s purpose and content was decided by many voices. Throughout the semester, Elliott and others provided real-time feedback on exhibit drafts. While honing presentation skills, students reinforced respectful dialogue about difficult topics and learned to incorporate criticism from peers, faculty, and stakeholders.

When COVID-19 shuttered the university, the exhibition team faced hard choices. Tribe members across the state and country were economically affected, and MIN declared a state of emergency and closed their offices. Students, faculty, and collaborators rightly focused on their own needs. By April, it was clear that our plans could not move forward. The decision to “pivot to digital” was not easy, and it was disappointing to shelve our plans for the physical exhibition. But while this pivoting period was one of the most fraught and trying of the spring, it also provided a small source of comfort because this was one thing that was not canceled, not postponed. We found that many of the basics of a good physical exhibit—a meaningful and timely focus, student investment, and transparent collaborations—made for a good online exhibit.

With collaborators at a distance, students integrated input in new ways, on new timelines, and learned how to be persistent, assertive, and professional. They collaborated in ways familiar to anyone now working in a remote office—drafting text in a Google Doc where collaborators commented and made changes. Tribal elder Vicky Ferguson offered thoughts about a near-final section on historic foodways, for example, directing a resourceful student to archaeology reports for new evidence. The exchange reinforced the students’ troubleshooting abilities in a format where the edits themselves are easy. Even published, the exhibit remained a work in progress with adjustments to language (e.g., “town,” not “village”), and the addition of the latest news on the Save Rassawek campaign and a 3D model (completed by a student after final exams). The format accommodated our ever-changing timelines and put current content in front of viewers.

When we decided to take the exhibit online, our first step was to think about what online visitors needed from the exhibition.

When we decided to take the exhibit online, our first step was to think about what online visitors needed from the exhibition. We knew what the content was, thanks to the students, but how should it be displayed on the internet? To try to find the perfect balance of research and inspiration, we looked at a lot of online exhibitions—everything from Solomia Kravets’s Andy Warhol exhibition to the US Navy’s online history exhibitions—and platforms from WordPress to Scalar. It is easy for online exhibitions to look the same: a collection of digital items, maybe organized in a grid or on subpages, with lots of text and small pictures, using a platform like Omeka. Those exhibits are often expansive, comprehensive, and appropriate for their content, but ours was different. As soon as the team decided to go online, Scott began looking for a way to set it apart from so many others. Unlike many exhibitions, this one told the story of the Monacan people from the 1500s until the present day. That story doesn’t fit in a grid or under a rigid hierarchy. It has to ebb and flow and be easy to take in.

The Land Speaks’ digital exhibit mimics the experience of a physical exhibit where possible. It is contained on a single web page, much like an exhibit might be in a single room, and the sections are separated by full-page visuals that indicate the end of a section and give the virtual visitor a pause and a chance to reflect, much as you might while walking through an exhibit. These visual breaks help pace visitors as they move through the exhibit and prevent them from feeling overwhelmed. In lieu of having artifacts for visitors to view or handle, we created 3D models to show the size and scale of recognizable features of a Monacan landscape from hundreds of years ago. The 3D models of a burial mound and Monacan house were created by a student from Virginia Tech’s Creative Technologies major under Scott’s supervision. Online, the exhibition remains live longer than it would in the library and can attract more users.

The exhibit, as a template for adaptable community projects, has promoted ongoing collaborations with Native people on and off campus, including a born-digital exhibit related to Virginia Tech’s Indigenous history planned for spring 2021. The controversy over Rassawek touches on themes of justice and environmental stewardship following a thousand years of Monacan history. The exhibition asks that students and viewers also enter the fray for the long haul. The Land Speaks provides a textured, cohesive story placing regional politics in Native history. Pulling on a single thread, while keeping political contexts and the audience in mind, reveals the endangered places and connected struggles that collectively define the region.

Scott Fralin is exhibit program manager and learning environments librarian at Virginia Tech; he tweets @safralin. Jessica Taylor is an assistant professor of oral and public history at Virginia Tech.