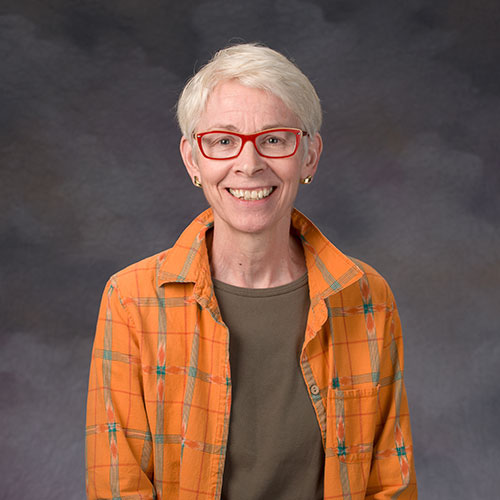 Faye E. Dudden, Charles A. Dana Professor of History emerita, passed away on October 16, 2020, after an 18-month struggle with glioblastoma. She was 72 years old. Faye joined the Colgate University Department of History in 1997, after 14 years at Union College. She remained at Colgate until her retirement in 2016.

Faye grew up on a farm in Camillus, New York. She earned her bachelor’s degree from Cornell University, like her mother before her, and her master’s and doctoral degrees from the University of Rochester, where she studied with Christopher Lasch and Mary Young.

Faye typifies the generation of women historians who made a place for themselves in a male-dominated profession because of their determination and excellence. Much of her work focused on the region in which she lived; her first book, Serving Women: Household Service in Nineteenth-Century America (Wesleyan Univ. Press, 1983), assessed the relationships between rural New York farm women and the young women “help” they hired. With this book, she became part of two groups of scholars, the Upstate New York Women’s History Conference and the Berkshire Conference of Women Historians, who were instrumental in establishing the field of women’s history in the 1970s. In 1994, she published Women and the American Theatre: Actresses and Audiences, 1790–1870 (Yale Univ. Press), which won the George Freedley Memorial Award. In this book, Faye documented the critical change in theatre from an aural culture, emphasizing voice, to a visual culture, emphasizing the body—a shift that has shaped female experience in the modern era.

Much of her teaching and research came to focus on the history of the women’s rights movement in the United States. Her last book, Fighting Chance: The Struggle over Woman Suffrage and Black Suffrage in Reconstruction America (Oxford Univ. Press, 2011), explored the different possibilities of this era before detailing the bitter falling-out between the advocates of woman suffrage and Black suffrage. A final article, “Women’s Rights Advocates and Abortion Laws” (Journal of Women’s History, 2019), complicated the contemporary “pro-life” claim that the founding mothers of women’s rights supported anti-abortion laws and is a clear statement against the misuse of women’s history by today’s anti-abortion forces.

Faye was the recipient of grants from the American Antiquarian Society, the National Endowment for the Humanities, the American Council of Learned Societies, and Colgate University. She was a tireless mentor to young faculty and scholars, an inspiring teacher, and a highly regarded colleague. She served as Colgate department chair from 2000 to 2005 and as a member of the Promotion and Tenure Committee from 2013 to 2015, and she twice directed the London History Study Group.

Faye was direct, no-nonsense, and even blunt, with a wonderful smile and sense of generosity. With common sense and a wicked sense of humor, she deflated the pretensions of others and had no pretensions herself. She had high standards for teaching and scholarship and was dedicated to her students, the department, her colleagues, and the university. Even on winter roads, she drove too fast to campus from her Syracuse home; she couldn’t wait to get to her office. And she was an outstanding, field-changing historian, one of a handful who shaped the writing of US women's history over the past 50 years.

Faye’s talents and enthusiasms extended well beyond the academy. She and Marshall Blake, her husband of 44 years, nurtured many cats and enjoyed travel, especially to Italy and Mexico. Faye was an avid cook, as precise about her recipes as she was in her research, and she was a master gardener. Her plants spilled down the hillsides behind her home in Syracuse and at the early 19th-century farmhouse in Eaton, New York, that she and Marshall lovingly restored. Faye’s botanical donations over the years now grace the gardens of her many friends in upstate New York and New England. We have lost a remarkable historian, a dear friend, and a wise and generous human being.