Black lives matter. Over the last year, both the idea and the movement have awakened a new consciousness in many Americans. The historical profession, however, has long understood that Black lives matter, and indeed much of the vibrancy and dynamism of scholarship over the last half century can be traced to this recognition. Yet the historical discipline, too, was late to foreground race and the African American experience, and the way it did so was deeply problematic. This history is a cautionary tale that we should bear in mind, even as this thriving subfield has emerged as one of the most sophisticated and diverse within the profession. 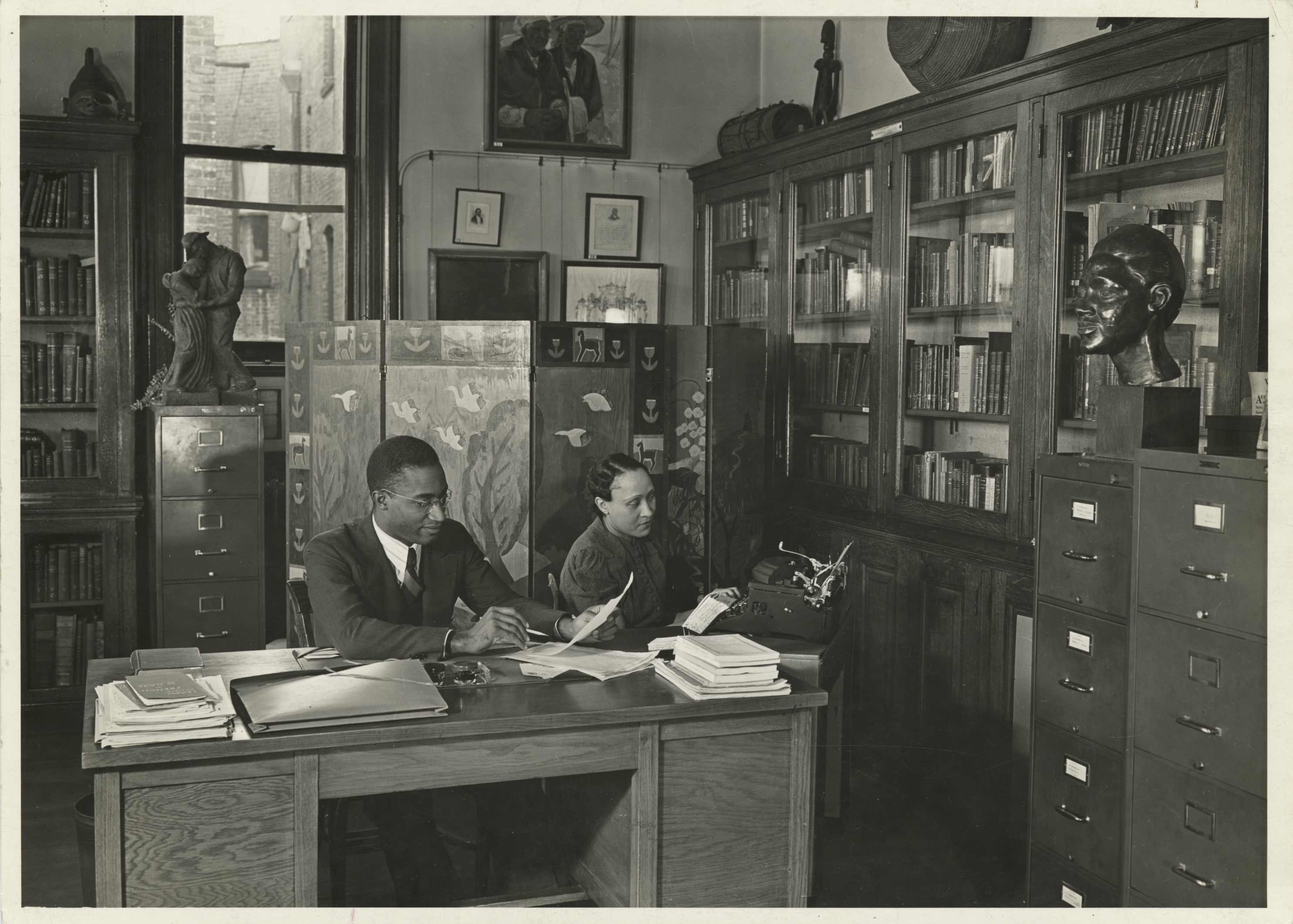 Lawrence Reddick with an assistant at the Schomburg Collection of Negro Literature in the early 1940s. Courtesy of the Photographs and Prints Division, Schomburg Center for Research in Black Culture, New York Public Library Archives. Public domain

There is no better guide into this troubled history than the long-neglected life and thought of Lawrence Dunbar Reddick (1910–95). Reddick was one of a generation of scholars working during the Jim Crow era who laid the groundwork for modern Black history. But these historians’ contributions and critical perspectives have long been marginalized—to everyone’s detriment.

Centralizing the Black experience in the 1970s occurred only after two generations of Black scholars had laboriously built up the field, developed scholarly journals, collected and organized primary sources, and devised interpretive breakthroughs. The problem was that the history discipline, like American society generally, was still deeply segregated during the mid-20th century, so Black scholars’ pioneering efforts were all but ignored.

Then, finally, white historians became interested in Black history and brought a perception of legitimacy to the field. Notable early examples include Herbert Aptheker, August Meier, and Kenneth Stampp, but the watershed came in the 1960s and 1970s. Inspired by the civil rights movement and encouraged by their advisers to investigate the origins of racial caste and Black protest, white scholars in the 1970s published a proliferation of landmark studies, especially on slavery. In 1974 alone, these included Eugene Genovese’s Roll, Jordan, Roll; Ira Berlin’s Slaves without Masters; Peter H. Wood’s Black Majority; and Robert William Fogel and Stanley L. Engerman’s notorious Time on the Cross. The fact that all of these scholars were white men underlines how the process by which the historical profession came to prioritize African American history was enmeshed in the larger racial (and gender) inequalities of the time.

Reddick was uniquely situated to critique this New Black History. As a little-known but indefatigable Black historian, he helped to build up Black history and put it in service to the larger freedom struggle. Reddick was part of Carter G. Woodson’s inner circle of Black historians in the 1930s and earned his PhD in history from the University of Chicago in 1939. He served as a curator of the Schomburg Collection of Negro Literature, History, and Prints in the 1940s. As an activist, he participated in the Double Victory campaign during World War II and the decolonization movement thereafter. A co-founder of the Southern Christian Leadership Conference, he served on its board of directors and as its historian for decades, and he mentored Martin Luther King Jr. In 1970, Reddick assumed a tenured appointment in the history department at Temple University. From that perch, he launched a scathing critique of the New Black History and the institutional racism that underpinned it.

Although Reddick had long criticized white control over Black subjects, the breaking point came in 1974 with the publication of Time on the Cross. Using flawed statistical analysis, Fogel and Engerman argued that American slavery was not so terrible, reinforcing the Lost Cause narrative. The book was widely rebuked by historians and had little lasting influence, except as a case study in history gone awry. Far more influential were the more nuanced studies of slavery and its aftermath by white scholars such as Genovese, Wood, Berlin, Stampp, Leon Litwack, and Lawrence Levine, as well as Black scholars such as John Blassingame and Sterling Stuckey. Yet, as a Bancroft Prize–winning trade book praised in high-profile periodicals, Time on the Cross had a sizable public impact.

The history discipline was still deeply segregated during the mid-20th century, so Black scholars’ pioneering efforts were all but ignored.

Reddick responded with a stinging rebuke of the New York Review of Books for handing over its review of the book to white scholar C. Vann Woodward. They published his “Complaint,” in which he wrote, “Why does The New York Review so consistently turn over books on the Black experience to non-Black reviewers? . . . Is it another indication of ‘liberal’ racism that there are no recognizable names of Blacks on The New York Review’s editorial board?” Reddick could have targeted his criticism on the narrower issue of Woodward’s lack of expertise on either slavery or Black history, but, tellingly, he focused instead on Woodward’s whiteness. This reflected the sensibilities of the Black Power era, when the systematic exclusion of Black people from positions of power was a foremost concern. Such criticisms were, of course, controversial, and they put Reddick at odds with contemporaries such as John Hope Franklin, his Fisk University classmate and a leading scholar of Black history, who prioritized a color-blind approach to scholarship.

In April 1975, Reddick helped organize a conference at Queens College, where predominantly Black intellectuals strategized over how to critique the “white takeover of Black history,” as Reddick dubbed it. Black scholars, including economist Julian Ellison and historian Vincent Harding, convened with white figures such as Herbert Aptheker to stridently rebuke some of the new books. Despite their differences, Harding criticized them all as an attempt “to deny slavery, to deny the ‘burden of slavery.’” The group claimed that the real problem lay in the structures in academia and publishing that led to this bumper crop of white-authored books.

Two months before the conference, the New York Times published an interview with Reddick in which he articulated these criticisms for a public audience. He explained how generations of white historians had ignored sources from African Americans themselves when writing histories of slavery and other topics. Slave narratives, Colored Conventions, and Works Progress Administration interviews of formerly enslaved people were all bypassed in favor of sources such as plantation records. His point was clear: Black scholars knew better. They were the true experts on these topics, and they were the ones who had safeguarded and archived Black sources for generations. Accordingly, they should be positioned institutionally, as professors and other professionals, to preside over the study of Black people.

Reddick’s case was made stronger by the fact that even those white historians who were incorporating Black sources did so only on the heels of Black scholars. For instance, the WPA slave narratives were fundamental to the work of Genovese, George P. Rawick, and many others. But absent among the praise heaped upon these scholars’ books was a recognition of the work done by the Black scholars who had not merely inaugurated the gathering of the sources but had long ago developed pioneering interpretations of them.

Although Reddick lost plenty of these battles, in many ways he won the war.

Reddick’s 1937 state-of-the-field essay in the Journal of Negro History demonstrates this. It proposed new studies of slavery that explored enslaved people’s resistance and viewed the institution “through the eyes of the bondsman himself.” Those ideas did not become prevalent among white scholars for another three decades. Segregation had effectively cordoned off these insights from the mainstream profession, diminishing scholarship for a generation. Indeed, white historian David Brion Davis, whose The Problem of Slavery in Western Culture (1966) netted him a Pulitzer Prize, later confessed to being oblivious to Black historians’ work during the 1950s.

Given all this, it’s not hard to understand Reddick and other Black historians’ frustrations in the 1970s. Now that the wall of segregation in the profession had been breached, white scholars, as Reddick saw it, still monopolized positions of authority. Only now they were using that authority not to marginalize the field, but—perhaps worse—to preside over its study. Black history positions were opening at universities, and research grants were being awarded, but not enough of these jobs and grants went to Black scholars, in Reddick’s view.

Although Reddick lost plenty of these battles, in many ways he won the war. Black scholars refused to surrender Black history to others, and they became the leaders of the field by the 1980s. This was nowhere more apparent than in the landmark conference that resulted in the important book The State of Afro-American History: Past, Present, and Future (1986). Here Reddick interacted with Darlene Clark Hine, Thomas C. Holt, James D. Anderson, and others among the next generation of Black scholars who would remake the landscape of Black history in the United States.

Thanks to their efforts, Black history is now on strong footing, with a deep bench of Black historians available to fill the majority of tenure-track positions in the field. But once again stasis and backsliding has accompanied the progress. The adjunctification of the professoriate generally and the failure of other historical fields to recruit African Americans has undermined broader progress. The historical discipline remains insufficiently diverse (racially, socioeconomically, and otherwise), and thus susceptible to the same types of flawed interpretations and institutional inequities that governed university life during Reddick’s time.

To confront these challenges, we will need to engage in ceaseless struggle, as Reddick and his generation of Black scholars have proven. We can start by making this “lost generation” lost no more.

David A. Varel is an adjunct professor of history at Metropolitan State University of Denver and the author of two books, most recently The Scholar and the Struggle: Lawrence Reddick’s Crusade for Black History and Black Power (Univ. of North Carolina Press, 2020).