It lives in infamy, perhaps because charters—written records that cemented a variety of agreements about sales, leases, officeholders, and a host of other legal transactions—are simultaneously rich treasure troves of historical information and, when you read a lot of them in a row, sleep-inducing. 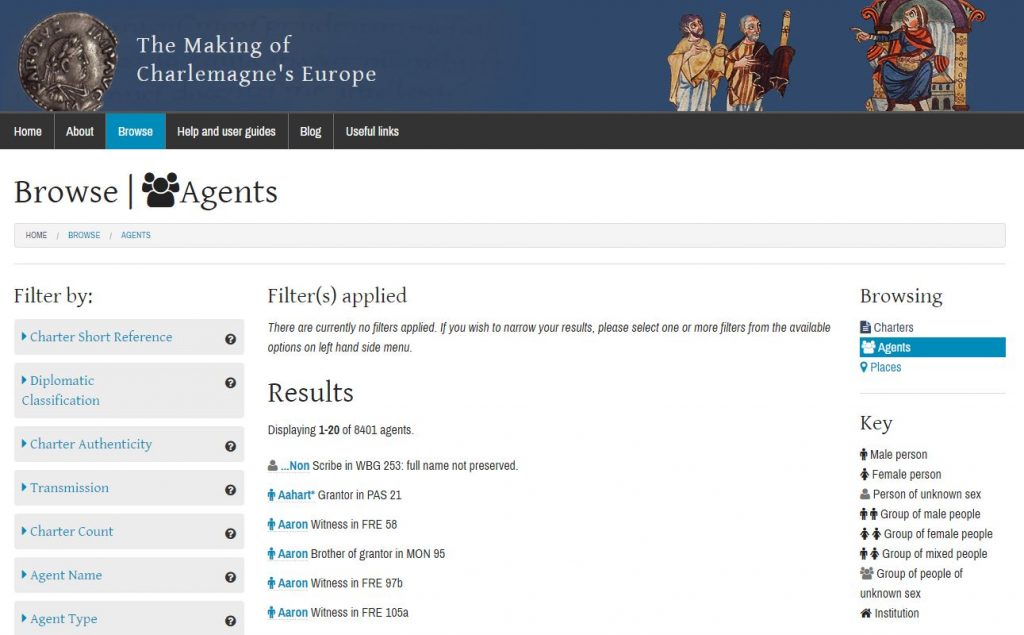 The Making of Charlemagne’s Europe allows users to browse through a list of names, or “agents,” in the charters. http://www.charlemagneseurope.ac.uk/

Enter the Making of Charlemagne’s Europe (MCE). MCE’s focus is on distilling basic information from upward of 1000 charters (or cartularies), mostly property grants dating from 768 to 814 from all over western Europe, into metadata. Instead of reproducing the full text contained in a charter, MCE collects simplified information about when and where a charter was produced, and the people, places, and things that drove its creation.

Dr. Alice Rio, reader in medieval history at London’s King’s College and principal investigator on the Arts and Humanities Research Council-funded project, says that most charters have a uniform set of properties—for instance, a list of witnesses. At the same time, each charter has features that are unique to the agreement that it describes. This combination of standard and unusual features led the team toward a conscious choice to depend on metadata instead of reproducing charters in their entirety. A focus on metadata allows users to do something seemingly simple—like scrolling through a list of names that appear in all of the charters—that would be immensely difficult in a full text-only version.

The focus on metadata as digestible chunks of information makes MCE a gold mine for teachers looking to introduce students to the Early Middle Ages. Even the list of names (the MCE uses the word “agents”) in the charters breaks the wall of presentism; not many people these days are named Acerisinus. Students can filter charter participants by gender, occupation, and role. Each category provides glimpses of what seems familiar to us, but is instead very specific to the early medieval world. For instance, some of the roles offer glimpses into the past that don’t often occur to casual students of medieval history: charter agents are divided into free and unfree in the MCE. Where free charter agents are generally tied to the charter as actively giving or receiving property, unfree agents are often part of the property being given. Other charters are classified as forged to differentiate them from authentic charters.

These choices, very clearly informed by the project team’s expertise, use metadata to give students a glimpse of medieval history in a way that reading a single charter simply wouldn’t do. For instance, a charter from the records of the monastery of Wissembourg near modern-day Strasbourg, contained on leaf 20, dated March of 808 AD, tells us that Theodoin and his wife Agathiu leased 6 properties to the monastery in exchange for prayers and a small rent. Seeing the metadata for several charters linked together provides a much broader context: Wissembourg is the recipient of nearly 150 leases and land grants over the lives of 5 of its abbots. A single charter demonstrates the value that a single family saw in making donations to Wissembourg; the MCE and its network of charters demonstrate the importance that many families in the areas surrounding Wissembourg assigned to making church donations. They also highlight the importance of church property holding in the Carolingian empire.

Collecting metadata is complex. “We were trying to find a way to make a database that was capable of absorbing charter materials from all the different regions of the Carolingian empire,” Rio said. Collecting and collapsing information from charters produced during Charlemagne’s reign into a single database required researchers to take information in medieval charters and condense it into data fields with specific boundaries (for instance, a “name” field). The analytical tool of choice that Dr. Rio’s team settled upon was a “factoid.” Factoids, as explained on the MCE website, are “statements about persons, possessions, and places derived from a source.” They can be of various types, and can capture information about agents, places, transactions, and other miscellaneous data. Many factoids about many charters combine into a big dataset, which can be accessed via a very flexible, searchable, and filterable database. The finished product is a friendly tool that gives users expert guidance as they search and that allows them to surf through similar charters that overlap in witnesses, regions, or other features.

A very well-written student guide to charters provides examples of several types of charters in full-text form so students can see how the factoids are derived from wording in the charter. The student guide also demonstrates how the database can be used in more complex ways as opposed to simply scrolling through lists of agent names or charters. A map interface also lets students see both the scope and size of Charlemagne’s kingdom and narrow their base of interest to engage with the micro-historical past. These features, and the way they are described in the student guide, mean the MCE can help students in a world-survey course understand property and property value by positioning them to understand changing concepts of ownership through time.

Two lesson plans below offer some specific guidance. For instance, comparing a single charter describing an outright gift to a precarial (essentially land rental) charter—samples of both are contained in the student guide—can help students compare early medieval concepts of land ownership to colonial concepts of legal ownership. Finally, the complexity of the decisions behind MCE constitute, as the AHA has noted in its guidelines for digital scholarship, a series of scholarly choices about the significance of documents and the information in them. Walking students through the choices that Dr. Rio’s team made—choices like the inclusion of free or unfree charter participant that aren’t simply “fact” but that require an understanding of the historical significance of slaveholding in the early Middle Ages—can help students see the interplay between historical interpretation and the concrete details that are included in a historical document.