Today’s Banned Immigrants Are No Different From Our Immigrant Ancestors

Underpinning President Donald Trump’s recent ban on immigration from seven predominantly Muslim countries is the belief that these immigrants are fundamentally different than those who came to the United States in the past. An unsentimental look at the history of American immigrants, however, shows that the banned immigrants are not fundamentally different from Americans’ foreign-born grandparents, great-grandparents, or even great-great-great-grandparents. 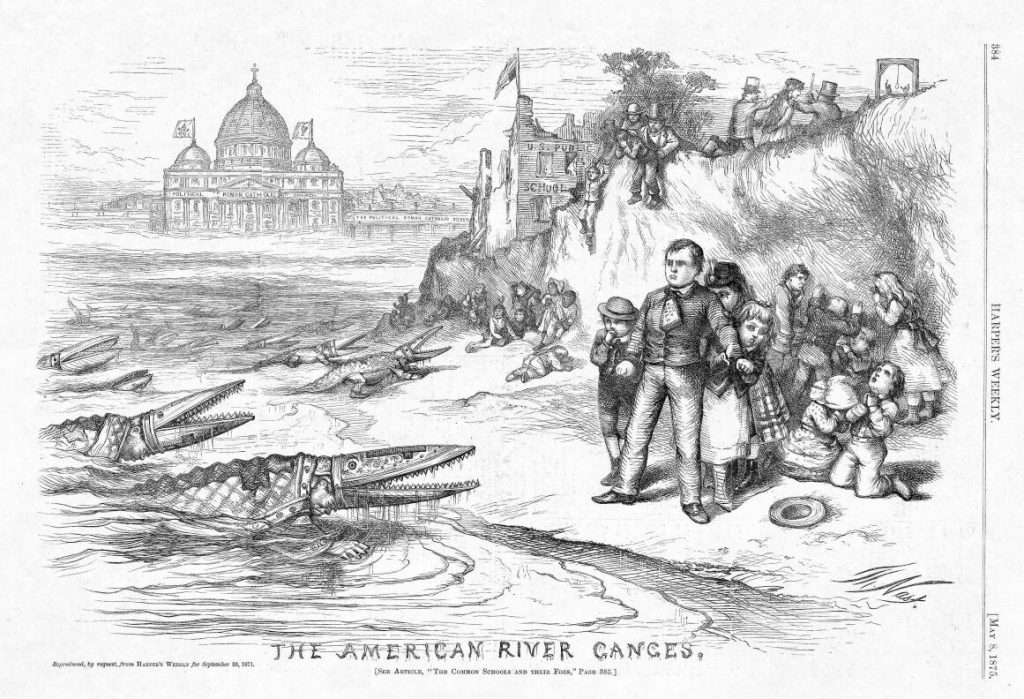 Many believe that today’s immigrants are more culturally isolated than those from the past. Previous generations of immigrants had to learn English and assimilate, runs this argument. They could not “press two for Spanish” or use satellite TV or the Internet to isolate themselves from American culture. Yet Irish, German, Italian, Slavic, Scandinavian, and eastern European Jewish immigrants were just as isolated in their ethnic enclaves in the 19th and early 20th centuries as today’s immigrants are in theirs. New York’s Kleindeutschland was so German, bragged one of its immigrant residents in the 1850s, that one could hardly tell it apart from Stuttgart.[1] Half a century later, adult Italian immigrants rarely learned much English. “I didn’t need it,” one New Yorker explained. “Everywhere I lived, or worked, or fooled around there were only Italians . . . I had to learn some Sicilian, though.”[2] When pundits complain that today’s immigrants don’t assimilate like those from the past, they are harking back to a golden era of assimilation that never actually existed.[3]

Some think that the religious beliefs of today’s immigrants pose an unprecedented threat to American values. Muslim immigrants, it is said, cannot be good Americans because they owe ultimate allegiance to foreign leaders and seek to impose their religious views on others. But Americans once said precisely the same things about Catholic immigrants. A Pennsylvania newspaper 150 years ago likened Catholic immigrants to a foreign army in our midst, waiting for the Pope’s command to destroy Americans’ most valued institutions.[4] Catholics would always remain foreign and separate from the rest of society, insisted an Ohioan. They cannot “really [be] Americans, but only residents in America.”[5] That every immigrant group viewed this way in the past has become an accepted part of the national fabric suggests that American Muslims will one day be fully accepted too.

One might argue that the role of Muslims in some American terror attacks could make it impossible for Muslim immigrants to gain acceptance the way past religious minorities have. Yet a century ago, Americans feared Italian immigrant terrorists every bit as much as they fear Muslims today. In 1919, Italian immigrant anarchists launched a bombing campaign aimed at dozens of prominent Americans. A bomb targeting US Senator Thomas Hardwick of Georgia blew off the hands of his housekeeper. Another destroyed part of the Washington home of Attorney General A. Mitchell Palmer. This wave of attacks culminated with a huge attack on Wall Street in 1920 that killed 38 New Yorkers and wounded hundreds. Nonetheless, Italian Americans eventually overcame the prejudice against them stemming from these attacks, and there is no reason not to believe that Muslim Americans won’t do so too.

Another supposed difference between today’s immigrants and those from the past is that contemporary immigrants eagerly take government “handouts” while previous generations of newcomers were rugged individualists who would not have accepted such assistance even if it had been available to them. Nothing could be further from the truth. Even before the advent of the New Deal, when the federal government began helping the poor and unemployed in large numbers for the first time, there were state, municipal, and even quasi-governmental programs that gave assistance to millions of immigrants. In 19th-century New York, for example, the Democratic Party organization, Tammany Hall, doled out government jobs to both natives and immigrants who had been thrown out of work. Tammany also stole millions of dollars from city coffers to fund an elaborate private welfare program that provided food and fuel to immigrants who were injured, sick, or unemployed. Similar programs around the country helped millions of immigrants make ends meet years before the advent of the New Deal and Great Society welfare programs.

One complaint about undocumented immigrants is that they don’t “wait in line” like previous generations of newcomers did. Several fallacies underpin this viewpoint. First, for most of American history, there was no immigration “line.” Every immigrant who wanted to come to the United States could do so without any wait at all. Immigrants from East and South Asia were a notable exception—for long periods, they were banned altogether. But otherwise, even after Americans began imposing various medical and financial tests on immigrants, 98 to 99 percent of Europeans and North Americans who wanted to come to the United States could immigrate whenever they chose to do so.[6] After the United States imposed restrictions on the immigration of southern and eastern Europeans in the 1920s, several million entered the country illegally. Consequently, very few Americans have ancestors who waited in an immigration line for their turn to become Americans.

The second fallacy is that a line exists in which most of today’s undocumented immigrants could have waited. This is simply not true. Almost all visas given to immigrants today are reserved for family members of those already admitted to the United States or those with highly sought-after job skills. If you do not have such a skill, or close relative already lawfully in the United States, there is no way to immigrate legally—no line to get in at all.

From the days of the Puritans to the present, every generation of Americans has believed that the latest wave of immigrants is completely different from—and inferior to—their own immigrant ancestors and that the newest immigrants pose a threat to American society. Fear of new immigrants may be part of the American character, but so too is the ability to overcome that fear.

Tyler Anbinder is a professor of history at George Washington University and the author of City of Dreams: The 400-Year Epic History of Immigrant New York.

Established by the AHA in 2002, the National History Center brings historians into conversations with policymakers and other leaders to stress the importance of historical perspectives in public decision-making. Today’s author, Tyler Anbinder, recently presented in the NHC’s Washington History Seminar program on “City of Dreams: The 400-Year Epic History of Immigrant New York.”

[3] For a particularly egregious case of a scholar mythologizing about the difference between past immigrants and contemporary newcomers, see “From Many, One Nation: America Must Again Assimilate Its Immigrants,” Washington Post, February 9, 1997.