The Paradoxes of Presidential Power: A Brief History of Executive Orders

We’ve all seen the photo ops over the past few weeks: President Donald J. Trump sitting at his desk in the Oval Office, signing executive orders with a flourish, then proudly displaying his handiwork to the cameras. This flurry of controversial orders has given new attention to an old presidential practice. Earlier this month, the National History Center sponsored a briefing on Capitol Hill that examined the history of executive orders (EOs). Three leading authorities on the subject traced the evolution and exercise of this presidential power, placing the present moment in a context that offered both reassurance and concern. 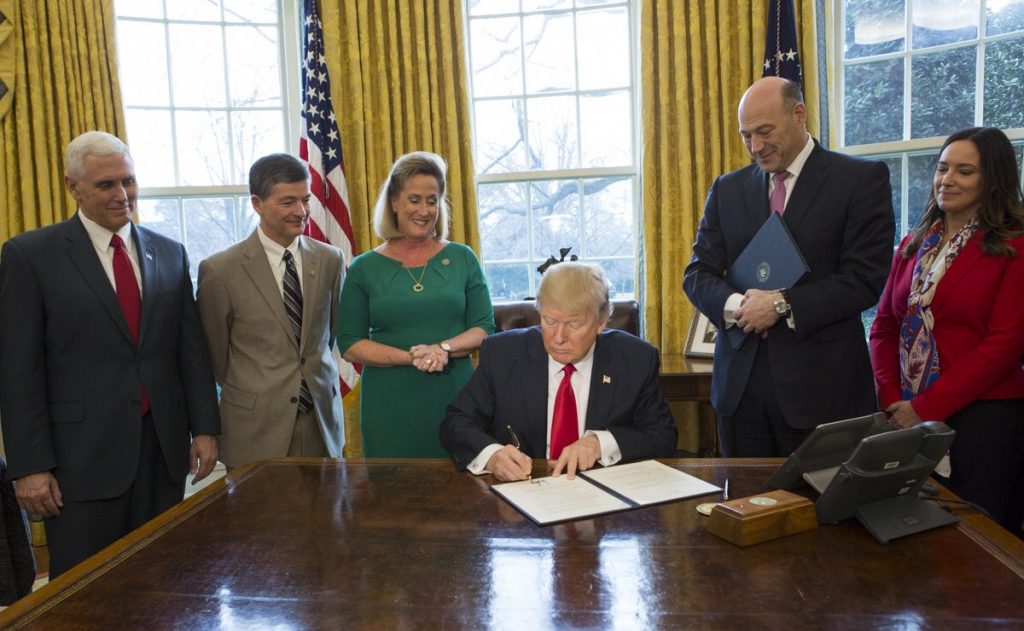 George Washington’s Neutrality Proclamation of 1793 was arguably the first prominent EO, though Washington issued directives as early as 1789. The State Department gave the official designation of EO 1 to an 1862 directive by Abraham Lincoln. Since then, the formal count of EOs had reached 13,776 as of early February 2017, while tens of thousands of other, more mundane orders remain uncounted. Andrew Rudalevige, the Thomas Brackett Reed Professor of Government at Bowdoin College, pointed out in his presentation that EOs are just one type of executive actions: others include memoranda, directives, findings, and more. While the number of EOs has diminished as federal agencies have assumed responsibility for routine orders, they have at the same time become more substantive and significant. They serve four main purposes: to deliver direct orders or interpretations of law, to give guidance for future regulatory action, to structure governmental institutions or processes, and to make a political statement. EOs must be grounded in the president’s constitutional authority or power delegated by statute, though the limits of that authority are subject to interpretation, opening the door to clashes with other branches of government.

Presidents have often used national security to justify EOs, arguing that their role as commander in chief permits them to issue such orders. Matthew Dallek, a political historian in George Washington University’s Graduate School of Political Management, focused his remarks on this aspect of the history of EOs. As wartime presidents, Abraham Lincoln, Woodrow Wilson, and Franklin Delano Roosevelt all issued sweeping orders that rested on national security claims. Most notorious of these is the case of Roosevelt’s EO 9066, which imposed the wartime internment of Japanese Americans. Harry Truman and his successors made national security arguments for EOs during the Cold War, issuing orders to establish federal loyalty tests, laying the foundations of the national security state, and more. Hot on the heels of the Cold War, the “war on terror” has provided a similar rationale for EOs issued by recent presidents. These orders often have come at the cost of civil liberties.

Other EOs, however, have contributed in important ways to advance civil rights, especially for African Americans and other peoples of color. Julia Azari, a political scientist at Marquette University, addressed this aspect of the history of EOs in her briefing. Presidents from Franklin Roosevelt to Richard Nixon used EOs to reduce racial discrimination in those realms that are under executive authority, notably the military, federal housing, and federal contracting. Harry Truman desegregated the military by EO in 1948. In 1957, Dwight D. Eisenhower placed the Arkansas National Guard under federal control by EO in order to desegregate Little Rock Central High School. John F. Kennedy issued an EO in 1962 that banned discrimination in federal housing. Lyndon Johnson did the same for federal hiring in 1965. And in 1969 an EO issued by Nixon established a national program to promote minority business enterprise. In these and other instances, presidents used EOs to ease political pressures from minority groups and give impetus to more lasting legislative action on civil rights.

Given his campaign promises and conduct since taking office, it seems unlikely that the current president is going to use EOs to promote civil rights or other progressive causes. On the contrary, it has become clear that Trump intends to wield this power to restrict civil liberties, round up immigrants, and close our borders. Still, all three panelists made it clear that there are checks on a president’s use of executive orders. One comes from the courts, which can rule EOs unconstitutional. This happened to Truman when he tried to nationalize the steel industry. Trump has run into the same roadblock with the 9th Circuit Court of Appeals, which overturned his ban on entry to the United States by travelers from seven Muslim countries. Further court cases concerning EOs issued by Trump are sure to follow. Another check can come from Congress, which has the power to pass legislation that limits presidential authority or cuts off the funds needed to execute executive orders. Congressional opposition prevented Barack Obama from fulfilling his EO to close the detention facility at Guantanamo Bay. But it seems unlikely that the current Republican-controlled Congress is going to block EOs issued by Trump. As Rudalevige observed, presidential power tends to fill the vacuum left by a supine or stalemated Congress. Finally, however, there is the check provided by the public, which can exert political pressure through protests, passive resistance, and, of course, elections.

So, as we await more EOs from the Trump administration, we can only hope that our constitutional checks will work effectively against presidential overreach. While we can also take some comfort in the fact that some EOs have proved beneficial and others have been fleeting and ineffectual, the history of this practice also gives us cause for concern.