The Future of History: Looking Ahead to AHA18 in Washington, DC

As the final sessions of the 2017 AHA in Denver drew to a close on Sunday, January 8, the sun shone and the temperatures headed toward 50 degrees—a welcome contrast to the blizzard with which the conference had opened a few days before. Much to my surprise, I found myself already looking forward to the 2018 AHA annual meeting in Washington, DC. 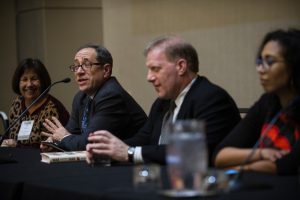 I went to a ton of interesting sessions in Denver, and heard about even more. Some were traditional “stand and deliver” panels: three papers, a chair, and a moderator. But the program was also replete with drop-in sessions, plenaries, and roundtables where researchers and teachers debated everything from the future of military history to “unsettled domesticities” to scholar advocacy and the FAIR (Fair, Accurate, Inclusive, and Respectful Education) Act. I met up with old friends and made the acquaintance of new people whose research I was not yet familiar with. At almost every turn I was amazed by the scope and scale of the work my colleagues are doing at a time when there is much in public discourse and in our lived reality as scholars and citizens to make us doubt the future of history. Whatever else is happening now, history is alive and well and the AHA is determined to be one of the drivers of the conversation about what it means for the past, the present, and the future.

As program chair for next year’s annual meeting in DC, I followed a number of thematic arcs at the meeting in Denver. One of them tracked the work that contemporary historians are doing around the current political moment. I moderated a session called “Are We Teaching Political History?” which was developed in the wake of a New York Times op-ed published by Fredrick Logevall (Harvard Univ.) and Ken Osgood (Colorado School of Mines) in late summer of 2016. Their piece, “Why Did We Stop Teaching Political History?” bemoaned the decline of the teaching of political history—which they define as “a specialization in elections and elected officials, policy and policy making, parties and party politics”—in American colleges and universities. Perhaps they anticipated this, but these turned out to be fighting words—and the blogosphere lit up with talk, on all sides of the “political” aisle. (See an exchange on political history featuring Logevall, Osgood, and Marc Stein (San Francisco State Univ.) in the January issue of Perspectives on History.)

In the wake of the debate about their article on Twitter and beyond, I wanted to put together a session devoted to sustained dialogue about the issues involved. I recruited my colleague Leslie Reagan from the University of Illinois at Urbana-Champaign, Marsha Barrett from Mississippi State University, and Michael Kazin from Georgetown University for a roundtable discussion in the last session of the Denver meeting. The conversation was lively and touched on issues as diverse as the relationship of teaching to research; the role of nonacademic historians in shaping the historiography; the disconnect of students at all levels from the ordinary mechanisms of governing; the urgency of appreciating how scholarship on civil rights, sexuality, and social movements is also “political” history; and the ways that other fields—international history, empire, and South Asia—are grappling with similar questions. Despite being in the last session slot of the Denver meeting, there were 60+ people in attendance, and the conversation continued into the hallway and even in airport taxi lines as people headed home.

Though sparked by the immediacy of the original op-ed, our political history panel linked back to the plenary on Thursday night on the “First Hundred Days” of the new administration and what historians have to say about that. It also connected with a session on Friday on “Historical Expertise and Political Authority,” which similarly took off from the controversial op-ed in the Times by Stanley Fish on “Historians against Trump.” And, of course, it anticipated the 2018 annual meeting, whose theme is Race, Ethnicity, and Nationalism in Global Perspective and which convenes in Washington, DC.

The 2018 AHA annual meeting is in Washington, DC.

That theme, chosen by AHA president Tyler Stovall, has a very historically specific ring to it as we head into first few weeks of the Trump presidency. But though we are necessarily consumed by the here and now, as historians we are well aware of how important active engagement with all kinds of different pasts is. No matter what part of the world or what time period you work in, I hope you will consider submitting a panel and attending the 2018 AHA annual meeting. We are looking for sessions that address the theme but we are also seeking a full range of topics and approaches across a variety of times and spaces. We welcome contributions that engage with the current headlines and those that push against the preoccupations of the present as well. We are especially interested in different formats for panels and presentations so if you have suggestions along those lines, please let me or the 2018 Program Committee co-chair, Rick Halpern, know. Meanwhile, we extend our congratulations and thanks to 2017 Program Committee co-chairs Anand Yang and Edda Fields-Black, to their committee, and to all those at the AHA who worked so hard to put on such a stimulating meeting in Denver. History is hardly predictive, yet we also know it shapes the here and now and hence, invariably, what is to come. So come to DC in January 2018 and be part of what the AHA is doing to link past, present, and future.

Antoinette Burton is professor of history at the University of Illinois at Urbana-Champaign. She is also the co-chair of the 2018 Annual Meeting Program Committee.

We understand that historians across the world are concerned about the President’s recent executive order. For the AHA’s statement on the subject please see: http://blog.historians.org/2017/01/aha-condemns-executive-order-restricting-entry-united-states/