Can Scholars Help Save the Voting Rights Act? 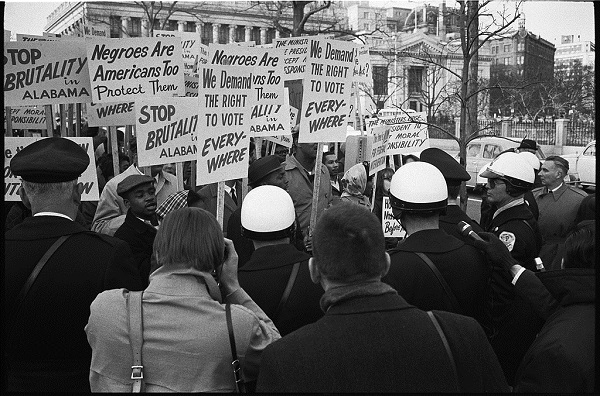 In January, the US Senate gathered for confirmation hearings on the nominee for attorney general, Jeff Sessions, who was denied a federal judgeship by a Senate committee in 1986 due to charges of racism. Of particular concern during the hearings, therefore, was how dedicated Sessions would be to enforcing what’s left of the Voting Rights Act. Potential problems for voting rights advocates wouldn’t stop with Sessions’s confirmation, though. Since the early 1980s, historians’ trial testimony has been crucial to the expansion of voting rights. Today, the number of historians with the expertise and research background that lawyers prefer is declining.

Peyton McCrary recently retired from the Civil Rights Division of the US Department of Justice, where he coordinated expert witness testimony in voting rights cases. “Historians have played significant roles [in voting rights cases] for 36 years now,” he said during the session “Historians as Expert Witnesses,” organized by the National History Center at the 2017 AHA annual meeting in Denver. As about 15 attendees listened, McCrary and his co-panelists Orville Vernon Burton and J. Morgan Kousser (along with chair Alan Kraut) explained what made historians so valuable as expert witnesses.

“Nobody but a historian could possibly figure out the intent underlying the adoption of the law in question.”

Historians first testified in a voting rights case in Bolden v. City of Mobile, which went to trial in 1976. As McCrary wrote in the Southern University Law Review, the plaintiffs sought to overturn the practice of at-large elections in Mobile, Alabama, and historians were not initially consulted. In 1980, the Supreme Court ruled that it wasn’t enough for the plaintiffs to show the effect of at-large elections; they also had to show that the intent behind the practice was discriminatory. The Court remanded the case to federal court. It was there, wrote McCrary, that attorneys called on historians and political scientists to show that at-large elections exclude minority representation and result in vote dilution. McCrary and Kousser presented detailed evidence about the history of elections in Mobile; the court eventually ruled against the city’s use of at-large elections.

Since Bolden, historians have become a near-constant presence in voting rights cases, which generally hinge on two questions. First, was a voting qualification or procedure adopted with racially discriminatory intent? Second, does the “totality of the circumstance of the local electoral process” (Section 2 of the Voting Rights Act as amended in 1982) suggest that an adopted voting qualification or procedure has had the effect of denying minorities the opportunity to vote or has diluted their voting strength? Historians’ expertise has provided evidence for assessing intent and totality of circumstance. At first, said McCrary at the session, “nobody but a historian could possibly figure out the intent underlying the adoption of the law in question.” Only historians had the professional skills to analyze historical sources, gather evidence, understand context, and arrive at meaningful conclusions. And historians used a variety of documents to get at the root of intent, including city records, census data, geographic records, legislative records, and newspaper coverage.

Historians’ testimony has had significant impact in voting rights cases. American University’s Allan Lichtman has testified in over 75 civil and voting rights cases (and was actually unable to attend the annual meeting due to an impending trial). In League of United Latin American Citizens v. Perry (2005), the Supreme Court cited an expert report of his in ruling that a congressional district in Texas violated the Voting Rights Act. In an interview, he also recalled a small but symbolic redistricting case involving Dallas County, Alabama (the seat of which is Selma), in which his testimony led the Court of Appeals “to require a system of fair districts to be drawn.” “I drew those districts in what became known as the Lichtman Plan,” he said. “In fact, one of the former white members of the [county] commission said, ‘If we adopt this plan, we might as well change the name of Dallas County to Lichtman County, Alabama!’ And he did not mean that in a complimentary way.”

Serving as an expert witness doesn’t necessarily follow an academic historian’s typical practice on the job. On the one hand, testimony must be based on evidence and meet professional standards of the discipline. On the other, appearing on the witness stand is part of an adversarial process, unlike the generally collaborative and collegial nature of the academy. “It’s not like giving an academic paper,” said Lichtman. Lawyers from the opposing side often produce counter-testimony from other experts, attempting to tear holes in the historians’ analysis. Lichtman also said that historians must “have the expertise to write and present analysis and information in a way that a layperson attorney and a layperson judge can understand.”

It isn’t hard to find historians taking part in cases involving Indian treaty rights, water rights, or European war crimes trials. Perhaps the best-known case is Brown v. Board of Education. Historians including John Hope Franklin, C. Vann Woodward, and Alfred H. Kelly assisted the NAACP in developing the argument that Congress and the states had anticipated public school desegregation in ratifying the 14th Amendment. The most contentious might be the sex discrimination case Equal Employment Opportunity Commission v. Sears, Roebuck and Company. Historians Rosalind Rosenberg and Alice Kessler-Harris testified on opposing sides, with the courts ruling that Sears had not engaged in sex discrimination in its hiring, promotion, and payment practices.

Historians who serve as expert witnesses in voting rights cases are frequently skilled in quantitative analysis, particularly in determining “racial polarization.” “The degree to which voting patterns were racially polarized is an important factor and is often referred to by judges as the linchpin of a voting rights case,” said McCrary. Determining whether voting is racially polarized usually requires statistical analysis of electoral data on the precinct level. In other words, historians in such cases perform statistical analysis and frequently call on research in other disciplines, particularly political science and sociology. Historians who can do this sort of work are rare. “I’ve had to explain to lawyers that there is no one with experience in testifying on the intent question in voting rights cases who isn’t either already collecting Social Security or is about to,” said McCrary. “They need new blood.”

“We are three old guys,” said Kousser. “We’ve testified for a long time in voting rights cases, and there are very few younger people coming up to take our places when we die.” Steven F. Lawson, professor emeritus at Rutgers, who has also served as an expert witness in voting rights cases, agrees. In an interview after the annual meeting, he said, “You’ll notice that this group—if you add me to it—and a few others who’ve [testified], consist exclusively of men. And, oddly enough, they’re white men.” Lawson explained that there was no “conspiracy” behind this—historians who’d begun testifying in voting rights cases in the 1980s and beyond were historians “who studied the political process and were interested in institutions like the courts.” When they were brought in on cases that proved successful, lawyers kept asking the same group of historians to testify. “They had a proven record,” said Lawson, and “success brought with it a certain type of repetition.” Furthermore, he explained, among younger scholars entering the discipline in the 1980s and the 1990s, a shift in research interests from formal political history to social and cultural history resulted in fewer historians with the requisite research background to testify in voting rights cases.

At the panel, Kousser emphasized that testifying was a “civic exercise” and one way for historians to “affirm our public purpose.” While testifying as an expert witness can be financially lucrative, it does not benefit scholars in an academic context, which often discourages younger historians from getting involved. Kousser recommended that such work be taken into account in hiring, promotion, and tenure decisions, in recognition of the fact that expert witness testimony requires an immense commitment of time and energy. If there were a clear benefit to their careers, panelists believed, younger historians and women would consider serving as expert witnesses.

There have been conferences and institutes to encourage and train historians, but Kousser said that these needed to happen in a more systematic fashion. Lawson also suggested that agencies that bring voting rights cases to court (including the ACLU, LULAC, NAACP, and the Department of Justice) must do a better job recruiting younger scholars from diverse groups to testify. Finally, McCrary noted that historians need to do better in equipping younger scholars with the tools, particularly quantitative and statistical skills, that would generate expertise to testify in voting rights cases. As a new administration moves into Washington, DC, and as the future of the Voting Rights Act hangs in the balance, these historians’ call could help determine the fate of the right to vote.