Clothes as Historical Sources: What Bloomers Reveal about the Women Who Wore Them

My interest in textiles came from my grandmother and her collection of carefully preserved family heirloom quilts. My favorite was the crazy quilt; my grandmother and I would spend hours examining the fabrics used in the patchwork and guessing if each piece had once been a man’s shirt, a woman’s dress, or perhaps a set of sheets. This early lesson in the importance of textiles has inspired my research on fashion, a flourishing field of study. Although textual sources describe clothing and images show how they looked, it is only through examining the clothes themselves—fabric, style, areas of wear and tear—that historians can measure the tastes of individuals and how this reflected the larger culture of society. 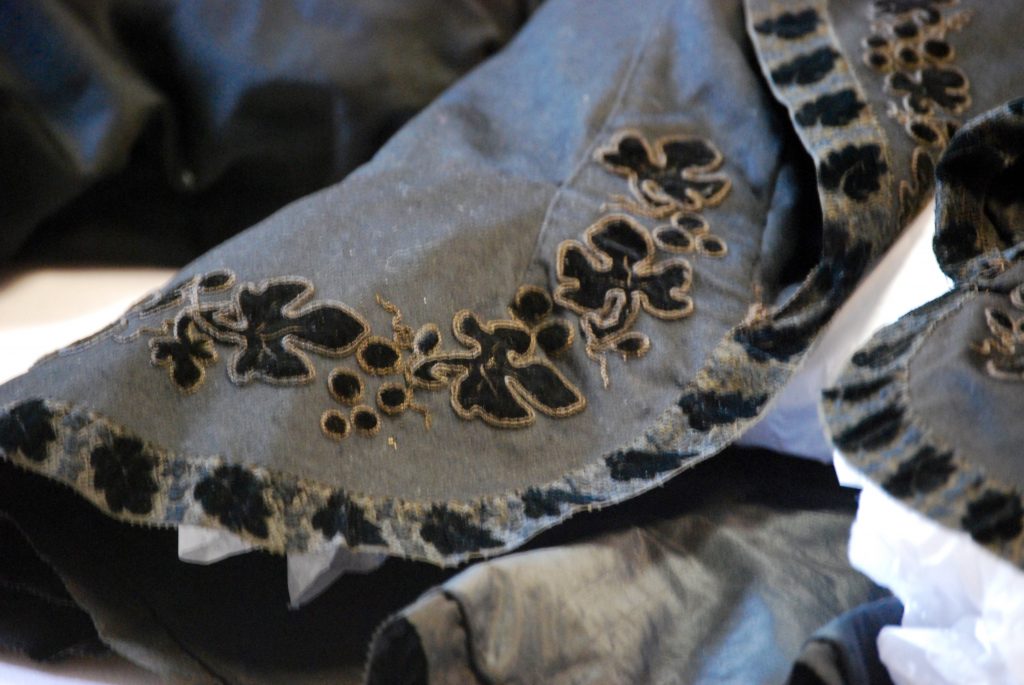 Silk applique and embroidered leaf detail on the jacket. From the collection of the Cortland County Historical Society

My research centers on the 19th-century American women’s dress reform movement and the cultural roles of fashion and anti-fashion. In my study, Peterboro, New York, plays a significant role. Peterboro—long appreciated for its significance to the history of the American anti-slavery movement—had an intriguing part to play in the antebellum women’s reform movement as well. In 1851, Peterboro resident and abolitionist Elizabeth Smith Miller became frustrated with her long skirts while gardening. In response, she began wearing a garment consisting of a shortened skirt and trousers. This clothing would become popularly known as the “bloomer costume,” after journalist Amelia Bloomer publically endorsed it. The bloomer costume would later be adopted as the uniform of the women’s dress reform movement. For women’s rights reformers, the bloomer costume symbolized their protest against ideas of feminine inferiority that, according to them, were perpetuated by fashionable clothing. Textual sources detail the experiences of reformers in wearing the bloomer costume, but provide few details about regular women’s adoption of dress reform. 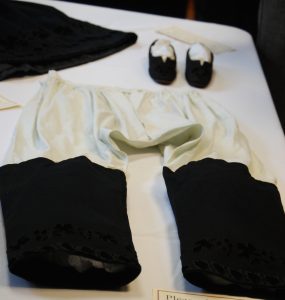 Front: white cotton bloomer trousers with black cotton sewn onto the lower leg to match the skirt; back: black slippers. From the collection of the Cortland County Historical Society

So, in the fall of 2013, when I was invited to Peterboro for a fundraiser to support the Gerrit Smith Estate National Historic Landmark and the Smithfield Community Association—an event that was all about women’s dress reform—I jumped at the chance. Called “In the Kitchen Tea,” the fundraiser featured tea and finger sandwiches, volunteers in re-created bloomer costumes, a brief history of dress reform, and songs about the bloomer. Most significantly for my research, an authentic bloomer costume from 1855, on loan from the Cortland County Historical Society, was also on display. And it had a fascinating story, one warranting further research and careful contextualization.

In 1994, the Cortland County Historical Society received a phone call from the Homer National Bank about a trunk that had been stored there for an unknown interval. Inside the trunk lay a bloomer costume along with documents indicating that it had been owned by Meriva Carpenter, a resident of Homer, New York (also the birthplace of Amelia Bloomer). How the garment came to be in the bank’s possession is unknown; piecing together where the garment fits into the history of dress reform required that I combine genealogy with a material analysis of the item itself—a “close reading” of the clothing. 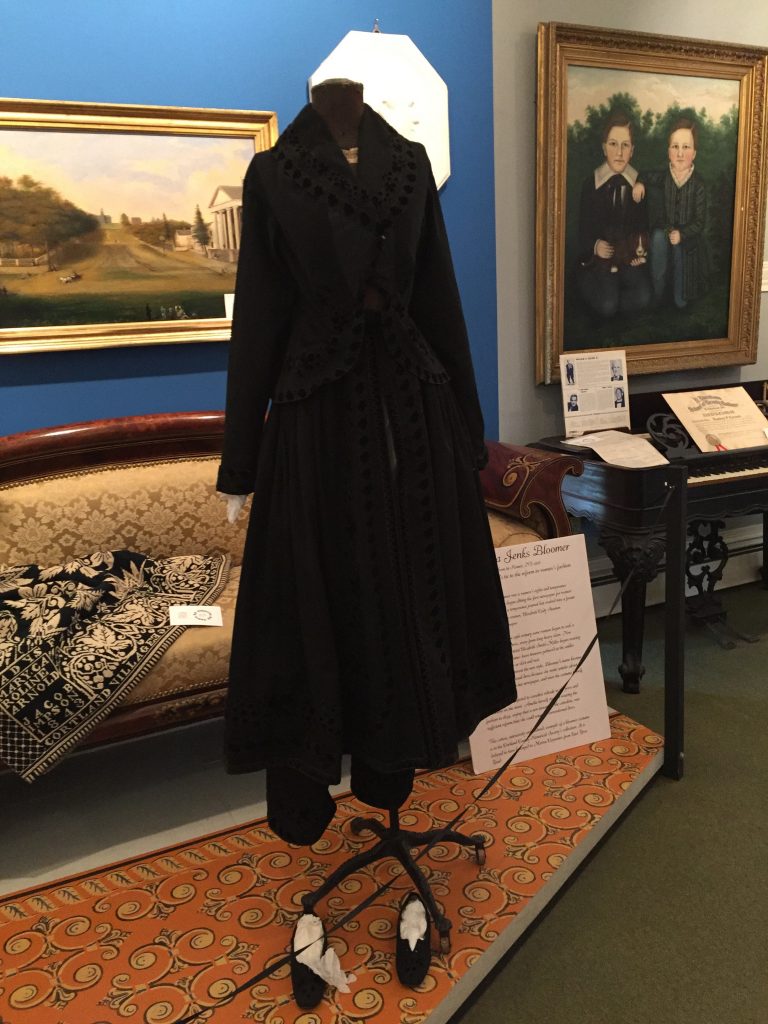 Full-length view of entire bloomer costume; pieces include jacket, skirt, trousers, and slippers. From the collection of the Cortland County Historical Society

Meriva Carpenter was a painter of miniatures; her husband a successful miller and dyer. Known around town for being “artistic,” Carpenter’s bloomer costume reflected her reputation. Made of black cotton with silk applique and embroidered leaves, the 1855 garment includes a black jacket with long, turned cuff sleeves. The black skirt buttoned down the front and ended below the knees, approximately 6 inches from the ankle. The waistband of the skirt connected to the jacket by buttons, making the garment appear as one piece rather than two. A blouse was likely worn under the jacket. The bloomer trousers are split leg and white with matching black cloth sewn from knee to ankle and cut straight, like men’s pants.

Carpenter’s garment differs from the written descriptions and photographs of the bloomer costumes owned by identifiable social reformers in several respects. First, the waist of the garment is cinched, indicating that a corset may have been worn underneath. Because one of the main platforms of dress reform was an anti-corset movement, it is curious that the garment would have been designed to include restrictive undergarments. Knowing that many women converted full-length gowns into bloomer costumes, my next question was whether or not the cinched waist indicated that this had originally been a fashionable dress. The hem of the skirt gave no indication that it had been altered, which suggests that Carpenter’s bloomer costume was constructed to be a reform dress rather than recycled from clothing she already owned. 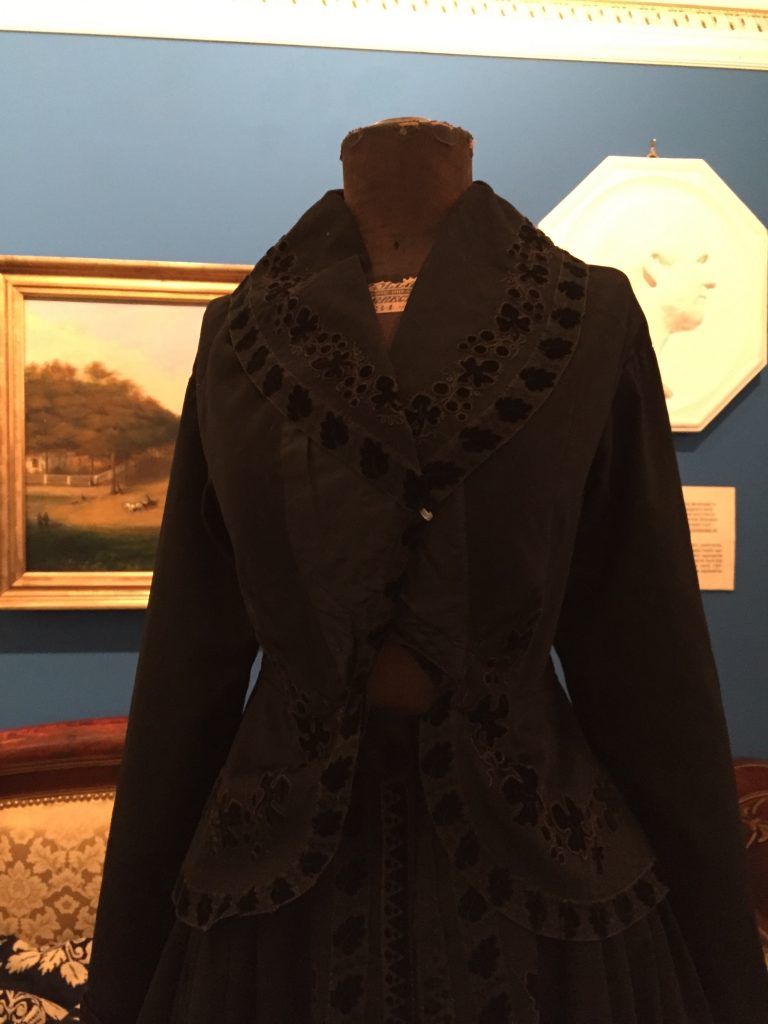 Bloomer jacket showing cinched waist suggestive of a corset. A blouse would likely have been worn under this jacket. From the collection of the Cortland County Historical Society

The bloomer trousers stood out as well. The original design recommended by Amelia Bloomer included harem pants. But women in upstate New York commonly wore their trousers in the style of men. Written accounts indicate that some women thought this design was more hygienic, while others felt that adopting male-inspired trousers more bluntly asserted their gender equality. It was exciting for me to compare these conjectures to material evidence from the period. And, though the bloomer costume was advertised as functional clothing, the detail work on this garment—the elaborate silk applique and embroidery that adorned it—implies that it was worn for show and not housework. I found no indication that Carpenter sewed her own clothing, and the skill level necessary to create such an elaborate garment suggests that she had it commissioned.

Historically the dress reform movement has been considered a failure because it did not result in any long-term changes in fashion. Many women complained that, while the idea of convenient clothing was appealing, the bloomer costume was ugly. Meriva Carpenter’s bloomer costume also reflects this view. The most radical element of the bloomer costume, the trousers, was embraced, but the fashionable hourglass shape is maintained and the embroidery is delicate and beautiful. This suggests that despite dress reformers’ assertions that men were compelling women to dress a certain way, women themselves embraced fashion. Carpenter, for example, saw the functional merits of shortening the skirt and adding trousers, but wanted a garment that was also attractive and feminine.

The Carpenters possessed the financial means to have such a garment made, but the question remains: did Meriva Carpenter actually wear her bloomer costume? Though the trousers and sleeves of the jacket show wear and tear and some sloppy repairs could be seen on both pieces, it remains unclear whether these are from age or from wear. What is apparent is that someone cared enough to patch the garment and to carefully store it in a trunk for safe keeping. Whether Carpenter owned a bloomer costume because she was sympathetic to women’s reform or because it appealed to her as an artist may never be known. But by analyzing extant clothing historians can address cultural questions unanswered by textual sources, such as how regular people interpreted social reform and whether or not these movements played a role in their daily lives. Determining the dominant textiles used, how a garment was constructed, the presence of any labels, and the wear and tear sustained by a piece can help to establish how it fit into the life and world of its owner, and the purposes it served—both functional and symbolic.

Laura Ping is a doctoral candidate at the Graduate Center, City University of New York. Her dissertation, “Throwing off ‘the Draggling Dresses’: Women and Dress Reform, 1820–1900,” discusses the ways in which fashion and function intersected in the 19th-century American dress reform movement. Ping is the recipient of the E.P. Thompson dissertation fellowship, a short-term research fellowship at Winterthur Museum, Garden, and Library, the National Society of Colonial Dames in the State of New York Dissertation Fellowship, and a Writing Across the Curriculum fellowship with the City University of New York. Ping is an adjunct lecturer in the history department at Queens College in Flushing, New York. Her forthcoming article, “‘He May Sneer at the Course We are Pursuing to Gain Justice’: Lydia Sayer Hasbrouck, The Sibyl and Corresponding about Women’s Suffrage,” will be published in New York History Journal. Ping holds a master’s degree in history from Virginia Commonwealth University and a bachelor’s in history from the University of Iowa.