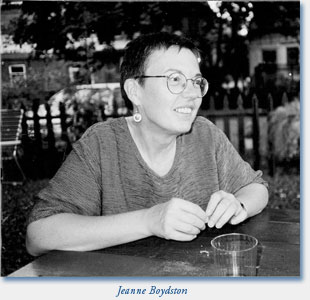 Beloved scholar of women and gender in the early Republic

Jeanne Boydston, a prominent historian of women and gender in the early Republic and a beloved teacher, colleague, partner, and friend, died on Saturday, November 1, 2008, less than six weeks after she was diagnosed with lung cancer. She is survived by her partner of nearly 20 years, Joy Newmann; her brother Robert; Joy’s children; their four grandchildren; a nephew and two nieces and their families; and numerous friends. Her parents, Donnell and Juanita (Laymance) Boydston, and her brother James predeceased her.

Jeanne Boydston was born on December 15, 1944, in Tulsa, Oklahoma, and was educated at the University of Tennessee and Yale University. She joined the University of Wisconsin’s Department of History and the Women’s Studies Program in 1988, having taught at Rutgers University-Camden for several years. At the time of her death she was the Robinson-Edwards Professor of American History.

Jeanne Boydston did not initially set out to be a historian. After graduating from college in 1967, she remained at the University of Tennessee to get a master’s degree in English, writing about Edith Wharton. She became deeply engaged in the civil rights and student movements, although she was distressed by the homophobia and sexism that hampered those struggles. The feminist movement drew her, and she spent the mid-1970s working at the Pennsylvania Department of Education, helping to implement the academic equality promised to girls by Title IX. In 1973, she wrote a Self-Study Guide to Sexism in Schools. She entered the PhD program in American studies at Yale in 1977, where she completed her degree in 1984 as Nancy F. Cott’s first advisee.

Jeanne Boydston’s 1990 book, Home and Work: Housework, Wages, and the Ideology of Labor in the Early Republic, which was selected as a Choice Outstanding Academic Book of 1991–92, transformed the study of women’s and labor history. Through a meticulous analysis of the economic contributions that housewives made, and of the implications of rhetoric about housework’s decline as labor, she argued that the ideology of separate spheres obscured the ways that unpaid housework bolstered American capitalism, even as it offered a rhetoric that sustained women’s invisibility.

These scholarly concerns—about the integrity of women’s labor, about its cultural invisibility, and about the power of gender to shape and obscure class and racial identities—continued to engage Boydston’s research. In several seminal articles (notably “Making Gender in the Early Republic: Judith Sargent Murray and the Revolution of 1800” and “The Woman Who Wasn’t There: Women’s Market Labor in the Transition to Capitalism”) she challenged historians to rethink the salience of gender and of class. Her article “Gender as a Question of Historical Analysis,” which appeared weeks after her death in the November 2008 issue of Gender and History, will surely generate new controversy, forcing historians to reconsider our uses of gender as a universal category for understanding the distribution of power.

Jeanne Boydston co-authored or co-edited several books, including The Limits of Sisterhood: The Beecher Sisters on Women’s Rights and Woman’s Sphere (1988); Root of Bitterness: Documents in the Social History of American Women (1996); and Making a Nation, a widely used textbook in U.S. history. In each case her collaborators benefitted from her astuteness, her lucid prose, and her conviction that every single kind of historical writing, like every kind of history student, mattered.

As a colleague and an administrator, Jeanne Boydston was rigorous and hardworking, filling numerous roles in the Department of History and the Women’s Studies Program, as well as serving on a wide array of committees in the College of Letters and Science and on behalf of LGBT Studies.

She was a brilliant and beloved teacher who won the Chancellor’s Distinguished Teaching Award as well as other honors for her teaching and mentorship. No listing of her scholarly work, awards, and publications can effectively measure her impact or convey the warmth with which students recall her generous guidance. In her modest way, she helped students know that their ideas had enormous value, while at the same time suggesting how they might polish the roughest ones into an elegant argument. The books and dissertations written by an entire cohort of Wisconsin-trained historians will long reflect Jeanne Boydston’s influence.

Boydston loved her work, and cherished the life of the mind that scholarship and teaching, at their best, could entail. But she never believed that academic life was the only, or most important, thing going on; she could be pointedly disapproving of academics’ sense of entitlement and self-importance. When there were budget cuts during the Reagan years, a reporter asked her to comment on the threats to student aid at Yale. She refused to give the quote he wanted, and insisted firmly that the far more damaging cuts were those to community colleges. She never lost that passion or that perspective.

Jeanne Boydston was passionate about art, literature, and the prospect of seeing Barack Obama become president. She loved Moby Dick, Their Eyes Were Watching God, and mysteries by Dorothy Sayers. She enjoyed traditional Native American flute music, beautiful writing, and her reading about Buddhism. She was a talented artist, who moved from working on small pen-and-ink drawings to more abstract watercolors and pastels. Boydston was captivated by the colors of the places that she and Joy visited, especially in New Mexico and Peru, where, in 2007, they climbed the Inca Trail to Machu Picchu. She loved, in all its details, the house she and Joy shared, where they spent hours on the deck overlooking Lake Monona, playing with their grandchildren, taking out their boat, or working in the garden.

For an essentially private person who preferred small groups to large ones, Jeanne Boydston touched the lives of an enormous number of people. On November 22, 2008, some 150 friends, family, and colleagues gathered in Madison’s Olbrich Botanical Gardens to view photos, recall her dry humor, and reflect on the conversations that will continue to influence us even as we grapple with her absence.

Donations may be made in Boydston’s memory to the “Jeanne Boydston Memorial Fund-UW Foundation” at the University of Wisconsin Foundation, U.S. Bank Lockbox, P.O. Box 78807, Milwaukee, WI 53278-0807. This fund will support the research of graduate students working in gender or women’s history.