The AHA and Its Publics, Part I 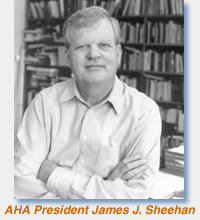 In 1955, David Van Tassel, who had just finished a dissertation on historical studies in America from 1607 to 1884 (published by the University of Chicago Press in 1960), agreed to write a history of the AHA to help celebrate the Association's upcoming 75th anniversary. He produced a 500-page manuscript that traced the AHA's development from its formation in 1884 until the eve of the Second World War. Unfortunately, Van Tassel, who died in 2000 after a distinguished career at Case Western Reserve University, did not complete the project. I recently read the copy now on file at the AHA's Washington, D.C., headquarters.

Van Tassel's account begins in the late summer of 1884, when a handful of members of the Social Science Association met at the United States Hotel in Saratoga, New York, to establish an organization of "professors, teachers, specialists, and others interested in the advancement of history in this country." Their purpose, according to Herbert Baxter Adams, a professor at Johns Hopkins and one of the driving forces behind the new enterprise, was "the exchange of ideas and the widening of acquaintance, the discussion of methods and original papers." An organization, Adams believed, would enable teachers and students to widen their horizons through cooperation and encourage "the friends of history" to learn from one another.

The social world in which the AHA was born reminds us of the novels of Henry James or Edith Wharton; even some of the names—Solon J. Buck, Moses Coit Tyler, Dunbar Rowland—have a certain novelistic sound. This was a world of resort hotels and railroad journeys, of clubs like the Cosmos in Washington and the Metropolitan in New York, of handwritten letters and black-tie dinners. Although the AHA was committed to admitting women "upon the same qualifications as those required of men," this was, of course, a world largely inhabited by white, Protestant males. The founders moved easily within the contemporary political elite: senators, former presidents, and cabinet secretaries, men much like themselves, with similar manners, interests, ways of life.

Although most of the early presidents of the Association had written some history, they were, by and large, much better known for their public roles as university presidents or statesmen than for their scholarship. The president in 1895, for example, was Senator George Frisbie Hoar, who had helped the Association get its congressional charter a few years earlier. It seemed natural that the Association's general headquarters should be in the nation's capital; indeed if it had been left up to its first secretary, Herbert Baxter Adams, the AHA's annual meetings would never have been held anywhere else. Washington, he realized, was where the mutual engagement of history and politics was both necessary and possible.

For most of its first 50 years, the Association's membership steadily increased; at the same time, it became a national organization, heavily concentrated in the Northeast but with an expanding base in the South, Midwest, and eventually even along the Pacific coast. Despite this expansion, the AHA's structure remained small and informal; for several decades, its business was conducted by two powerful secretaries—first Herbert Baxter Adams, then J. Franklin Jameson—it was governed by a self-perpetuating core of professors from a few colleges and universities. As late as 1958, Walter Prescott Webb of the University of Texas pointed out that of the 70 Americans who had preceded him as president of the Association, 63 had come from northern states (half of them from either Massachusetts or New York) and only two from west of the Mississippi. Webb claimed that he himself was the first president elected while teaching at a university in the West.

The founders of the AHA saw themselves as advocates for the study of history in all its forms; they tirelessly campaigned for the preservation of historical documents, demanded public support for archives and record collections, and sought to improve textbooks for the schools and to set higher standards for research and publication. From the beginning, the Association tried to serve several constituencies, including archivists, members of state and local historical societies, teachers, and amateur historians, who looked to it—and not always with success or satisfaction—for representation and support.

Despite the continued presence of diverse publics within its ranks, Van Tassel's history makes clear how the Association became increasingly dominated by historians who were employed at colleges and universities. Like the other scholarly organizations formed at the end of the 19th century, the growth and direction of the AHA was driven by the emergence of an academic discipline. This meant, first of all, the establishment of a clear institutional distinction between history and those branches of scholarship with which it had once been allied. For instance, while a professor at Brown, J. Franklin Jameson had led a campaign to establish separate history and political science departments. Jameson was also instrumental in the foundation of the American Historical Review, whose appearance in 1895 marked a milestone in the profession's disciplinary definition. Modeled on European journals like the Historische Zeitschrift, the AHR not only published historical research and circulated news about the Association, it also embodied professional norms and scholarly standards. From the AHR, one learned what it meant to be a historian—or, more precisely, what it meant to be a historian of a certain sort.

What our science most needs, Jameson wrote in 1891, is "thoroughly good second-class work." We gain more by "a large number of works of talent" than by "a few works of literary genius." Jameson believed that sound workmanlike research based on technical skills and rigorous use of evidence was more important than literary flair or large ideas. It was just this kind of thinking that led Theodore Roosevelt, who would reluctantly serve as president of the Association in 1912, to complain that the AHA had been taken over by "conscientious, industrious, painstaking little pedants" with the odd idea that if they could only connect enough facts "there would cease to be any need hereafter for great writers, great thinkers."

David Van Tassel clearly had mixed feelings about what he called the "long process of specialization and consequent fragmentation of the Association." He recognized the value of professional standards and accepted the inexorable growth of disciplinary institutions. At the same time, he sympathetically recorded those voices who lamented the discipline's fragmentation, worried about the loss of an engaged reading public, sought to make history a more effective part of primary and secondary education, and worked to give historians a more active role in public life. If it is to remain the national professional organization, Van Tassel insisted, the AHA would have to represent historians of all sorts, not just the academic specialist.

Reading Van Tassel's manuscript reminded me of how far the Association has come since those "friends of history" gathered in the parlor of the United States Hotel in 1884. None of them could have imagined that they were creating an institution that would become as large, complex, and diverse as today's AHA with its professional staff, elaborate committee structure, and varied functions. There is no better measure of how our Association differs from theirs than the size and character of the annual meetings. For decades, these meetings attracted two or three hundred members, who were expected to hear all the papers and to attend, in formal dress, an evening banquet. In 1913, when the program committee decided to schedule three sessions to run concurrently, some members made unkind comparisons to P. T. Barnum's circus rings. By 1921, the meeting had grown from 11 to a bewildering 25 sessions; in 1966, there were 75. In January 2005, those attending the meetings in Seattle had to choose among 250 different events. Paging through this year's program it is difficult to believe that it was once the custom of outgoing program committee chairs to summarize the findings presented at the annual meeting.

But despite all the many ways in which the Association has been transformed over the past 12 decades, there are still some strands of continuity that connect us to our founders. This continuity comes, I think, from the nature of history itself, which has become a scholarly discipline but remains of interest to a broad general audience, the subject of specialized research and of political significance, a profession composed of teachers at every level as well as archivists, museum officials, and public historians. Because history has many purposes, it has many publics. As David Van Tassel understood, if the AHA is to succeed, it must try its best to serve them all.

— James J. Sheehan (Stanford Univ.) is president of the AHA. The second part of this essay appears in the March issue.