When the Birds Go Silent

The December 2021 issue of the American Historical Review takes readers from sensory histories of wildlife conservation to transnational Black agrarianism and to the journal’s first experiment in open peer review. 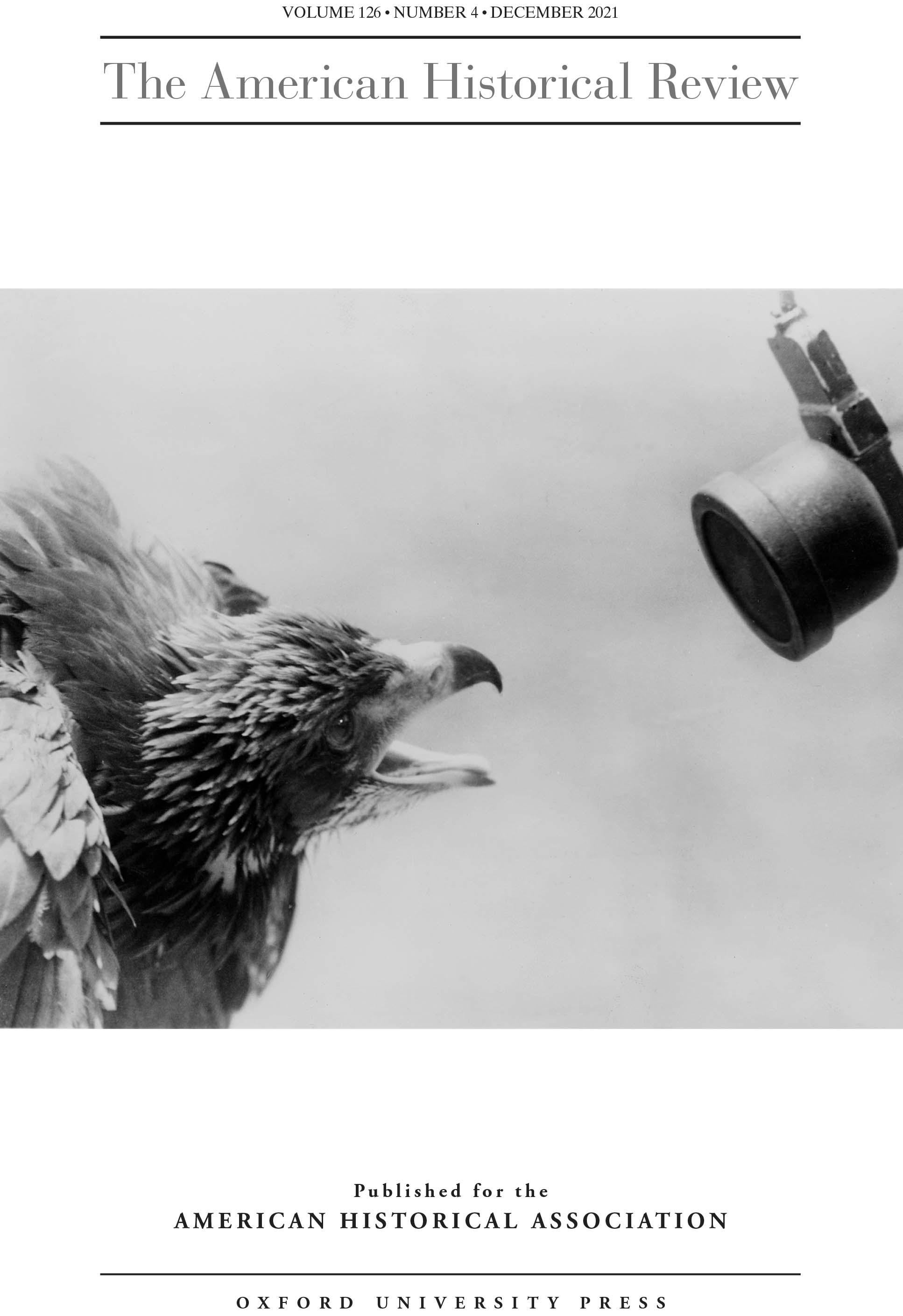 From February to July in 1935, an ornithological expedition jointly sponsored by Albert Brand, Cornell University, and the American Museum of Natural History made its way across the United States to collect “the voices of vanishing birds.” The ornithologists filmed and recorded more than 100 species, including the last verified documentation of the ivory-billed woodpecker. This photo shows the sound recording of a golden eagle in its nest. As Alexandra Hui demonstrates in her essay about the role of radio in the development of the American public’s association of silence with extinction, the collection of disappearing animal sounds was intertwined with public conservation programs from the start, bound together by sound and silence. “Hunting with a Mike,” Albert Rich Brand Papers, #21-18-899. Division of Rare and Manuscript Collections, Cornell University Library, Ithaca, New York.

In “Listening to Extinction: Early Conservation Radio Sounds and the Silences of the Species,” Alexandra Hui (Mississippi State Univ.) examines how 1930s radio programs in the United States used nature sounds to inform the public about wildlife extinction while simultaneously giving listeners new understandings of their natural environment. Positioning her work at the intersection of environmental history and sensory studies, Hui innovatively explores the role of hearing in the histories of human interactions with nature. She writes, “Recorded sounds were not intended to be specific; they were understood to represent the entire species. The subsequent potential silences of these sounds then meant more than the loss of an individual; listeners could hear future extinction.”

Three articles on Africa develop new conceptualizations of space and time to reframe older historical problems. In “The Only Industry That Can Make Us Hold Our Own: Black Agrarianism in South Africa from a Transatlantic Perspective, ca. 1910–1930,” Julia Tischler (Univ. of Basel) argues for the deep imprint of Black agrarianism on Black internationalism, progressivism, and antiracism. Employing a transatlantic lens, Tischler reconsiders the alleged conservatism of the Tuskegee Institute by showing how its ideas were transformed in a South African context, while at the same time highlighting the ways that segregationist ideas spread similarly among whites in the American South and South Africa. “Agricultural progressivism,” Tischler argues, “was a platform on which to build a Pan-African tradition of science and progress—a mutual vision of modern rural culture, travelling back and forth over the Atlantic, decidedly Black and, at the same time, a product of intellectual fusion and appropriation.”

Lasse Heerten (Ruhr-Univ. Bochum), in “Biafras of the Mind: French Postcolonial Humanitarianism in Global Conceptual History,” examines French humanitarian responses to the crisis in the famine-ridden Republic of Biafra during the Nigerian Civil War (1967–70) to offer a new conceptual approach to the history of humanitarianism. Arguing that previous historiographies have been concerned with “doing history backwards,” he focuses on a multitude of temporal experiences. “Writing such histories in the plural can help us move beyond stories of the origins of our present,” Heerten writes, “and at the same time develop a better understanding of the contemporary era’s specific conditions.”

In “Africa’s Revolutionary Nineteenth Century and the Idea of the Scramble,” Richard Reid (Univ. of Oxford) reconsiders Euro-centric notions of the Scramble for Africa. Africans, as he writes, had, “over a somewhat longer durée than is normally applied, a more prominent role in what are conventionally regarded the imperial and global forces for change.” In proposing this more Africa-centric assessment of the continent’s violent partition, Reid foregrounds the development of African politics, economics, and culture during the long 19th century. He suggests that these revolutionary changes across the continent did not vanish with colonization; rather, they fundamentally shaped its contours.

The silences meant more than the loss of an individual; listeners could hear future extinction.

Joseph L. Locke (Univ. of Houston–Victoria) and Ben Wright (Univ. of Texas at Dallas), in “History Can Be Open Source: Democratic Dreams and the Rise of Digital History,” argue for the co-existence of transparency alongside formal academic peer review. In a first for the AHR, their article underwent an open peer review that put into practice the authors’ call for expanding access and knowledge generation through digital history. The article and its open review process offer a way to test in real time propositions about the democratization of scholarship, the feasibility of open source as a part of digital history, and the trajectory of digital humanities and digital history within the academy. “History can be open source,” they write, “but the pursuit of democracy requires throwing off shackles more burdensome than copyright restrictions.”

Expanding on digital history in a History Unclassified essay, “Beyond 2020: Collecting Time Capsules in a Year of Pandemic” by Adam Clulow and Daina Ramey Berry (Univ. of Texas at Austin) documents the creation of a public and digital history project that moved beyond traditional tools of historical analysis as a way to create a shared community space for their university. The digital time capsules curated through this project, the authors write, “captured some of the raw emotion of a year in which society seemed to become unmoored from past certainties,” and they have become an invaluable teaching tool to reveal “how lived experiences both converged and split dramatically” during the pandemic.

History Unclassified in the December issue also explores Lula Livre, the launch of a massive letter-writing campaign in support of former Brazilian president Luiz Inácio Lula da Silva in the wake of his imprisonment after a controversial trial. In their essay “Lula’s Prison Letters and the Brazilian Presidential Papers: Archives, Readings, and Uses,” Luciana Heymann (Oswaldo Cruz Foundation) and Alexandre Moreli (Univ. of São Paulo, Brazil) illustrate how the Lula Livre campaign’s prison letters symbolize the importance of political correspondence from the most personal to the transnational. Lula is also the focus of a roundtable review on John D. French’s Lula and His Politics of Cunning: From Metalworker to President of Brazil. The reviewers offer a reading of Lula and his legacies from perspectives that range from LGBTQ+ studies to racial politics.

Two extended reviews close out the December issue. A roundtable review of the collected essays in Ambivalent: Photography and Visibility in African History explores the use of photography as an instrument of state surveillance, a medium promoting cross-disciplinary conversations, and a methodological tool that intersects with oral traditions. As one contributor suggests, in “moving us outside the frame of the photograph itself, by refusing to accept the photograph as the last word, Ambivalent’s contributors bring photography into conversation with orality, travel writing, ritual, and politics, with new approaches to questions of race, gender, age, time, and postcolonial and decolonial histories.” In her reappraisal of Michael R. Marrus and Robert O. Paxton’s Vichy France and the Jews, Julia S. Torrie (St. Thomas Univ.) demonstrates how this foundational work has changed the way historians understand anti-Jewish persecution and the Holocaust in World War II–era France.

In March 2022, AHR readers can look forward to a completely redesigned print journal. The first redesign of the AHR in 50 years, we hope it will heighten intellectual pleasures for readers as they engage with its content. The March issue will also bring the first edition of the AHR History Lab, a new section in the middle of the journal designed to open up an innovative space for collaborative projects that rethink how we do history in the 21st century.