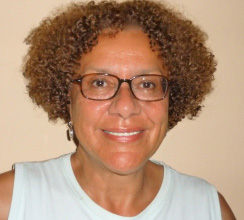 Miriam was born on June 11, 1951, in the coastal city of Aguadilla, Puerto Rico, to Arcelia Román Ruiz and Baldomero Jiménez Font. Her mother was a factory and health care worker and a hospital coordinator, while her father was a factory worker after service as a US Army private. The family migrated to East Harlem in New York City in 1952, where her sisters Carmen, Evelyn, and Awilda were born.

In her youth, Miriam developed a love of reading, helping her become an analytical thinker and creative problem solver. As a 1968 summer Saxtons River Project participant, she studied under internationally recognized Black sculptor John Torres at Vermont Academy, where she optimistically declared that she wanted “to make it on her own terms.”

Miriam graduated from Manhattan’s High School for Art and Design in 1969, where she studied illustration and advertising art and published insightful short stories for Prism, the school yearbook. She attended the University of Vermont for two years, spent a year at University of Puerto Rico, Rio Piedras Campus, and completed her sociology BA in 1974 at Binghamton University. She completed the coursework for a sociology PhD at Binghamton in 1987.

After relocating to Puerto Rico in the late 1970s, Miriam co-founded the feminist collective Encuentro de Mujeres and was assistant director of external resources at InterAmerican University. During her years there, she realized that the anti-Black attitudes she experienced growing up in the US were also present in the colony, albeit in different form.

After returning to the mainland US in 1983, Miriam published dozens of foundational works that critically challenged racial democracy, Taíno revivalism, blanqueamiento, and the US census. In 1987, she joined the Schomburg Center for Research in Black Culture, where she worked for a decade as a research coordinator and curator of exhibits and special programs. In these roles, Miriam worked with Student Nonviolent Coordinating Committee activist Roberta “Bobbi” Yancy, author Zita C. Nunes, and director Howard Dodson to produce widely celebrated international Africana exhibits. She became editor of CENTRO: Journal of Puerto Rican Studies, the premier organ of the field, from 1998 to 2001. She returned to the Schomburg as assistant director of the Scholars-in-Residence program from 2001 to 2004 and was a scholar-in-residence herself in 2010 to 2011.

As a visiting professor, Miriam taught innovative courses on Afro-Latinidad at Binghamton, Brown University, Columbia University, and New York University from 1991 to 2013. In 2005, she co-founded and was executive director of the Afro-Latin@ Project, which was renamed the AfroLatin@ Forum in 2007. The forum hosted two instrumental international conferences, Afro-Latin@s Now!, that assembled hundreds of artists, academics, and activists in 2011 and 2014.

As one friend noted, “We lost Miriam Jiménez Román, our unapologetically Black, Boricua, NYer, feminist, Marxist, intellectual luchadora. We must follow the road she paved for us, one of integrity, heart, and a conviction that change doesn’t happen unless we collectively fight for it.”