This past year has been deeply marked by a global pandemic of proportions not seen in a century and mass anti-racist demonstrations that have once again brought the question of racial equity and justice before the law into the court of international opinion. Whether through foresight or serendipity, the December issue of the AHR considers both these matters in depth. The issue features a pair of articles on pandemic history, a History Unclassified essay on illness and mortality, and an AHR Conversation on the topic of “Black Internationalism.” 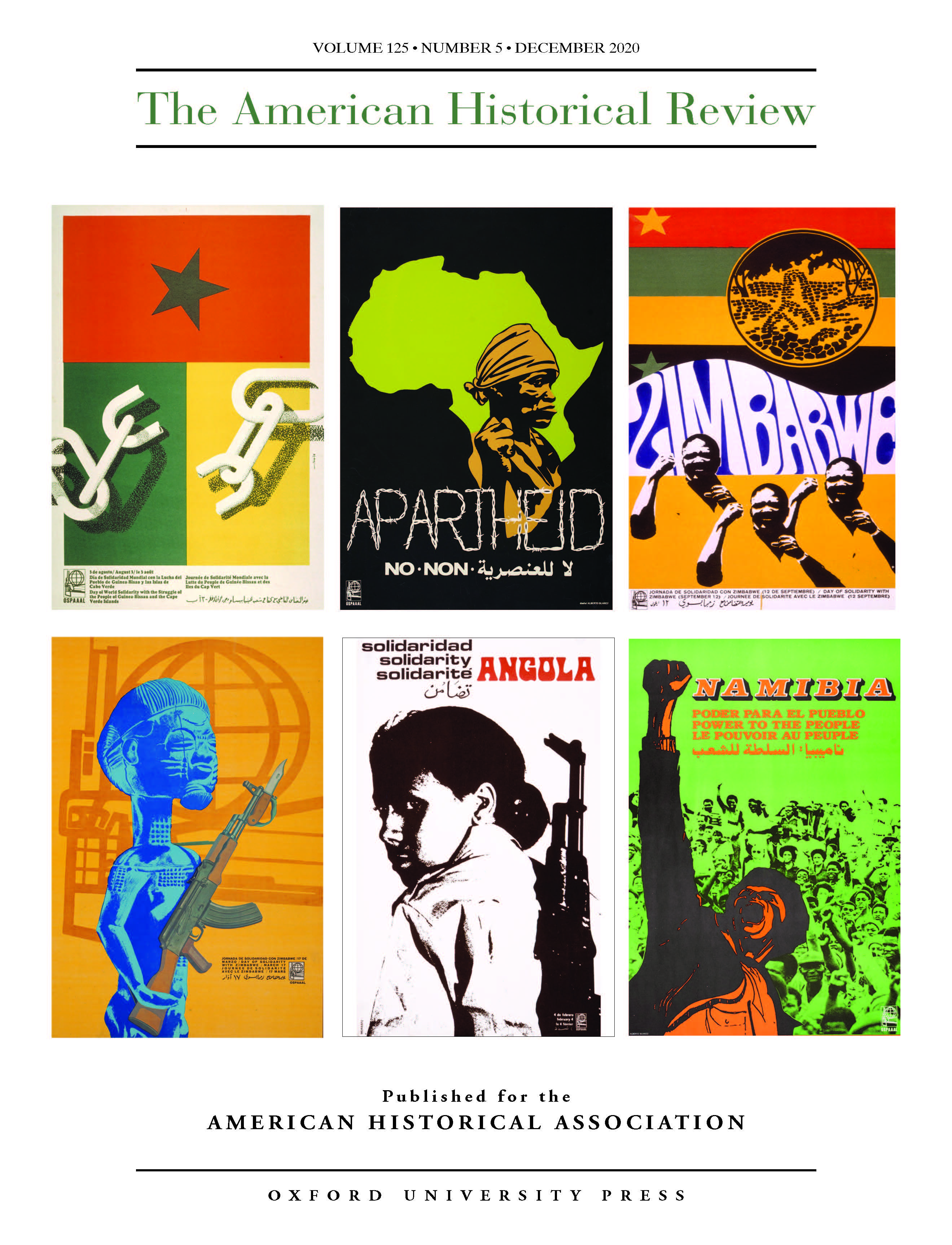 Between 1966 and 2019, OSPAAAL (Organización de Solidaridad con los Pueblos de Asia, África y América Latina) actively promoted Black internationalism, the topic of the annual AHR Conversation found in this issue. Based in Havana, OSPAAAL drew on the talents of Cuban artists to produce over 300 multilingual international solidarity posters, many focused on anticolonial and Black liberation struggles in Africa. Although often designed to promote Cuban foreign policy, the posters took on a life of their own as they circulated around the globe as foldouts inside OSPAAAL’s magazine, Tricontinental. These posters serve as reminders that, like New York, Paris, London, and Dar Es Salaam, Havana became an important center of Black internationalism in the second half of the 20th century. Six OSPAAAL African solidarity posters appear on the cover. All posters used by permission from the collection of Lincoln Cushing/Docs Populi.

The issue opens with “The Four Black Deaths,” a bold intervention in the plague debates by Monica H. Green (independent scholar). Green turns to genetic approaches to plague’s history to disrupt conventional definitions of the Black Death, often called the largest pandemic in human history, usually defined as the massive plague outbreak of 1346 to 1353 CE. As she shows, genetic evidence suggests that Yersinia pestis, the causative organism of plague, suddenly diverged in Central Asia at some point before the Black Death, splitting into four new branches. Drawing on a “biological archive” of this genetic evidence, Green traces the bacterial descendants of this divergence and compares that data to historical human activities in and around Central Asia a century before the devastating outbreak we know as the Black Death. The Mongols, she contends, unwittingly moved plague through Central Eurasia in the 13th, not the 14th, century. Grain shipments that the Mongols transported to several sieges, including the 1258 siege of Baghdad, were the most likely mechanism of transmission. The subsequent 14th-century plague outbreaks, amplified by climatic shifts, thus represent local spillover events out of the new plague reservoirs seeded by the imperial military campaigns of the 13th century, Green concludes.

A second, and quite different, intervention in epidemiological history is provided by Merle Eisenberg (Princeton Univ.) and Lee Mordechai (Hebrew Univ.) in “The Justinianic Plague and Global Pandemics: The Making of the Plague Concept.” If Green sees scientific evidence as opening new vistas in plague research, Eisenberg and Mordechai argue that science can overdetermine historical evidence. Rather than consider the history, etiology, and impact of a single outbreak, as Green does, they reexamine what they call the “plague concept” that scholars have applied to pandemics over the ages. Focusing on the case of the Justinianic Plague (c. 541–750 CE), they argue that this first major recorded plague pandemic retains its great historiographic power to explain significant demographic, political, and social changes during late antiquity because it evokes a terrifying myth of what plague should do—rather than because of conclusive evidence of what it actually did. Eisenberg and Mordechai suggest that the “plague concept” derived from the Justinianic case includes three key features—extensive chronology (lasting for two centuries), a catastrophic death toll, and a global geographic scope—and builds upon three interdisciplinary types of evidence: rats, climate, and paleogenetics. In order to explore how plague, as an idea, became an ahistorical, independent agent of historical change, they trace how scientists constructed the plague concept in the first half of the 20th century. Historians entered this discussion only in the last third of the century, and they relied uncritically on the plague concept to frame their arguments without problematizing it or any of its features that scientists had constructed decades earlier, Eisenberg and Mordechai maintain.

These articles can be read in conjunction with a deeply personal History Unclassified essay by Heather F. Roller (Colgate Univ.) about the intertwined experiences of family history, environmental history, and disease. In “A Shared Toxic History,” Roller traces her experience teaching an undergraduate course on “toxic history,” even while she and her mother both battled lymphoma. Her search for answers in family histories of illness explores how toxic exposure can connect people—mothers and daughters, teachers and students—in unexpected ways.

Genetic evidence suggests that Yersinia pestis suddenly diverged in Central Asia at some point before the Black Death.

Every December issue carries an AHR Conversation, bringing together six to eight scholars to engage in an ongoing interchange about a historical topic of broad import. This year’s subject—chosen months before the widespread popular mobilizations against racist police violence in the wake of the killing of George Floyd—is “Black Internationalism.” Participants Monique Bedasse (Washington Univ. in St. Louis), Kim Butler (Rutgers Univ.), Carlos Fernandes (Eduardo Mondlane Univ.), Dennis Laumann (Univ. of Memphis), Tejavsi Nagaraja (Cornell Univ.), Benjamin Talton (Temple Univ.), and Kira Thurman (Univ. of Michigan) bring a wide array of interests and areas of expertise to bear on the origins, evolution, and meaning of the concept of Black internationalism, its application within Africa, the US, and the African diaspora more generally, and its relationship to gender, nationalism, and anticolonialism. In addition to tracing the deep roots of this framework for writing the history of Black resistance to slavery, colonialism, and white supremacy as global phenomena, they insist on seeing Black internationalism from multiple points on the compass. Perspectives derived from the history—and intellectual production—of Africa, Europe, South America, and the Caribbean prove just as important as those emanating from the United States. As Bedasse puts it, “We have to constantly shift our center when we study the history of Black Internationalism.” The footnotes that accompany the Conversation offer a rich bibliography for those seeking to cross boundaries and expand their scope of knowledge in the field.

The issue also includes an article on the ambiguities of collaborative knowledge production in segregated South Africa. In “Writing Apartheid: Ethnographic Collaborators and the Politics of Knowledge Production in Twentieth-Century South Africa,” Joel Cabrita (Stanford Univ.) shows that throughout the 1930s–50s, the joint intellectual labor of both Africans and Europeans created a body of knowledge that codified and celebrated the notion of a distinct realm of Zulu religion. Examining the intertwined careers of Swedish missionary Bengt Sundkler and an isiZulu-speaking Lutheran pastor-turned-ethnographer, Titus Mthembu, Cabrita highlights the limitations of sharp demarcations between “professional” and “lay” ethnographers as well as between “colonial European” and “indigenous African” knowledge. Mthembu and Sundkler’s collaboration resulted in Bantu Prophets in South Africa (1948; 2nd ed., 1961), a book best understood as the joint output of both men, although Sundkler scarcely acknowledged Mthembu’s role in its creation. In the apartheid era after 1948, Cabrita argues, the idea that African religion occupied a discrete, innately different sphere had significant political purchase. As a representative African interlocutor for the apartheid state, Mthembu mobilized his ethnographic findings in order to argue for the virtues of “separate development” for South Africa’s Zulu community.