Casting a Wider Net: The National History Center at the 2014 Annual Meeting

In past years, the National History Center staff has planned most NHC panels at the AHA annual meeting. For 2014, we’re reaching out to a broad array of scholars and asking them to organize sessions they think will appeal to individuals who work in their own fields.

This process actually began at the 2013 meeting in New Orleans when documentary editor Holly Cowan Shulman, founding director of Documents Compass at the Virginia Foundation for the Humanities, approached me at one of our “Historians, Journalists, and the Challenges of Getting It Right” sessions. She asked if we had considered the role documentary editors play in the historical enterprise. The result is a 2014 Getting It Right session on the collaboration among documentary editors, archivists, journalists, and historians in revealing the complex interactions surrounding Richard M. Nixon’s opening of China. The panel will convene at 2:30 p.m. on Friday, January 3.

Shulman, editor of The Dolley Madison Digital Edition, recruited Jeremi Suri of the University of Texas at Austin to chair and secured as panelists David Coleman of the Presidential Recordings Program at the University of Virginia; Thomas S. Blanton of the National Security Archive at George Washington University; James Mann, journalist and China specialist, now at Johns Hopkins School of Advanced International Studies; and Steven Phillips, now of Towson University. As a member of the Office of the Historian, US Department of State, Phillips edited the Foreign Relations of the United States volume on China, 1969–­72, which won the Society for Historians in the Federal Government’s 2007 Thomas Jefferson Award for excellence in documentary editing.

“My goal was to showcase how different sectors of the historical profession add to our understanding of the past,” Shulman said, “I started with the question: In what ways do the editions we produce illuminate the past and help scholars for generations? How do we find, collect, understand, and use the documentation of the past, including eyewitness testimony and sound recordings?” 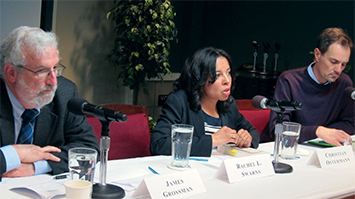 Our other two Getting It Right panels benefited from the center’s connection with New York Times columnist Rachel L. Swarns, who spoke last spring to the Washington History Seminar on her book American Tapestry: The Story of the Black, White, and Multiracial Ancestors of Michelle Obama. The center cosponsors the seminar with the Woodrow Wilson International Center for Scholars. Swarns organized a session—­“The Role of Genealogists, Journalists, and DNA Experts in Chronicling History”—­that draws upon her experiences in researching American Tapestry. She also helped us find speakers for “The Art and Craft of the Obituary,” which will feature tales from the trenches from veteran journalist Adam Clymer, who writes obituaries for the New York Times, and Adam Bernstein of the Washington Post’s obituary staff. Janice Hume, author of Obituaries in American Culture, will provide a historical take on the subject.

For the second year in a row, Historian of the US Senate Donald A. Ritchie has created a stellar panel drawing on theorists and practitioners of oral history. Entitled “Capturing the Voice of History: Publishing Oral History,” it will include Alessandro Portelli of the University of Rome, known in America for his work on Harlan County, Kentucky; Katherine Jolluck, whose work on women in Eastern Europe draws on oral histories; J. Todd Moye, who directed the Tuskegee Airmen Oral History Project from 2000 to 2005; and Linda Shopes, who writes on the role of oral history in a digital world.

Two junior scholars, Gail Hook of Northern Virginia Community College and George Mason University and Melissa Stuckey of the University of Oregon, proposed sessions drawing together senior historians and those early in their careers, a theme of many of the NHC’s endeavors. Hook will chair the roundtable “Modern Mediterranean Nationalisms: From the Greek War of Independence to the Arab Spring”; presenters will include distinguished historian of Islam John Voll of Georgetown, Ziad Fahmy of Cornell, Daniel Zisenwine of the US Naval Academy, and graduate student Katy Wiley of George Mason.

The center also will sponsor two sessions on the theme of decolonization: "Internationalism, Imperialism, and Social Change," on the Portuguese empire, and "Islands in the Stream of History: New Perspectives on Decolonization in the British Caribbean." It will cosponsor a third, "Decolonization and Federalism: Post-­World War II Experiments in the British Empire."