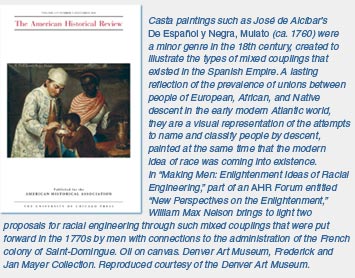 Members will shortly receive their copies of the December 2010 issue of the American Historical Review. The cover, pictured here, shows an 18th-century “casta” painting depicting a mixed coupling. The related essay by William Max Nelson is part of a forum entitled “New Perspectives on the Enlightenment,” which appears alongside two stand-alone articles, three featured reviews, and our usual extensive book review section.

The word “Enlightenment” has not been used in an AHR article title since Jonathan Sheehan’s October 2003 review essay, “Enlightenment, Religion, and the Enigma of Secularization.” This forum grew organically from a series of promising submissions, suggesting that the Enlightenment offers a rich genealogy for contemporary debates, and that Enlightenment scholars are once again asking big questions.

In “Rival Ecologies of Global Commerce: Adam Smith and the Natural Historians,” Fredrik Albritton Jonsson explores how the defense of global commerce pioneered in the Enlightenment was tied to the improvement of the natural order. Two rival ecologies, one made by natural historians and the other developed by Adam Smith and his liberal successors, vied for intellectual precedence as well as for practical application in the metropole and the colonies. Together they constitute the beginnings of an ongoing debate over the environmental foundations of capitalism.

William Max Nelson’s “Making Men: Enlightenment Ideas of Racial Engineering,” meanwhile, suggests a colonial and Enlightenment genealogy for racial ideas more commonly associated with the 19th and 20th centuries. He exposes unfulfilled pseudo-eugenic plans, focused on the French Caribbean colony of Saint-Domingue, in which racial engineering through controlled “breeding” was seen as a solution to challenges to stability after the Seven Years’ War.

Turning to Italy, Sophus Reinert takes on the conventional claim that the Enlightenment mainstream put its faith in peaceful laissez-faire economics. “Lessons on the Rise and Fall of Great Powers: Conquest, Commerce, and Decline in Enlightenment Italy” reveals a dynamic debate about the relationship between war and wealth, the nature of economic competition, and the causes of the decline of states. The concluding comment to the forum by Karen O’Brien observes the robust health of Enlightenment Studies and of the Enlightenment as a complex resource for contemporary debate.

The two stand-alone articles focus on the 20th century. Keith David Watenpaugh examines efforts by the League of Nations to rescue women and children survivors of the Armenian Genocide (1915). This rescue—a seemingly unambiguous good—was at once a constitutive act in drawing the boundaries of the international community, a key moment in the definition of humanitarianism, and a site of resistance to the colonial presence in the post-Ottoman Eastern Mediterranean. This historical case compels a significant amendment of the prevailing narrative of the history of humanitarianism and human rights which places much of its emphasis on the post-World War II era, the international reaction to the Holocaust, and the founding of the United Nations.

Justin Jacobs, meanwhile, explores the transition from empire to nationalized state in 20th-century Central Eurasia by drawing our attention to the life and many afterlives of the Kazak chieftain Osman Batur. The life of Osman the nomad reveals his exploitation of the crisis of Han legitimacy on the Chinese frontier and the colonial status of modern China. After Osman’s death in 1949, Chinese myths painted him as an unrepentant feudal bandit, serving as a kind of smokescreen for a nationalizing ethnic Han constituency. But in Turkish and Kazak guise, Osman became a larger-than-life Kazak nationalist who fought both Russian and Chinese “imperialists.” Tracing the life and the historical memory of Osman thus reveals very divergent legacies of Soviet and Chinese decolonization in Central Eurasia.

Jacobs is currently a graduate student in the modern Chinese history program at the University of California, San Diego. The publication of his elegant essay serves, we hope, to remind AHR readers that submissions are welcome from scholars at any stage of a historian’s career. The rigorous blind review process ensures that submissions are evaluated solely on merit, not on other factors such as seniority.
We look forward to publishing AHA President Barbara Metcalf’s address in the February 2011 issue, alongside articles dealing with barbarians ancient and modern, the first historian of human rights, the Baghdadi Jewish diaspora, and the scavenging imperial Soviet State.