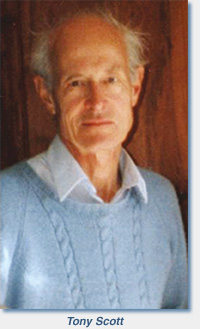 Tony Scott grew up in London, attended St. Paul’s School, and graduated from Oxford University with first-class honors in Modern Greats. He moved to New York to do graduate work in political science at Columbia University, but following the attack on Pearl Harbor he joined the U.S. army for a four-year stint. His knowledge of several European languages drew him into intelligence work; he participated in the invasion of Normandy and was wounded in the Battle of the Bulge, receiving a Purple Heart and American citizenship. He received his doctorate in history and political science in 1950.

For 30 years Scott taught history at the Fieldston School in the Bronx. Founded by Felix Adler in 1878 as the “Ethical Culture School,” the school has been influential in the field of progressive education. Scott published numerous books on educational topics. He was a contributor to the Introduction to Contemporary Civilization in the West: A Source Book, prepared for the contemporary civilization course at Columbia College (1946). That project led to Living Documents in American History (1963), one of the first collections of primary sources for classroom use. How to Use Folk Songs (1969) and Ballad of America: The History of the United States in Song and Story (1967) grew out of an organization whose newsletter Folksong in the Classroom he helped produce. Teaching for a Change (1972) articulated the central principles of the movement for “inquiry” education. Tony Scott was for some time the singer-on-the-green in Old Sturbridge Village, Massachusetts; he was an old friend of Pete Seeger.

Tony Scott was also involved in politics in different ways. He became active early in the civil rights movement and worked with Bayard Rustin organizing the March on Washington for Jobs and Freedom on August 28, 1963. He taught classes on the history of common law at the Rutgers University Law School in Newark, New Jersey, between 1964 and 1979. He participated in the battle for freedom of information in federal agencies, publishing in the AHA Newsletter “The FBI Files: A Challenge for Historians” (March 1980).

Scott served as a leader in the movement among historians to bring together schools and colleges in the teaching of history. In 1972 he helped found the Committee on History in the Classroom, which became an affiliated society of the American Historical Association in 1975. Scott contributed pieces to the “Teaching History Today” section of the AHA Newsletter: “Lowen v. Turnipseed: A Landmark Case” (October 1980) and “There is Another Way: United States History Texts and the Search for Alternatives” (May 1991, with a response by Gary B. Nash). He likewise served for over two decades on the board of the Society for History Education, which publishes The History Teacher. In 1977 he contributed to a discussion in the journal on “Beyond Western Civilization: Rebuilding the Survey,” along with such historians as William H. McNeill, Giles Constable, Frederic L. Cheyette, and Paul H. Tedesco.

Scholarly volumes on both European and American history are prominent in his list of publications. Republican Ideas and the Liberal Tradition in France, 1870–1914 came out in the Columbia Studies in the Social Sciences in 1951. He edited The Defense of Gracchus Babeuf before the High Court of Vendôme (1964) and wrote Woman against Slavery: The Story of Harriet Beecher Stowe (1978). He published numerous articles on the history of the law in the Rutgers Law Review, Civil Liberties Review, and the Women’s Rights Law Reporter.

Scott also wrote for the general public in producing The Story of America: A National Geographic Picture Atlas (1984). He edited The Living History Library (1967–76) for Alfred A. Knopf, a series of 15 books on topics in American history that included his own Hard Trials on my Way: Slavery and the Struggle Against It, 1800–60.

Tony’s wife of 61 years, Maria (Malville Haller) Scott, predeceased him in 2002. His daughter, Elizabeth Scott, of Brookhaven, NY, and his two sons, John W. Scott and Robert A. Scott, both of Holland, MA, led a memorial at the Center Meetinghouse, Sturbridge, MA, in August 2010.