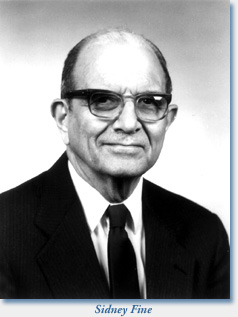 The line would start to form sometime around 12:30 every Wednesday afternoon during the academic year. At first there would be just two or three students, then half a dozen, then a dozen or more sitting quietly on the dingy hallway floor, waiting for Sidney Fine’s office hours to begin. They came to talk about their exams, their papers, their majors, their interests, and their families. Mostly, though, they came because they knew how much Fine cared about the history he taught—and about them.

Sidney Fine, the Andrew Dickson White Distinguished Professor of History at the University of Michigan, died on March 31, 2009, in Ann Arbor. He was 88.

Fine was born on October 11, 1920, in Cleveland, Ohio. Raised in a family that expected academic achievement, he excelled in the city’s public schools and at Western Reserve University, where he graduated the valedictorian of his class in 1942. That same year he married Jean Schechter. In the autumn of 1942 he began graduate school at the University of Michigan. But both his new family life and his studies were quickly interrupted by military service: he served four years in the Navy as a Japanese translator and interrogator, duties in which he took great pride. Fine returned to Michigan in 1946, received his PhD in 1948, and was immediately offered a faculty position. He stayed for 53 years.

In that time he produced a prodigious body of scholarship. In addition to two textbooks and a host of articles and reviews, Fine published nine monographs, the first in 1956, the last in 2000, the year before he retired. He was, first and foremost, an archival historian, less interested in shaping historiography than in carefully reconstructing pivotal points in the modern American experience. His highly regarded first book, Laissez Faire and the General Welfare State, set the standard. Drawing on an imposing range of sources, Fine painstakingly traced the shift in economic and political thought that undermined 19th-century liberalism and launched the age of reform. Thirteen years later he published what is, arguably, his most important book, Sit-Down, the definitive account of the epic 1937 strike that transformed American labor relations. After Sit-Down, Fine began work on what he considered to be his greatest project: a magisterial three-volume biography of the quintessential New Deal liberal, Frank Murphy. More than 15 years in the making, the Murphy biography is a tour de force of research, organization, and judicious analysis—Sidney Fine at his scholarly best. “When Fine completes his trilogy,” wrote Melvyn Dubofsky when the second volume appeared, “Murphy will have been better served by his biographer than any other non-presidential figure in American history, and even most presidents.”

Fine combined his commitment to scholarship with a passion for teaching. His two-semester sequence in modern American history was legendary on Michigan’s campus; each year some 500 students took it, with many more turned away because the lecture hall wasn’t big enough to hold them all. In the classroom he was a traditionalist. Three days a week he stood for an hour behind a podium delivering carefully crafted, densely-packed lectures without an overhead projector, an illustration, or even a map to help him. He was absolutely riveting. Partly it was the depth of learning that made his presentations so compelling. It was also the fervor he showed for his subject. It mattered to Fine that the Senate had rejected the League of Nations or that the Roosevelt administration had turned its back on European Jewry. And he made it matter to his students as well.

Fine was a demanding teacher, as his more than 40 PhD students can attest. I remember picking up a dissertation chapter he had read. At the top he had written, in his almost illegible scrawl, “This is ok.” For days I lived off such effusive praise. As hard as he pushed his students, though, he was also fiercely devoted to them. He looked forward to the hours he spent talking with undergraduates, and was just as happy discussing Michigan football—he had season tickets on the 50-yard line—as he was talking about lecture material. He never failed to ask how a student was coping with a difficult situation he or she had mentioned. And no one worked harder for his graduate students, from the moment they entered the program, through the job search, and long after they had settled into their careers. “There is an expression in Yiddish which describes what Sidney exemplifies,” one of his PhDs said years ago. “It is menschlichkeit, humanness.”

In the course of his career, Fine received a number of awards, among them a Guggenheim Fellowship (1957), eight book awards, three honorary degrees, and a special recognition from the Michigan legislature, which in 1991 eliminated the state-mandated retirement age of 70 just so he wouldn’t have to stop teaching. In 1984 the University of Michigan awarded him its highest honor for scholarly distinction, the Henry Russel lectureship. Nine years later the university’s undergraduates gave him their Golden Apple Award in recognition of his brilliant work in the classroom. No other member of the Michigan faculty has ever won both awards.

Fine is survived by his beloved wife Jean; their daughters Gail and Deborah; grandchildren Daniel and Emily; and a vast contingent of students, some 25,000 strong, whose lives he touched.