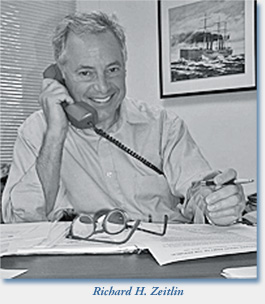 Richard H. Zeitlin, historian and director of the Wisconsin Veterans Museum for more than 25 years, died on December 3, 2008, after a short but courageous battle with cancer. He was 63 years old.

When Zeitlin joined the Wisconsin Veterans Museum, it consisted of a room in the state capitol building dedicated to Civil War relics. Under his direction a new state-of-the-art museum was constructed between 1989 and 1993. Zeitlin supervised this major redevelopment, working closely with designers and historical experts to create an internationally known military history institution. He continued to direct the museum and presided over its continued success until his death. At that time it contained over 20,000 objects, hosted a major annual lecture series by internationally known historians, attracted an average of 11,000 visitors each month, and provided a moving educational experience for veterans and non-veterans alike. Zeitlin also remained active with the Wisconsin State Historical Society and was a frequent consultant for, as well as a guest on, local and statewide media. Wisconsin Secretary of Veterans Affairs John A. Scocos referred to him as a “state treasure.”

Zeitlin also published a series of books and articles, primarily but not exclusively on Wisconsin history, military history, and the Civil War. These included Germans in Wisconsin (1977, 1985, 1991, 2000), All for the Union: Wisconsin in the Civil War (1998), The Flags of the Iron Brigade (1997), U.S.S. Wisconsin: A History of Two Battleships (1988), and Old Abe the War Eagle (1986). He also taught U.S. military history at Edgewood College and the University of Wisconsin-Madison. He served on the Wisconsin State Historic Preservation Review Board and the Dane County Cultural Affairs Commission, both of which he chaired, and was a member of the Board of Presidential Advisers for the National World War II Museum in New Orleans. He was also an active member of the Society for Military History (SMH) and organized two memorable SMH conferences in Madison: a special 1998 regional conference in honor of Professor Edward M. Coffman, and the highly successful 2002 annual conference.

Richard Zeitlin’s knowledge of and interest in history, especially military history, were legendary. So were his warmth, kindness, and gentleness, as well as his incredible smile. These attributes gave many of us a friend and colleague whom we treasured and will never forget, and together with his impressive managerial skills, helped make the Wisconsin Veterans Museum the outstanding institution that it is today.

Zeitlin is survived by his significant other Jackie Johnson of Madison, Wisconsin; his children Samuel and Eleanor Zeitlin, who are presently students in Munich and New York; his mother Mildred Zeitlin of New York City; his brother and sister-in-law Alan and Sherri Zeitlin; and his niece Brigitte Zeitlin. He was buried in New York on December 7, 2008, and a memorial service was held at the Wisconsin Veterans Museum on March 21, 2009, which would have been his 64th birthday. A room dedication and military history conference in his honor will be held at the Veterans Museum December 11–12, 2009. A special fund has also been established in his honor. Donations can be sent to the Wisconsin Veterans Museum Foundation, Attn: Richard Zeitlin Memorial Fund, P.O. Box 2657, Madison, WI 53701-2657, or by visiting the foundation’s web site at www.wvmfoundation.com. For additional information on the December military history conference, contact Jeffrey Kollath at Jeffrey.Kollath@dva.state.wi.us.

—Mark A. Stoler
University of Vermont and the George C. Marshall Foundation